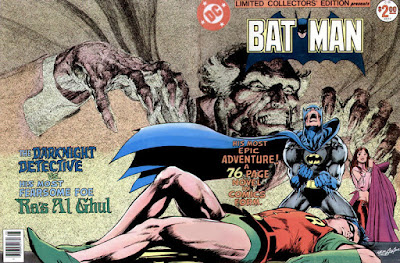 Batman had faced a few impressive villains over the years, but, Ra's Al Ghul was one who was more impressive than most.

The tales that introduced Ra's Al Ghul to the Batman universe were larger than life, and the earliest of them were collected in the Limited Collectors' Edition #C-51 (August, 1977), with this stunning Neal Adams cover.

Now, the issues which introduced Ra's to Batman, and the world!

Daughter Of The Demon 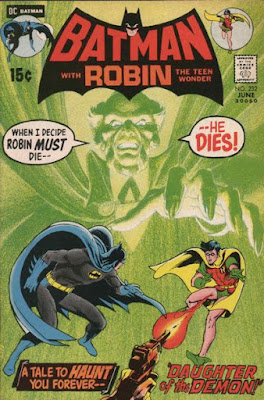 First up, the premiere of Ra's Al Ghul, from Batman #232 (June, 1971) by Denny O'Neil, Neal Adams and Dick Giordano, under an incredible cover by Adams and Giordano!

Robin starts the issue at Hudson University, and is kidnapped by mysterious figures.  A note is sent to Batman at the Wayne Foundation, informing Bruce they have Robin.  Needing more resources, Batman heads back to the Batcave at Wayne Manor....and finds Ra's Al Ghul and his servant, Ubu, in the Batcave.  Ra's had deduced that Batman was Bruce Wayne, because he needs help...his daughter, Talia (who had been introduced in Detective Comics #411) had also been kidnapped by the Brotherhood of the Demon.   Batman, Ra's and Ubu then have to travel the world searching for Robin and Talia (all the while, Batman being put in danger, and thinking about Ra's and Ubu).

Finally, Batman finds Robin....and realizes that Ra's is the head of the Brotherhood of the Demon, and that this was a test by Ra's Al Ghul, to see if Batman is worthy of his daughter, who loves "the detective", Batman! 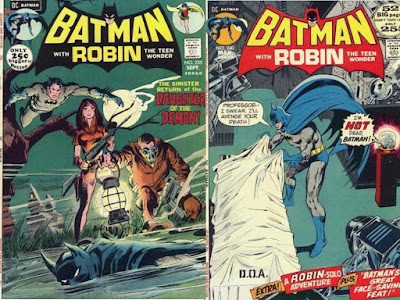 Ra's and Talia come back in Batman #235 and #240, by Denny O'Neil, Irv Novick and Dick Giordano, with covers by Adams and Giordano, but they weren't included in this collection.  What is important about these tales is that Batman realizes he needs to deal with Ra's and his organization, and that he doesn't like them being able to strike against his alter ego of Bruce Wayne. 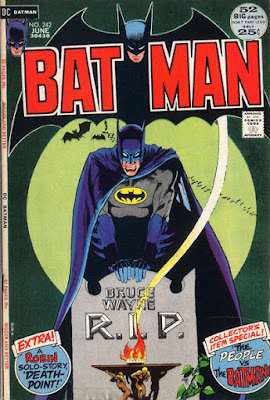 This collection picks up with Batman #242 (June, 1972), and a cover by Mike Kaluta, story by Denny O'Neil, Irv Novick and Dick Giordano.

Batman and Commissioner Gordon start the story, by discussing the recent presumed death of Bruce Wayne in a plane crash.  Batman then informs Gordon he will be out of Gotham for a time (though doesn't tell him that he will be tracking down Ra's).  First, Batman has an encounter with criminal Matches Malone (which doesn't turn out well for Matches, who is killed during it by a sniper's bullet).  Batman, using this to his advantage, takes over the identity of Matches Malone, and does a little recruiting of his own...scientist Dr. Harris Blaine and assassin Lo Ling, both who have been forced to work for Ra's, but resent Ra's for the criminal activities he forces them to perform. 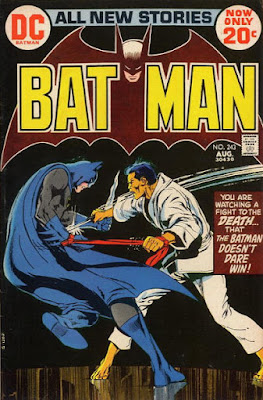 The story continues under a Neal Adams cover for Batman #243 (August, 1972), by Denny O'Neil, Neal Adams and Dick Giordano.

The story starts with a battle between Batman and Lo Ling...with Matches Malone watching.  Ling explains he owes Batman (and Matches was really Robin, using an inflatable body suit to get the size of Batman/Matches).  Batman, as Matches, takes Ling and Dr. Blaine in pursuit of Ra's, meeting ski champion Molly Post, who has a vendetta against Ra's for killing her fiance.  The group runs afoul of Talia and Ubu, but do find Ra's in one of his headquarters....but, Ra's is dead!

The group leave, but Ra's is put into the Lazarus Pit...and returns to life! 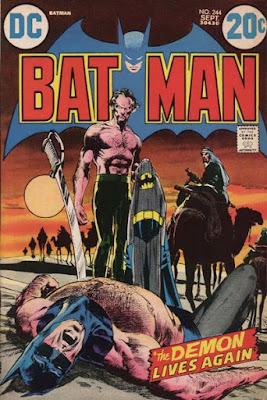 This story, and the collection conclude with Batman #244 (September, 1972) by Denny O'Neil, Neal Adams and Dick Giordano, originally under this historic cover by Neal Adams.

The group attempt to leave the Swiss Alps, but are pursued by a maddened Ra's, who nearly kills Ling.  Ra's and Talia leave via hovercraft, with Batman and Molly following on skis, until Batman damages the craft, but Molly gets injured in the crash, with Batman having to stay with her as a less mad Ra's and Talia leave.  Ra's knows he has used the Lazarus Pit too many times, and wants Batman to be his successor and marry Talia.  Batman tracks the pair to the desert, where Batman and Ra's have a final duel, much to the chagrin of Talia who loves them both.  Beating both Ra's and the dangers of the desert....Batman is able to capture Ra's, taking him to justice. 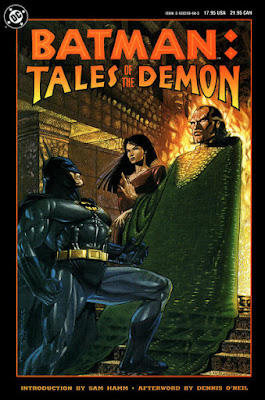 These stories establish Ra's Al Ghul as a major league villain in Batman's world (very much like a James Bond villain, with references to Bond in many of these stories).  Every battle between Batman and Ra's Al Ghul would then be a major event!

All seven of these stories (and a few more) are included in the 1991 collection, Batman: Tales Of The Demon, with a cover by Brian Stelfreeze, foreword by Sam Hamm and afterword by Denny O'Neil, but it is still better to enjoy every tale presented in the Treasury sized edition!