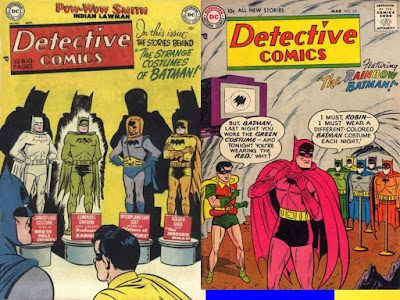 Usually, Batman tried to be a creature of the night, hiding in the shadows, trying not to be seen by the criminal element (until he needed to make frightful entrance to instill fear in their hearts).

But, for a few issues of Detective Comics, Batman was a bright beacon in his costumes instead!

The Strange Costumes Of Batman 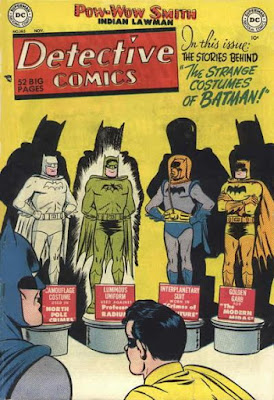 With Detective Comics #165 (November, 1950) by Edmond Hamilton, Dick Sprang and Charles Paris (all under a cover by Win Mortimer), readers saw quite a few alternative Batman outfits.

A camouflage white for fighting criminals in the snow, a glowing green to fight a radioactive foe and even a golden outfit so Batman could battle a modern day King Midas were just a few of the colorful costumes in this issue.  Other, more practical outfits made it as well, such as an interplanetary outfit (so Batman could fight crime in space), an outfit with glider wings (allowing Batman to survive what could have been a disastrous fall), an asbestos costume (to combat fire), a thin cellophane costume (to be hidden and used in prison) and even a scuba outfit (enabling Batman to fight undersea crime). 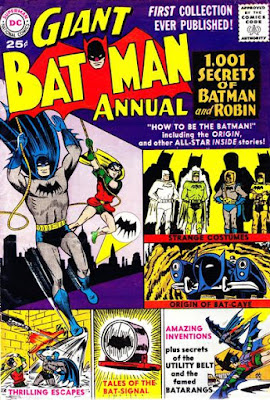 Still, the oddest of all Batman outfits was one that hadn't been used until the villain Dr. Darcy injured Batman.


This Batman suit was for Robin (allowing the Boy Wonder to impersonate Batman, keeping Gotham safe while Batman recovered from an injury).


This issue has been reprinted many times, including with the first Batman Annual of 1961, which itself has a replica edition, as well as being in a reprints of Batman Annuals. 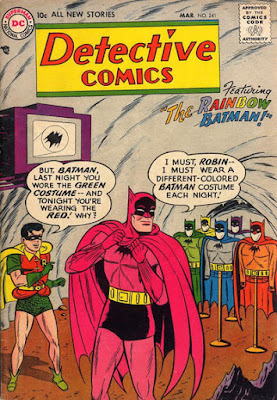 Detective Comics #241 (March, 1957) by Edmond Hamilton, Sheldon Moldoff and Stan Kaye (covered by Sheldon Moldoff) showed a much brighter Batman, with the head of the Dynamic Duo adopting a different color costume every day!

The action starts with young Dick Grayson saving a girl from some robbers, but they got away (and Dick injured his arm in the process).

Batman and Robin would then search for these robbers (as Dick could identify them), but Batman started wearing very colorful costumes as the Dynamic Duo were looking for these thieves.

The costumes got brighter and brighter, until Batman was literally "the rainbow Batman", as they finally found the criminals (after which, Batman went back to his original costume). 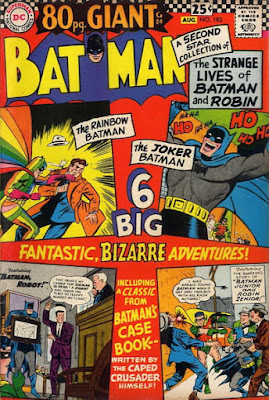 Why the sudden colorful costumes?

Well, it was all for Dick.

Not wanting the crooks to see Robin had the same injured arm as Dick Grayson, Batman took to these colorful costumes to distract the villains, allowing them to be captured without revealing Dick Grayson's identity as Robin...

....which they may have been able to figure out, if they took the time to look at Robin's injured arm, and put two and two together...

The most colorful costume of them all finally made it onto a cover, as the story was reprinted in Batman #182 (July-August, 1966). 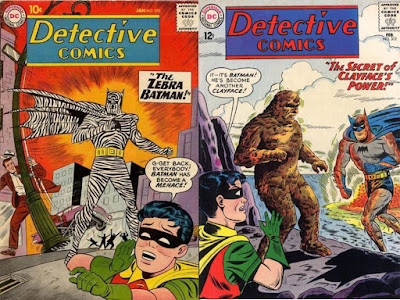 Of course, Batman had a few transformations, that changed him and his costume as well, such as a time when he became the "Zebra Batman" as well as another time when he took a dip in the pool of chemicals and changed himself into the "Clayface Batman" to fight Clayface, but those were in the 1960s (even though Michael Cho included them on his 1950s tribute cover for Detective Comics #1000....many of Batman's looks which have been covered lately!).