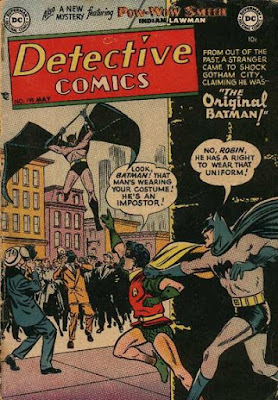 Gotham City only had one Batman.

Keeping his secret at Wayne Manor, Bruce Wayne was the original Batman, right?

But, who was this masked man? 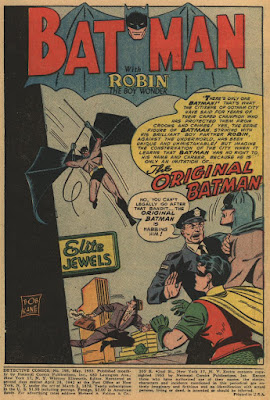 In a story drawn by Dick Sprang and inked by Charles Paris (with the writer lost to history),  circus acrobat, Hugo Marmon, who had used the name of "Bat Man" in his circus act, could lay claim to being the original Batman....a problem for the head of the dynamic duo, as Gotham law only allowed "the original Batman" to wear a Batman suit (or anyone he allowed).

For a while, Marmon allowed Batman to operate, but a conniving criminal, John Vulney, worked on Marmon's vanity, convincing him to have him petition Commissioner Gordon to keep Batman from working in Gotham City (as Marmon then did, first just to showcase his acrobatic talent, then trying as an incompetent crime fighter).

Batman then took off with Robin, outside the city.  Finding a circus, Batman planned to take over as their acrobatic act, while he had Robin do a little research around local circuses (due to Dick's connection to them from his Flying Graysons days). 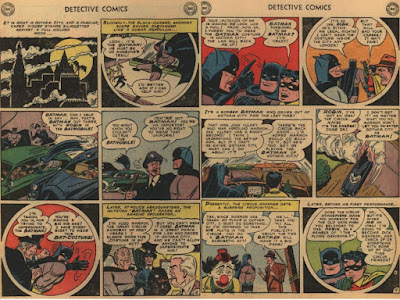 Batman then did the circus act....horribly, making sure Marmon found out.  Outraged, Marmon demanded to take Batman's place at the circus, allowing Batman to again wear the costume in Gotham City for one more day.  Batman was then able to capture Vulney.  Robin returned with news, the circuses Marmon performed in never worked in Gotham proper, only outside the city, thus Marmon was never Batman IN Gotham, making Batman the original Batman again. 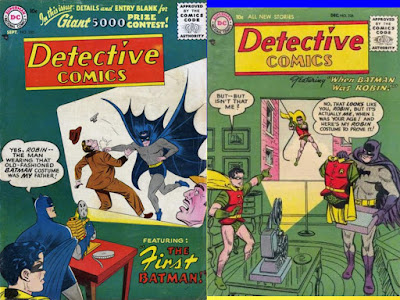