The Adventures of Batman As A Lad 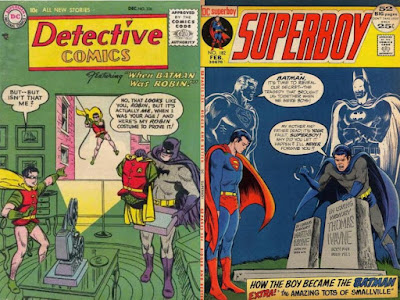 ...but, he took other identities along the way.

Here is two of Bruce Wayne's earlier attempts to prepare for a life of fighting crime. 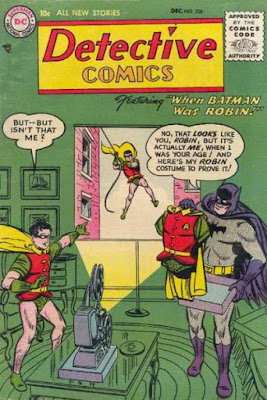 In Detective Comics #226 (December, 1955), readers (and Dick Grayson) learn of the time "When Batman Was Robin" (by Edmond Hamilton, Dick Sprang and Charles Paris, all under a cover by Win Mortimer).

Bruce Wayne is mailed a Robin costume by Harvey Harris, a great detective who has recently passed.  Batman tells Robin the story of how he went to train with Harvey Harris, wearing that costume (where Harvey gave young Bruce the identity of Robin, and Bruce got detective training as he also had to try to keep his own identity safe from the cunning private investigator). 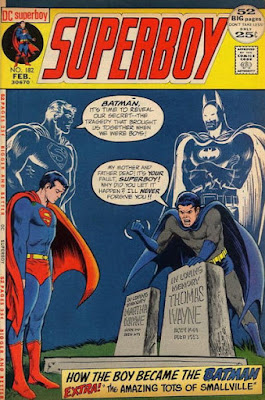 The second tale is a little less of a happy one, as readers (and Superboy) see "The Forging Of Young Batman" in Superboy #182 (February, 1972) (by Leo Dorfman, Bob Brown and Murphy Anderson, under a cover by Nick Cardy).

This time around, Superboy (Superman as a boy) meets up with Bruce Wayne after the death of Thomas and Martha Wayne, to see an obsessed boy, searching for his parents killer (thinking it might be the work of a zodiac killer).  Superboy, attempting to help his friend, provides him with a costume, and accidentally suggests the name of "Batlad", which is shot down by Bruce, who takes the name of the Executioner, as he prepares to wage war on crime.  Thankfully, Superboy was there to prevent Bruce from going too far, and they do capture a criminal, but not one guilty of the crime of murder.

Bruce Wayne had many more tales adding to his basic origin, as well as a few more first meetings with Clark Kent's alter ego on his way to becoming the guardian of Gotham known as Batman.