Wonder Woman It's A Living 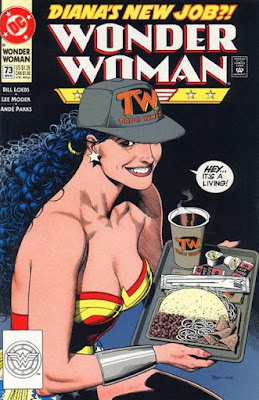 Looking back at Wonder Woman comics, finding a little oddity like this, Wonder Woman #73 (April, 1993), when Wonder Woman wasn't quite as popular with the fans, even with these stunning Brian Bolland covers.

Wonder Woman hadn't been reduced to slinging tacos because of falling sales, but, in "Losses" by William Messner-Loebs, Lee Moder and Ande Parks, Wonder Woman had to deal with the disappearance of Themyscira (the home of the Amazons and Diana's mother, Queen Hippolyta), as well as a clerical error that held back her Justice League stipend check, and finding it hard to live in the basement of Julia and Vanessa Kapetelises.

Along with having to get a job at Taco Whiz, a local fast food restaurant working for Hoppy Green, Diana finds a new apartment with Camille Sly, a landlord by fact of needed friends and income at her advanced age, and befriends, then saves customer Micah Rains from mobster Antonio Sazia. 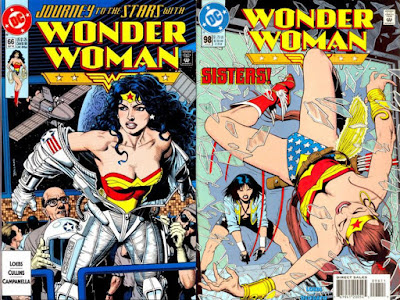 A quirky issue to say the least, and one reflective of the odd tone of the era of William Messner-Loebs, who also worked with artists Jill Thompson, Paris Cullins and Mike Deodato Jr. (and stunning covers by Brian Bolland) during his run from Wonder Woman #63 to #100 in the 1990s, working between the runs of George Perez and John Byrne. 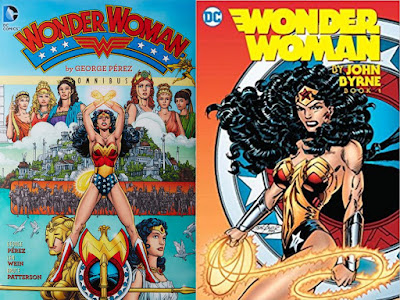 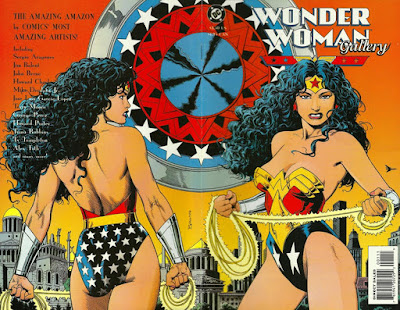 Posted by Dave's Not Here Comic Blog at 4:29 AM