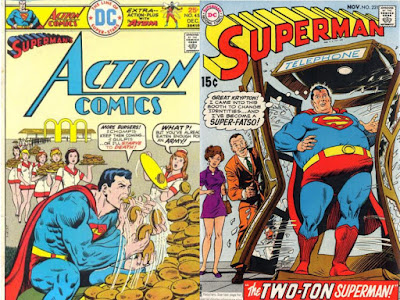 Well, even the Man of Steel seems to get hungry...and falls prey to bad eating habits, and a lack of action.

Those habits lead to problems, even for the last son of Krypton!

But, these two unrelated comics deal with a real Crisis for Superman! 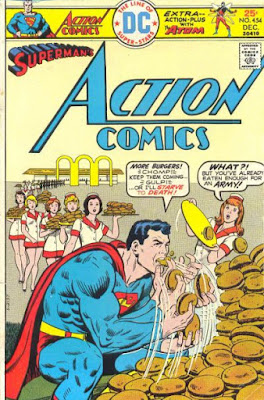 In Action Comics #454 (December, 1975), Superman found himself running out of power in "Superman's Energy Crisis" by Cary Bates, Curt Swan and Tex Blaisdell (under a cover by Bob Oksner).


Superman found himself at a loss of power while fighting the Toyman, and even more so, randomly drifting off to sleep during the day as Clark Kent.  Superman tried adding food to his diet to keep his energy levels up, including quite a burger binge at McTavish's, but it wasn't until falling into a trap of the Toyman's that took him into orbit where Superman found out that a unique combination of minerals were draining the solar energy from his body (which Superman was able to take care of). 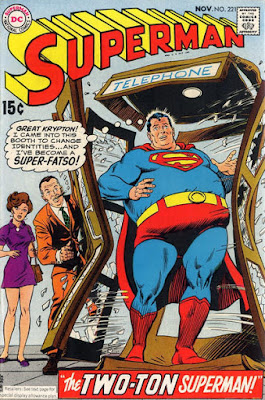 Superman showed the weight gain in Superman #221 (November, 1969) with the story of "The Two-Ton Superman" by Cary Bates, Curt Swan and George Roussos (under a cover by Curt Swan and Murphy Anderson).

It wasn't overeating that bloated Superman, but instead a helpful alien, who gave Superman a sacred scarlet nectar, which had turned poisonous due to its age, but instead of killing the Man of Steel, simply inflicting a weight gain upon Earth's hero.  Superman had to work super-hard to lose the weight, and quickly (not unlike the rest of us...).
Posted by Dave's Not Here Comic Blog at 4:14 AM