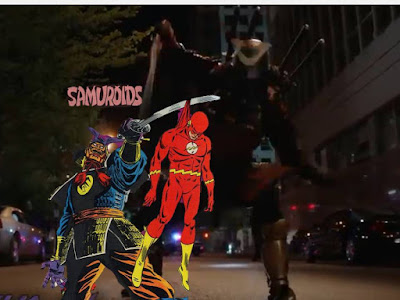 The Samuroids were mechanical foes that first faced the Flash (Central City's protector with the alter ego of police scientist, Barry Allen)...


...but were far from the simple foes they originally appeared to be. 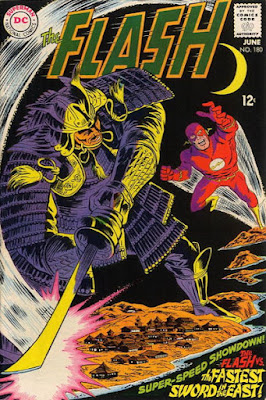 The Samuroids premiered in Flash #180 (June, 1968) by Frank Robbins, Ross Andru and Mike Esposito, under a cover by Andru and Esposito.

In this issue, Barry Allen and his wife, Iris, were vacationing in Japan, where Barry was warned by his friend, police Captain Hash, that war criminal, Baron Katana (who also premieres in this issue), was coming to attack Japan, with an army of Samuroids (robot samurais).

Barry goes to investigate the gathering at nearby Castle Heron as the Flash, while Iris keeps Barry's identity a secret from his friend Hash.

The Attack of The Samuroids 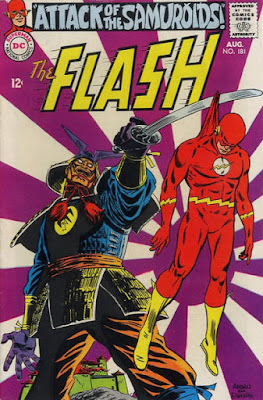 In the second issue, Flash #181 (August, 1968, by Frank Robbins, Ross Andru and Mike Esposito, with Andru and Esposito on the cover), Flash's battle continues.


The Samuroids take Flash captive, with Captain Hash and his movie director friend, Hideki Toshira, coming to Castle Heron pretending to film a movie, which allows Barry the distraction he needs to make a flashy escape.  Baron Katana sends the Samuroids to attack, while holding Iris hostage.  Flash uses his super-speed to save his wife, as well as turn off the machine which powers the Samuroids, which sends Baron Katana fleeing into the ocean in defeat.

Thus ends the threat of the Samuroids.... 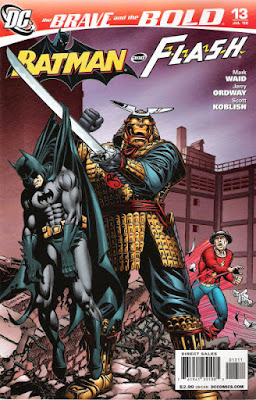 ...at least until Brave and the Bold #13 (July, 2008 by Mark Waid, Jerry Ordway, Scott Koblish and Bob McLeod, under a cover by Jerry Ordway), where Batman and Jay Garrick Flash face the reactivated androids and learn a little of their history.

The Samuroids were created by T. O. Morrow (a scientific villain who first faced Barry Allen Flash and Hal Jordan Green Lantern, as well as creating the android, Red Tornado).  The Samuroids ended up in a warehouse controlled by the Riddler, who gave it to the Penguin, who called in T. O. Morrow to help reactivate the Samuroids (who used coded bacteria to aid their android parts) to cause trouble in Gotham.  Batman and Jay Garrick worked together to stop the menace.
Posted by Dave's Not Here Comic Blog at 4:53 AM