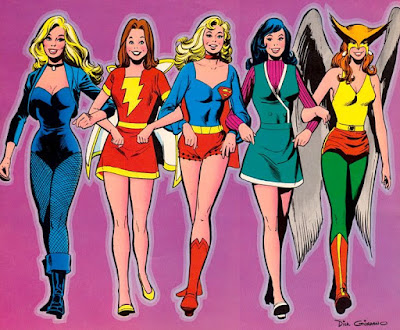 Since the 1976 Super DC Calendar featured this fantastic shot of the fabulous females of the DC Universe by Dick Giordano....

..seemed a good enough time to talk about who these five women are! 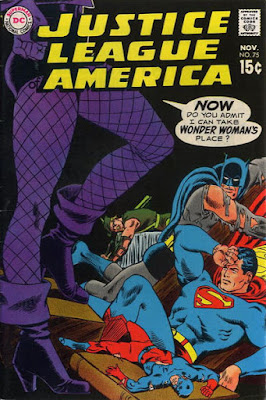 Dinah Laurel Lance premiered as Black Canary with what would eventually become her sonic scream to join the JLA in Justice League of America #75 (November, 1969 by Denny O'Neil, Dick Dillin and Joe Giella), but, at the time, she thought she was Dinah Drake Lance (the original Black Canary), and continued to believe that for years as she transitioned from being a member of the Earth-2 Justice Society to the Earth-1 Justice League.

The story of how the daughter thought she was the mother, and what happened to the original Black Canary was eventually revealed in Justice League of America #220 (November, 1983, by Roy Thomas, Chuck Patton, Romeo Tanghal and Pablo Marcos), which turned the issue where she joined the JLA into a Black Canary first appearance. 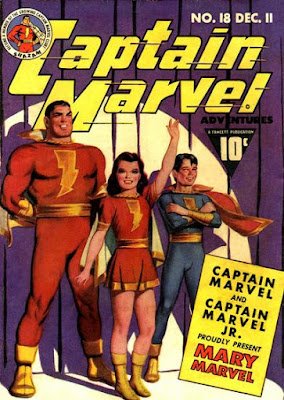 Mary Bromfield found out she was Billy Batson's twin sister in Captain Marvel Adventures #18 (December 11, 1942 by Otto Binder and Marc Swayze) thanks to them both possessing half of a locket, and Billy revealed that he could change into Captain Marvel by saying "Shazam".  Mary was a competitor in a trivia contest, covered by radio announcer, Billy Batson, and hoods tried to steal the prize of the show....with Billy and Freddy Freeman incapacitated by the hoods and unable to speak, Mary tried the magic word, and with a flash of magic lightning became Mary Marvel!  Mary then defeated the ruffians easily with her new powers. 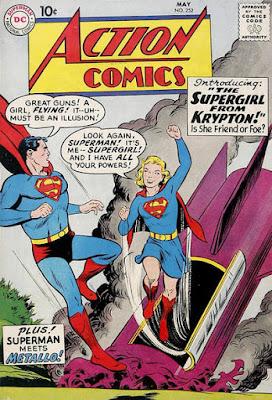 Kara Zor-El's rocket landed on Earth in Action Comics #252 (May, 1959 by Otto Binder and Al Plastino) in "The Supergirl From Krypton".  Superman found his cousin in her rocket, and helped her adjust to life on Earth, with a secret identity of Linda Lee at Midvale Orphanage for a time, while Kara operated in secret as Superman's secret weapon of Supergirl.


As time passed, Supergirl was adopted by Fred and Edna Danvers, faced a few of Superman's foes like Lex Luthor and friends like Batman and the Legion of Super-Heroes, then Superman revealed Supergirl's presence to the world in Action Comics #285 (February, 1962, by Jerry Siegel and Jim Mooney) as "The World's Greatest Heroine"...and best of all, these issues were all reprinted in giant sized issues of Action Comics. 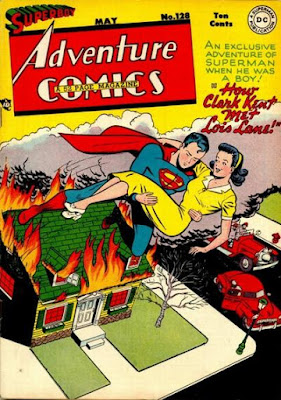 Lois Lane first met a young Clark Kent (Superboy) in Adventure Comics #128 (May, 1948 by Bill Finger and George Roussos) in "How Clark Kent Met Lois Lane" with Clark and Lois competing in a contest for the Daily Planet to get a story published, with Clark unintentionally giving the contest to Lois, as she got two stories on Superboy. 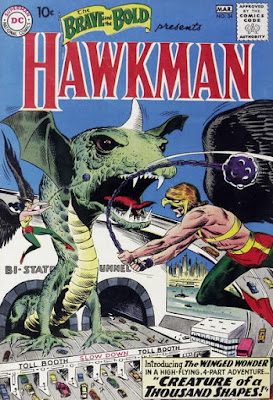 Shayera Hol came to Earth with her husband, Katar Hol in Brave and the Bold #34 (February-March, 1961 by Gardner Fox and Joe Kubert) as Thanagarian policemen, looking for the shape-shifting criminal, Byth Rok.  They used their advanced science and ancient Earth weaponry to capture the villain, but remained on Earth as museum curators in Midway City, as Carter and Shiera Hall, working with Commissioner George Emmett.

Over the years, the multiple Earths and various Crises weren't kind to the Hawk couple, as Hawkgirl (later Hawkwoman)  and her history got more complex.

Still, these were all wonderful heroines!
Posted by Dave's Not Here Comic Blog at 3:46 AM