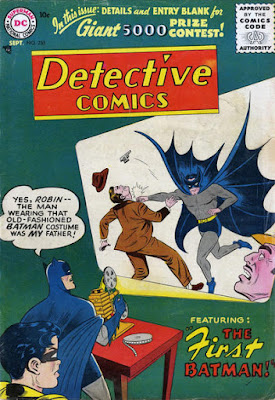 Think you know Batman?   That Bruce Wayne was the first Batman, taking his mission to avenge the death of his parents to Gotham?

No, there was another Batman before Bruce....his father, Thomas Wayne, as revealed in Detective Comics #235 (September, 1956), by Bill Finger, Sheldon Moldoff and Stan Kaye.

Bruce Wayne finds an old bat-costume in Wayne Manor, and researching it, finds his dad wore this costume at a party, stopping gangsters, testifying against the gang leader, Lew Moxon.  Thomas and Martha Wayne were then later killed by Joe Chill....but, evidence found in the here and now suggested Lew Moxon had hired Chill to kill Thomas.  This sent Batman after Moxon, who had no memory of hiring Chill.  Batman's costume was damaged, so he wore his dad's outfit, which jogged Moxon's memory, sending him fleeing into the street (while confirming his guilt), only to be accidentally struck by a car and killed, bringing to an end Bruce's hunt for his parents' killer (and giving the symbolic idea that Thomas was will him as he finished that hunt). 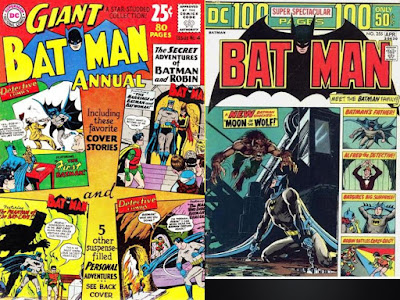 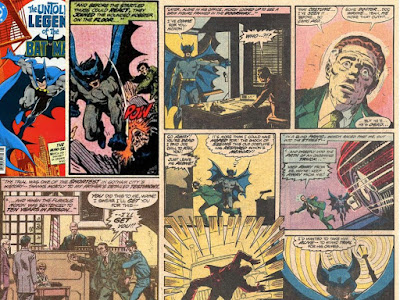 The story also got new life, in both the Untold Legend of the Batman mini-series (one of the best summaries of Batman's origins) and during a more recent run in Batman, under the heading of The Black Glove and R.I.P. (in the later 600s of Batman)......proving we can never really escape the legacy of our fathers, or the justice of Batman.
Posted by Dave's Not Here Comic Blog at 4:47 AM