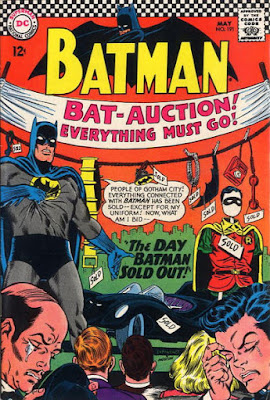 Well, even millionaire Bruce Wayne had to pay taxes, and sometimes you just owe too much....

The real story of "The Day Batman Sold Out" by John Broome, Sheldon Moldoff and Joe Giella, was that Batman's equipment was made radioactive by new villain, Ira Radon....and to save himself from that radiation, Batman had to sell off his stuff via the Wayne Foundation so he would not be exposed to it (it was small enough radiation dose that only Batman would be affected by it, as long as he maintained it all, and all together...).