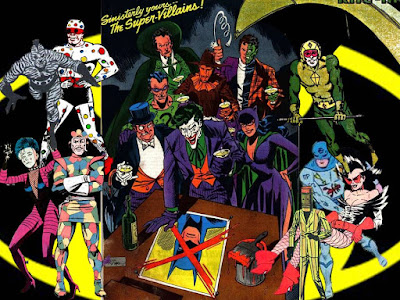 Sure, everyone knows the Batman villains like Joker, Catwoman, Penguin, Riddler....

....but, there are villains even more obscure to learn about! 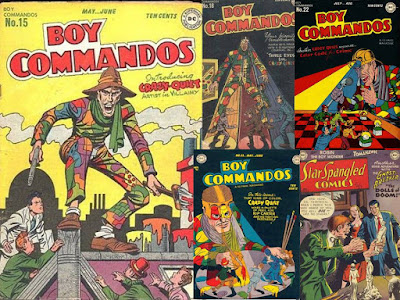 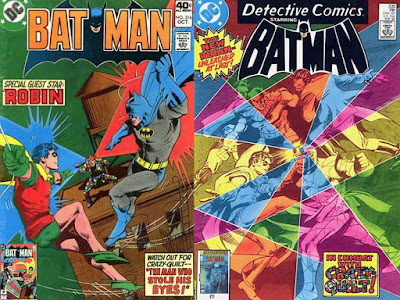 Of course, those are all technically appearances of the Earth-2 Crazy Quilt (with a Robin who grew up to join the Justice Society).  The Robin (Dick Grayson) who joined the Teen Titans first, first faced Crazy Quilt in Batman #316 (October, 1979 by Len Wein, Irv Novick and Frank McLaughlin), with a similar origin and having been put in jail by Robin before, and that Crazy Quilt returned a few times, in Batman #368 (February, 1984) and Detective Comics #535 (February, 1984) to face Robin (Jason Todd), part of a mass escape in Batman #400 (October, 1986), and popping up in crowd scenes (like in Underworld Unleashed #1 and JLA #34) before a new, female Crazy Quilt took over in during the Villains United mini-series. 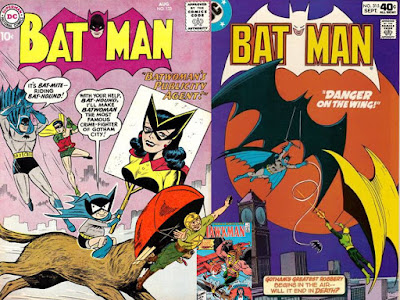 Chuck Brown had a childhood fascination with kites, and used gimmicked kites (as well as a hanglider like device) to face Batman and Robin as Kite-Man, starting with Batman #133 (August, 1960 by Bill Finger, Dick Sprang and Charles Paris).  Kite-Man returned to face Batman in Batman #315 (September, 1979 by Len Wein, Irv Novick and Frank McLaughlin), then faced Hawkman, Hawkgirl and Zatanna (revealing his real name, then crashing into a tree, in Hawkman #4 of November, 1986 by Tony Isabella, Richard Howell and Don Heck).  Kite-Man joins a group of super-villains in the Olympics representing the nation of Zandia in Young Justice #23 (September, 2000), remaining in Zandia for an attack by young super-heroes from events starting in Young Justice #48 (October, 2002, and lasting through #51), is thought to have been killed by Joker during the Infinite Crisis, and was killed (and eaten) by Intergang leader Bruno Mannheim in 52 #25 (December, 2006).  Good grief! 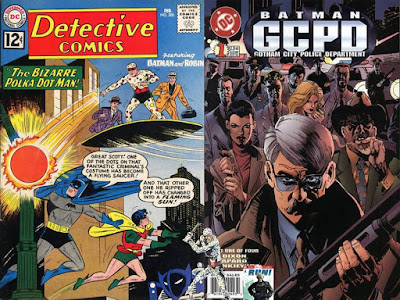 Batman and Robin first face Mr. Polka Dot in "The Bizarre Polka-Dot Man" in Detective Comics #300 (February, 1962 by Bill Finger, Sheldon Moldoff and Charles Paris), where the villain uses a polka dot motif to steal in Gotham.  Batgirl (Barbara Gordon) and Nightwing (Dick Grayson) take him down during a night on Gotham in the flashback tale of Nightwing #104 (Late April, 2004), is beaten by Harvey Bullock in Batman: G.C.P.D. #1 (August, 1996), before being a part of the Army of the Endangered during the Final Crisis Aftermath: Run mini-series of 2009, where he meets his death. 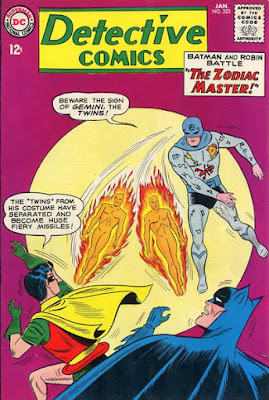 Zodiac Master first appeared in Detective Comics #323 (January, 1964 by Dave Wood, Sheldon Moldoff and Charles Paris), facing off against Batman and Robin using foretelling the future and Zodiac based weapons against the Dynamic Duo.

This was it for the Zodiac Master....


....having no known relation to other Zodiac based villains, such as Doctor Zodiac or Madame Zodiac (who faced Superman, Batman and Batgirl over their careers.....). 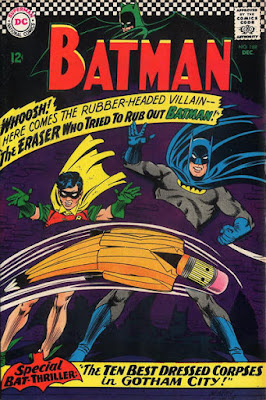 Another villain with a short run career was the Eraser, who premiered in Batman #188 (December, 1966 by John Broome, Sheldon Moldoff and Joe Giella).  Commissioner Gordon calls in Batman to solve a crime where all the clues have been erased, and that leads Batman to the Eraser, who works for criminals to erase clues to their crimes.


Batman disguises himself as a criminal to hire the Eraser, who recognizes Bruce Wayne, and captures him (as the Eraser is Bruce's old school chum of Lenny Fiasco).  This forces Robin into action to distract the Eraser, as Bruce escapes the Eraser's trap, changes into Batman, and rubs out the Eraser's freedom. 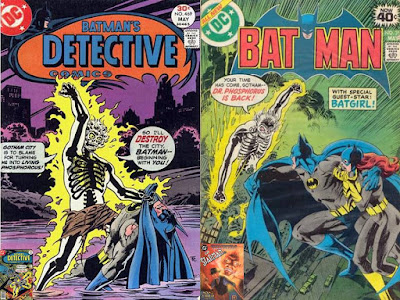 Alex Sartorius was a scientist, working at a nuclear facility when it all when wrong, changing him into a man whose skin would combust in the air, unhinging the doctor, who planned to take revenge on Gotham City as Dr. Phosphorus (starting with Detective Comics #469 of May, 1977 by Steve Englehart, Walt Simonson and Al Milgrom), being stopped by Batman in Detective Comics #470 (June, 1977), returning to face Batman and Batgirl in Batman #311 (May, 1979), wounding the original Hawkman in the Crisis On Infinite Earths, popping up in Black Orchid #2 in 1989, becoming a foe for the original Starman, Ted Knight, after giving his soul to Neron in Underworld Unleashed #1 (November, 1995), and sparring with Ted Knight in Starman #13 (November, 1995), being their for Ted's final battle in Starman #63 to #71 in 2000, returning to face Batman again (starting with Detective Comics #825), as well as Batgirl, Stephanie Brown (in Batgirl #6 and #7 of 2010). 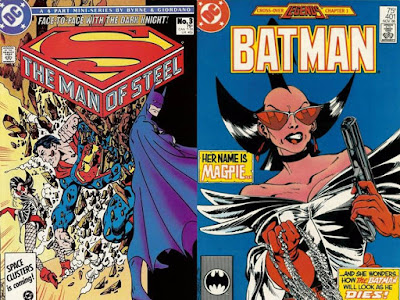 Margaret Pye was a jewel thief, fascinated by shiny things, so going by the name Magpie, as she faced off against Superman and Batman in one of their first meetings in Man of Steel #3 (November, 1986 by John Byrne and Dick Giordano).

Magpie returned to face Batman and Robin (Jason Todd) as unrest grew towards super-heroes (even the ones in Gotham) in Batman #401 (November, 1986).  Magpie didn't take advantage of Neron's offer in Underworld Unleashed #1, ending up in Arkham Asylum, and dying in Batman #651 (May, 2006). 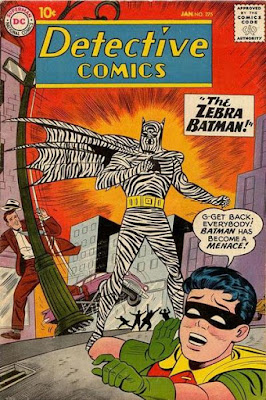 ...and was defeated by Batman when the Caped Crusader stole the villain's powers magnetic powers, and used them against the villain! 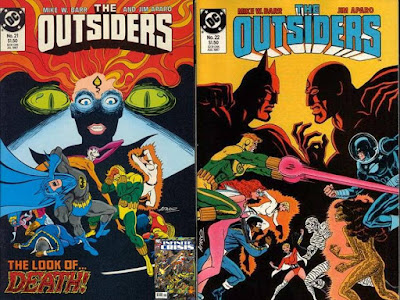 Inspired by this villain (and others Batman faced around this time like Clayface and Planet-Master), Kobra created Strike Force Kobra, with his own Zebra Man (with a mohawk, as it was the 1980s) to use his magnetic powers against Batman and his team of super-heroes, the Outsiders, starting in Outsiders #21 (July, 1987 by Mike W. Barr and Jim Aparo), being defeated in Outsiders #22 (August, 1987), and waiting all the way until Infinite Crisis #7 (June, 2006) to appear again! 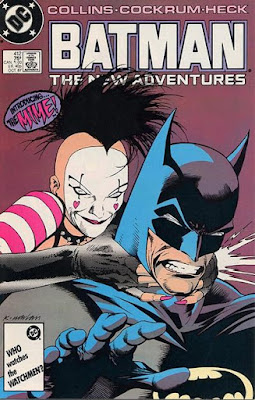 Camilla Cameo was the daughter of mob boss Oscar Ortin, also known as the Fireworks King, who made a lot of noise when he committed crimes.


The lady who would become Mime took to a more artistic life, first ballet, then mime, all while trying to live a quiet life.  That life wasn't too successful, so, the Mime took to crime, using a gun (with a silencer), to commit crimes (and keep the noise down).  This caught the attention of Batman and Robin (Jason Todd), who stopped her while she was attempting to silence a rock and roll concert (with the feedback of sound deafening the girl), all in Batman #412 (October, 1987, by Max Allan Collins, Dave Cockrum and Don Heck). Grace Balin was a marine biologist at Gotham Aquarium, turned into a whale like creature called Orca in Batman #579 (July, 2000 by Larry Hama, Scott McDaniel and Karl Story), trying to steal a diamond, but being defeated by Batman over the next few issues in Batman #581 (September, 2000).  Orca returned, being infected with the Joker virus in Joker: Last Laugh #2 (December, 2001), in a flashback in Batman #652 (June, 2006), before going belly up in Detective Comics #819 (July, 2006), being killed by the Tally Man. 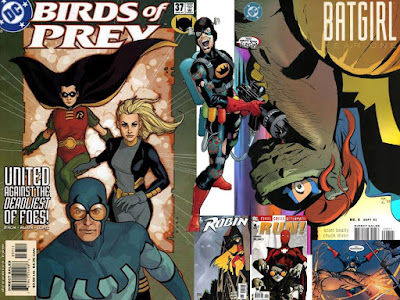 Relishing his condiments, Mitchell Mayo turned to crime, but really wasn't all that good at it as the Condiment King.  Premiering on the Batman: Animated Series, the Condiment King first appeared in the comics in Birds Of Prey #37 (January, 2002 by Chuck Dixon, Marcos Martin and Alvaro Lopez), being captured by Blue Beetle (Ted Kord), Robin (Tim Drake) and Black Canary, who prevent him from setting off a mustard gas bomb (being a little more dangerous than when he faced the original Batgirl and Robin, in a tale told in Batgirl: Year One #8 of September, 2003).  CK returned in Robin #171 (April, 2008), then was rubbed out as a part of the Army of the Endangered in Final Crisis Aftermath: Run #4 (October, 2009). 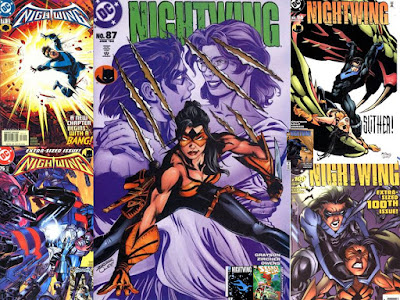 Catalina Flores was an FBI agent living in Bludhaven, near Dick Grayson's (as well as the All-Star Squadron's Tarantula, Jonathan Law), with her first appearance in Nightwing #71 (September, 2002, by Devin Grayson, Rick Leonardi and Jesse Delperdang).  Catalina admired Tarantula, taking on the identity to fight the crooked cops of the city in Nightwing #75 (January, 2003).  Tarantula is a bit brutal in her enforcement of the law, but she has reason to be, as John Law (along with many other residents of Dick Grayson's apartment building) are killed by Blockbuster in Nightwing #89 (March, 2004), leading Tarantula to kill Blockbuster in Nightwing #93 (July, 2004), with Nightwing failing to act to stop her.  Nightwing goes on the run with Blockbuster for a time, turning her in in Nightwing #100 (February, 2005).  Appearing next defending Bludhaven from OMACs in Robin #143 (December, 2005), she becomes one of many villains looking for redemption in Secret Six #1 to #6 (2008/2009), stealing a "get out of hell free" card from Neron, but sacrificing herself to stop Junior (the sister of the Secret Six's Rag Doll). 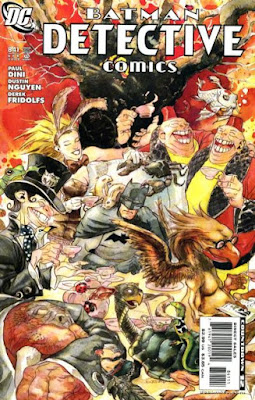 Harriet Pratt was an escort and a grifter who was recruited by the Mad Hatter to be a part of his Wonderland gang, as March Harriet, in Detective Comics #841 (April, 2008 by Paul Dini, Dustin Nguyen and Derek Fridolfs)...

....along with Tweedledee and Tweedledum (who had been Batman villains prior to this as well, as had the Mad Hatter), and newer villains like the Lion, the Unicorn, the Walrus and the Carpenter. 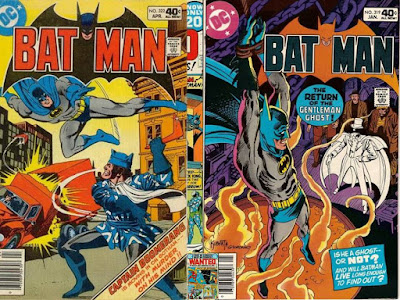 All these villains were lucky enough to have faced Batman or members of his family, so have the likelihood of a longer life in medium outside of comics, but one would hope other heroes' villains can get some love as well (as have villains who have faced Batman, like Flash's Captain Boomerang and Hawkman's Gentleman Ghost, or Green Arrow villains like the Clock King).  After all, at one point, even Deadshot, Scarecrow and Poison Ivy were barely used villains.
Posted by Dave's Not Here Comic Blog at 4:00 AM