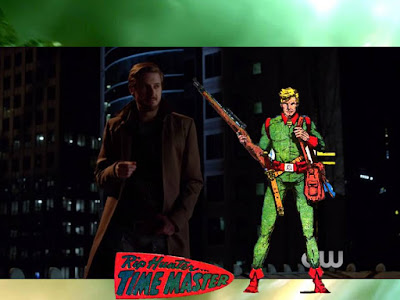 Rip Hunter was a character introduced back in Showcase at DC Comics, and he considered himself a time master, traveling to various times with his crew to explore historical mysteries....

...a little different than the character found on DC's Legends of Tomorrow....

....yet maybe not so different, as you will see from these tales from Rip Hunter's comic book past. 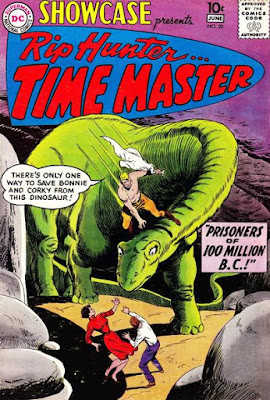 The first tale of Rip Hunter, from Showcase #20 (May-June, 1959) by Jack Miller and Ruben Moreira, sees Rip assemble his team, with lab assistant Jeff Smith, his friend Bonnie Baxter and her brother, Corky Baxter.  Rip had built two time spheres, and took off in one of them with Jeff, to check out the dinosaurs.  Criminals Hoyt and Keegan break into Rip's lab, and force Bonnie and Corky to take the other Time Sphere out for a spin, ending up at the same time, but damaging their Time Sphere.  The crooks go searching for and finding Rip's sphere and hide it, but get swept away in a roaring river.  Rip and Jeff are reunited with the Baxters, and look for the hidden Time Sphere, finding it, and Rip sends Bonnie and Corky back to their home time (while taking extra parts with him as well).  Finding the criminals and braving this prehistoric world, the four men get back to the broken Time Sphere, with Rip fixing it to enable them to return home.  The first recorded time travel of Rip Hunter....and already he seems to bring more trouble with him!

The Criminal League Of Time 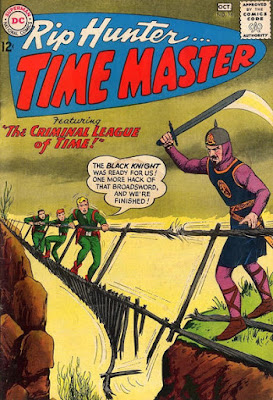 Rip and his crew get green uniforms in Rip Hunter, Time Master #16 (September-October, 1963 by Jack Miller and John William Ely), but seem to still get into trouble with criminals.  Lars Kreel kidnaps Corky, forcing the boy to take him to Harry Hawkins, a famous rogue highwayman.  Rip, Jeff and Bonnie follow in their second Time Sphere, but Lars, Harry and Corky have already taken off to another time period by the time Rip's team arrived.  Rip and his crew follow, finding the criminals attempting to recruit the Black Knight, with Rip dueling the rogue in place of Count de Grammond.  After the battle, Rip follows the Black Knight to Kreel and Hawkins, and one of the Time Spheres is destroyed.  Everyone races back to the other, that has Bonnie guarding it, and the villains are defeated, being returned to their correct times.

Seems alliances over time don't work well for the villains, do they? 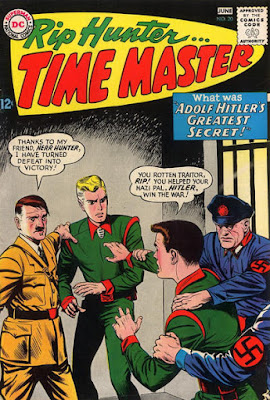 One of the greatest fears of time travel is it falling into the wrong hands, and, while going back to get footage of World War II, the Time Sphere is shot down on the eastern front, with the team being captured by the Nazis (all related in Rip Hunter, Time Master #20 of May-June, 1964 by Jack Miller and John William Ely).  Adolf Hitler forces Rip to retrieve Napoleon to help in his battle with the Russians, and Rip must comply or Hitler will kill Jeff.  Rip saves Napoleon from the Prussians, and returns with the leader to Hitler.  Rip and Napoleon take charge of the German army, but lead them into a trap over a frozen lake, then return to Hitler's headquarters to free Jeff, and in doing so, leave this time, and Hitler, to his fate.


Sometimes enemies seem to control Rip, but sometimes, Rip can control them, and usually has a plan. 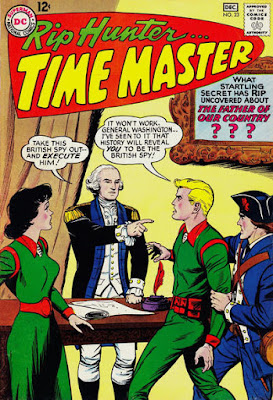 Documents are discovered that prove that George Washington was a traitor, working against the colonies during the Revolutionary War for the British in Rip Hunter, Time Master #23 (November-December, 1964, by Jack Miller and John William Ely).  As author Brad Meltzer and his Decoded team weren't yet available, the United States sends Rip back in time to explore these new historical facts...with Rip confronting Washington, who doesn't deny the charges, and tries to capture Rip and his crew, who escape and return to their home time, with the father of their country now known as a traitor.  Rip and his crew go back to the incident in question, finding George Washington conspiring with General Cornwallis of the British Army to steal continental money.  Things look grim, until Rip inspects the money on the ship, finding it to be counterfeit.  This was part of a plan of Washington's to lure the British away from Chesapeake Bay, which Rip's interference has now threatened, but Rip disguises himself as Cornwallis, leading the British Army away, then returning to his own time, knowing Washington wasn't a traitor. 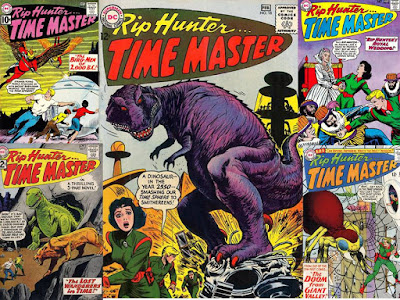 A few tales from the early days of Rip Hunter, and more information on Rip Hunter and his 1980s teammates of the Forgotten Heroes can be found here....

...as well as information on where to find the few reprints of Rip Hunter's original tales can be found here. 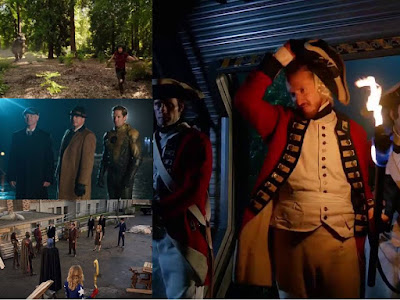 With 4 issues of Showcase and 29 issues of his own title, seems to me, with the popularity of the CW's time traveling series, the Legends of Tomorrow (featuring Rip Hunter in tales related to tales in the comics), it is time to see all of these legendary tales collected in Omnibus form (including the ones above, as the TV Show has encountered dinosaurs, seen villains unite, gone to World War II and even met George Washington).
Posted by Dave's Not Here Comic Blog at 4:00 AM