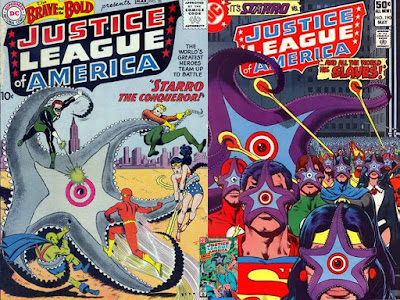 Starro was the first foe that readers saw the Justice League of America face, in their premiere in Brave and the Bold #28 (February-March, 1960) by Gardner Fox, Mike Sekowsky, Bernard Sachs, Joe Giella and Murphy Anderson.


So, this is our chance to have Starro in our face....but, the safe way, not the way it was in the comics! 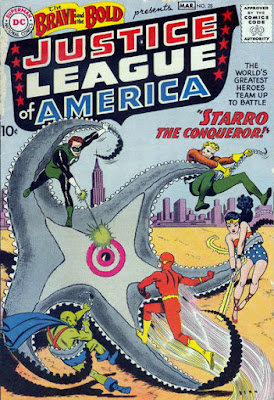 Brave and the Bold #28 (February-March, 1960) by Gardner Fox, Mike Sekowsky, Bernard Sachs, Joe Giella and Murphy Anderson premiered the alien invader Starro, as he faced off against the Justice League of America (though this wasn't their origin, that would be explained later).  Aquaman gets warned of the menace of the invading starfish, Starro, by his own finny friends, and he sends out the call to the JLA, with Flash as chairman, sending out the team to take on the 3 duplicates of Starro, with Green Lantern facing one, Wonder Woman and Martian Manhunter taking on the second, while Flash goes to Happy Harbor and meets the oddly immune Snapper Carr (whose help on this case leads him to become the Justice League biographer and honorary member), while Aquaman finds the original  (who the team defeats with lime, thanks to Snapper). 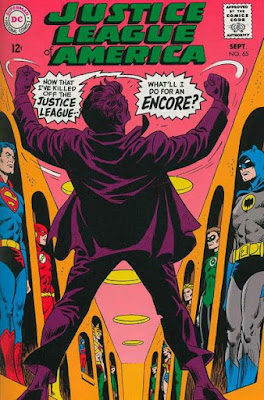 Starro's next appearance is just a small one, in Justice League of America #65 (September, 1968) by Gardner Fox, Dick Dillin and Sid Greene, where Starro, along with past JLA foes Amazo, Super-Duper, the Crystal Creature from Appellax, and Dr. Light face the team at the behest of T. O. Morrow...


...who had hatched a plan to kill the Justice Society of America the issue previous, creating the android Red Tornado (but Reddy was a good guy and a little more than just an android, so he helps undo Morrow's plan, and saves the JLA as well), in the last story of the Justice League of America written by Gardner Fox.

The Secret Of The Sinister Abyss 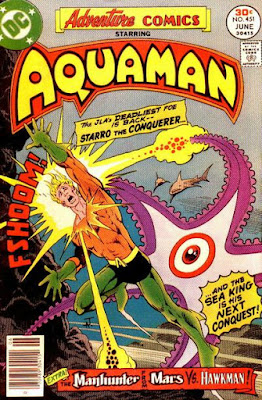 Aquaman faces Starro alone in Adventure Comics #451 (May-June, 1977) by David Michelinie, Jim Aparo and Liz Berube.  The secret is out, as Starro appears on the cover, but that doesn't stop the alien starfish from being a menace to Aquaman right at the worst time, while he was looking for his octopus friend, Topo, who had taken his son, Aquababy.  This Starro regenerated from a piece of the original Starro, growing strong in the polluted part of the ocean he was in, giving Aquaman the opportunity to summon fish to bring fresh water to the area, which stunned Starro, allowing Aquaman to defeat the creature (and have Green Lantern take the alien away)...

...so Arthur could continue his quest for his son in the next issue without alien interference.

The Return Of The Starfish Conqueror 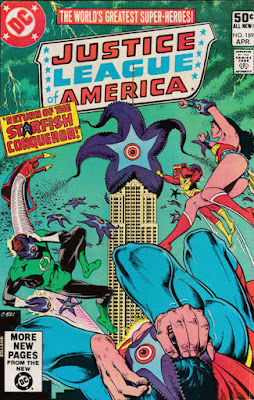 When Starro returned in Justice League of America #189 (April, 1981 cover by Brian Bolland) by Len Wein, Gerry Conway, Rich Buckler and Frank McLaughlin, he was much more in your face (literally!).  Having been found by young Terry Watson following his encounter by Aquaman, the boy was possessed by the alien starfish, who then took his family as well, having them move him to a Central Park lake.  There, Starro accidentally encounters Wonder Woman and Red Tornado, who summon JLAers Black Canary, Firestorm, Green Lantern and Superman to face the alien.  Starro has a new trick this time, creating duplicates of himself which attach to the face of his foes, and dominate their minds.  By the end of this issue, Starro has conquered the JLA, and the island of Manhattan.... 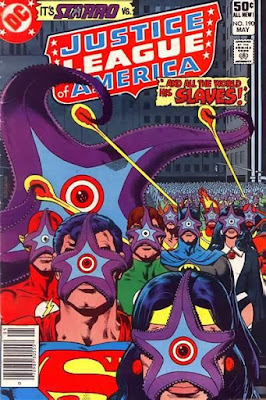 ...with the other JLAers finding out that "Our Friends, Our Enemies" in Justice League of America #190 (May, 1981) under a cover by Brian Bolland, with story by Len Wein, Gerry Conway, Rich Buckler, Bob Smith and Larry Mahlstedt.  The rest of the Justice League (including Batman, Flash, Aquaman, Hawkman, Elongated Man, Hawkgirl and Zatanna) are called in to deal with the problem, staying safe from Starro by using repellor-discs Hawkman supplied.

Still, Starro could have won if not for the robotic Red Tornado and young Terry Watson (who got free in a freezer), which Hawkman and Hawkgirl discovered, allowing the JLA to use extreme cold to defeat the alien starfish. 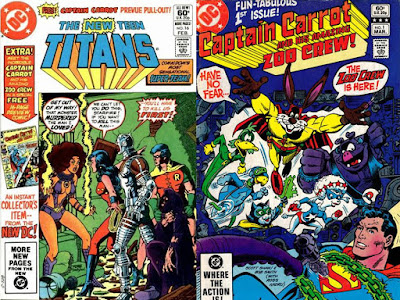 A menace to Earth-C (a new Earth Superman found while people on Earth-1 were starting to act like apes a special insert in New Teen Titans #16 of February, 1982 by Roy Thomas, Gerry Conway, Scott Shaw, Ross Andru and Bob Smith), leading to the creation of Captain Carrot (and other super powered "funny animals" that would be called the Zoo Crew.  This led into Captain Carrot and His Amazing Zoo Crew #1 (March, 1982), where Superman and his new animal allies found out that Starro was the menace behind this all! 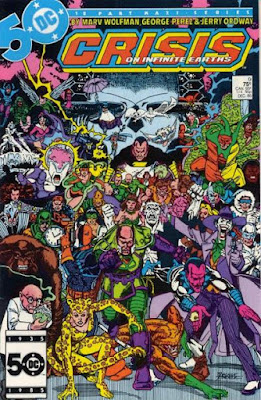 Starro was one of many villains to take part in the attack on the heroes in Crisis On Infinite Earths #9 (December, 1985) by Marv Wolfman, George Perez and Jerry Ordway, but Starro was just one of many villains gathered by Brainiac on his satellite, with the Conqueror not even using his abilities to take over people...and gets a punch in the eye by Superman for all his trouble...


...though Starro seems to have gotten over his cold allergy, as he seems to have no problem with the villains plan to freeze Earth-S, the home of the Marvel Family,  in this issue (or perhaps it was the cold that weakened the giant Starfish so Superman could defeat him alone). 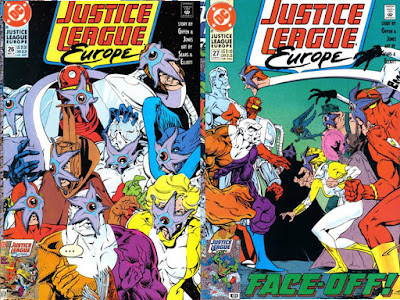 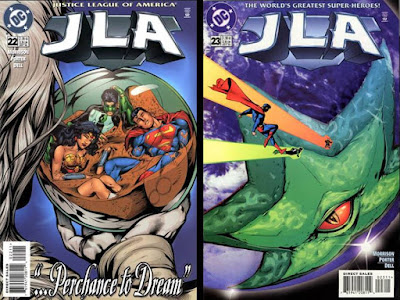 A slightly different version of Starro faces the Justice League (of Superman, Batman, Aquaman, Martian Manhunter, Flash/Wally West, Green Lantern/Kyle Rayner, Zauriel, Wonder Woman/Hippolyta in JLA #22 (September, 1998) and JLA #23 (October, 1998) by Grant Morrison, Howard Porter and John Dell, which was only defeated by the lord of dreams, Daniel, who was helping a boy named Michael Haney (though this Starro was called "It", "it" was a conqueror, and "it"s coming was foretold in JLA Secret Files #1 (September, 1997). 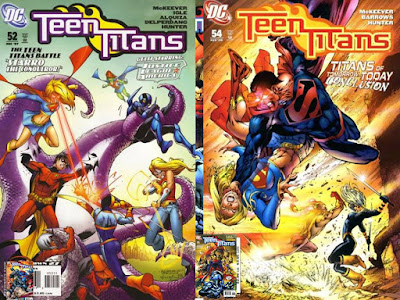 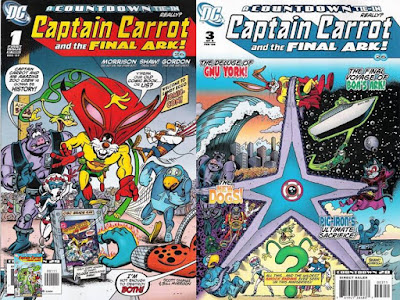 A more classic Starro returns for the 3 issue Captain Carrot and the Final Ark (December, 2007 to February, 2008 by Bill Morrison, Scott Shaw, Al Gordon, Phil Winslade and Scott Koblish), where the Zoo Crew defeat Starro but at a dire cost to them.... 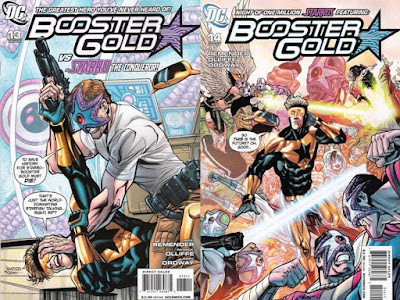 Starro ends up on time traveller Rip Hunter in Booster Gold #13 (December, 2008) by Rick Remender, Pat Olliffe and Jerry Ordway, where after a fight with Booster Gold and his sister, Goldstar, ends up on Chronos and Lady Chronos, with Booster ending up in a vat of Starros.  Escaping in Booster Gold #14 (January, 2009) by Remender, Olliffe and Ordway, Booster frees Lady Chronos, and the pair go to stop Rip from being infected, and find Chronos having stopped it even earlier, stopping Starro, but causing timestream anomolies... 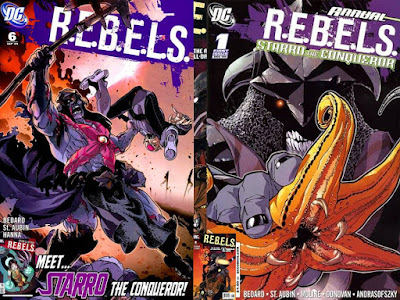 Starro underwent his biggest transformation starting in R.E.B.E.L.S. #5 (August, 2009) by Tony Bedard, Claude St. Aubin and Scott Hanna, confronting Vril Dox and his outer space police force (who add Captain Comet, Adam Strange and Kanjar Ro for help), with forces of his own, the High Vanguard, through R.E.B.E.L.S. #9 (December, 2009), with the Conqueror's full origin in R.E.B.E.L.S. Annual #1 of 2009. 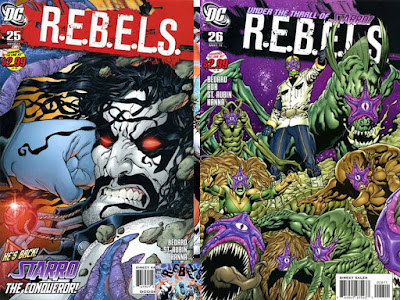 All in all, that's a lot of face time with Starro!