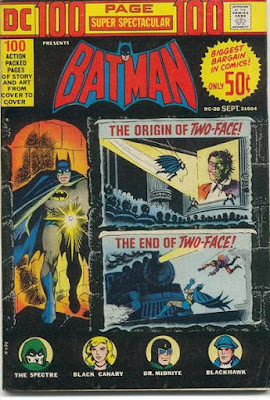 For the second of February, it seems appropriate to shine the light at the Batman foe, Two-Face....

....with a collection of his earliest appearances (as well as a couple of extras) from 100-Page Super Spectacular #DC-20 from September, 1973, all under a cover by Nick Cardy. 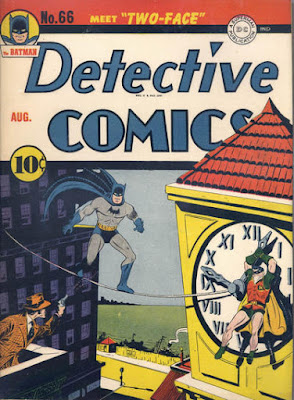 Detective Comics #66 (August, 1942) by Bill Finger, Bob Kane and Jerry Robinson, is the origin of Two-Face, where the dynamic duo first meet up with Harvey Kent (that was his original last name) when they face "The Crimes Of Two-Face".

This is when we see District Attorney Harvey Kent take acid to the face as he was prosecuting Boss Maroni, scarring half his face, making Kent use Maroni's two-headed coin (with one side now scarred as well) to make decisions, with the clean side representing good, and the scarred, evil.  Batman feels it is his responsibility to catch and rehabilitate Two-Face, but Two-Face is undecided, with his coin landing on its edge when he was deciding whether to be a hero or villain. 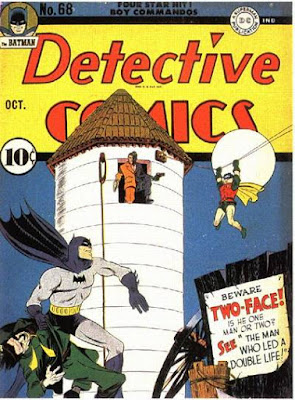 In "The Man Who Led A Double Life" from Detective Comics #68 (October, 1942) by Finger, Kane and Robinson, we get a follow up to the original tale, with Batman following up on his promise, as well as Harvey making a decision.

Putting the coin in his pocket, it is the coin that saves Two-Face when a cop shoots him in an attempt to stop the ex-attorney, making Two-Face lean to evil.  Two-Face begins crimes focused on the number two, and tries unsuccessfully to reconcile with his fiancee, Gilda, hiding half his face with help from a make-up artist (which eventually fails, leading Two-Face into a vendetta with the artist, and the artist's son to want revenge on Two-Face).  Batman stops this series of events. 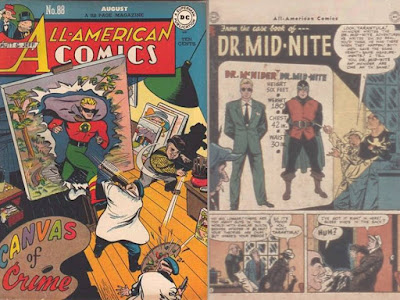 JSAer, Dr. Mid-Nite faces a villain called the Tarantula in this reprint from All-American Comics #88 (August, 1947) by John Broome and Alex Toth, with the Tarantula thinking he has figured out Dr. Mid-Nite's secret identity of Dr. Charles McNider. 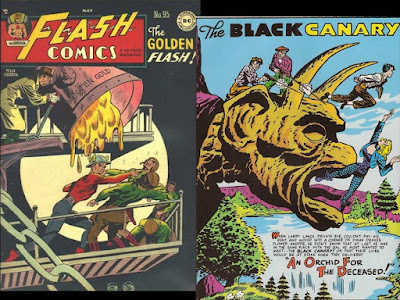 Dinah Drake gets an order at her flower shop...from the Black Canary (her alter ego) in Flash Comics #95 (May, 1948) by Robert Kanigher, Carmine Infantino and Joe Giella in "An Orchid For The Deceased.

Investigating as Black Canary, she ends up at the home of Andrew Masters, who has been murdered...and Black Canary has been framed!  Turns out Masters' niece committed the crime and the frame, because Masters changed his will to leave his money to Black Canary. 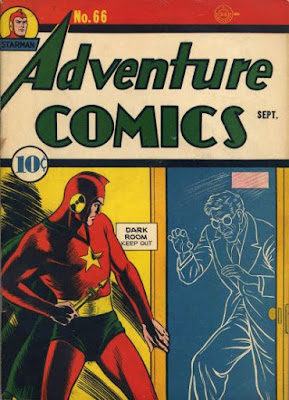 Starman is next up, with his tale of "The Case Of The Camera Curse" from Adventure Comics #66 (September, 1941) by Gardner Fox and Jack Burnley.


Starman (Ted Knight) faces off against Cuthbert Cain, who uses a special camera powered by voodoo magic to steal men's souls, who takes a picture of FBI agent, Woodley Allen, to keep him from interfering with Cain's plans.


Starman turns the tables on Cain using his own Gravity Rod, using Cain's camera on him, making Cain disappear and breaking Cain's hold on Allen.... 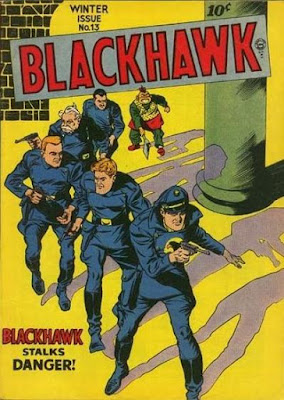 Blackhawk and his fellow aviators face off against femme fatale Fear for the second time in Blackhawk #13 (Winter, 1946) with art by Bill Ward.

The lady Fear gets help from Starra, who has managed to control a small European country by marrying it's prince, Ghor, to face off against Blackhawk and his men, but it doesn't end well for Starra, being killed by Fear as Starra was not able to manipulate Fear as well as she did her husband.


Fear also realizes how strong her feeling are for Blackhawk... 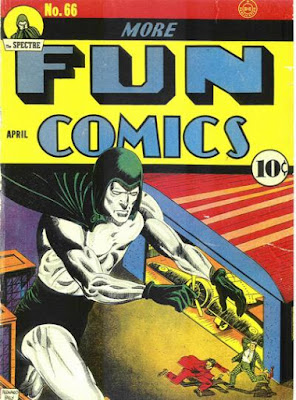 Spectre is called on to fight evil once more in More Fun Comics #66 (April, 1941) by Jerry Siegel and Bernard Baily.


This time, Spectre has to stop giant creatures who are menacing his home of Cliffland, but he is surprisingly weakened by their green eyes.  Spectre follows the creatures to a museum, where he learns their secret...that they live within the paintings!


After destroying the painting that housed the monsters, the Spectre saves his girlfriend, Clarice Winston, from criminals who were menacing her. 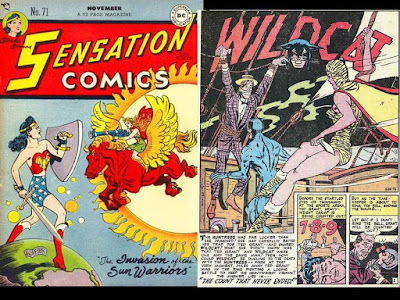 Fighter Wildcat (Ted Grant) shows up next, with "The Count That Never Ended from Sensation Comics #71 (November, 1947) by Robert Kanigher and Gil Kane.

This story features a battle between Wildcat and his foe, the Huntress, as she tries to hurt Ted by kidnapping Wildcat's assistant, Stretch Skinner, so that Ted will have to miss a championship fight.

Wildcat is able to free Stretch from the Huntress, then take out the imposter Huntress had replacing Ted Grant in the ring. 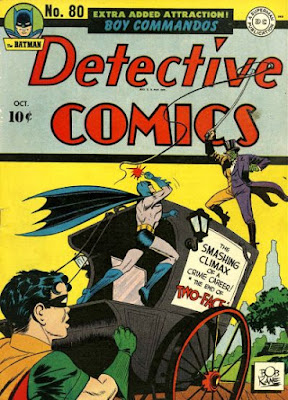 Harvey escapes prison to go on a criminal rampage, but accidentally shoots his fiancee, Gilda, during his spree.

This causes Harvey to want to reform, helping Batman defeat his gang, and Batman gets a doctor to perform plastic surgery on Two-Face, theoretically ending the menace of Two-Face forever (or at least until Batman #50 of 1948, but that's another tale...).

Posted by Dave's Not Here Comic Blog at 2:22 AM