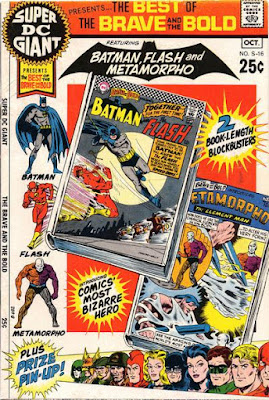 To be fair, this issue was labeled, "The Best of the Brave and the Bold"....


Still, it was two pretty interesting issues, with an edge and bottom of the cover by Murphy Anderson, two classic comic covers by Carmine Infantino and Ramona Fradon, and some additional material to make it worth a look back at! 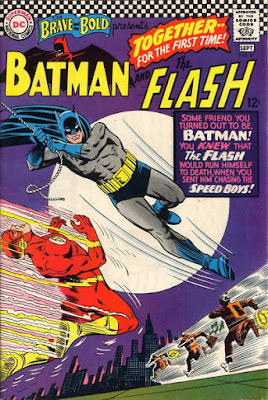 "The Death Of The Flash" was featured originally in Brave and the Bold #67 (August-September, 1966) by Bob Haney, Carmine Infantino and Charles Paris, and has Batman and the Flash facing off against "the Speed Boys", a gang of crooks working through Gotham with sneakers that give them super-speed.  This gang helped run the Flash to his death (as he had a heretofore unknown condition that was killing him as he used his speed), forcing Batman to work alone to stop them (though, thankfully, the radiation of the sneakers was enough to revive the Flash, cure him of his condition and allow him to stop his foes). 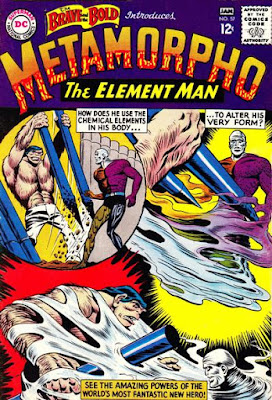 Why not reprint Brave and the Bold #57 (December-January, 1964/1965) in a B&B team-up collection?  Well, it had a solo story, "The Origin of Metamorpho" by Bob Haney, Ramona Fradon and Charles Paris....which introduced readers to archeologist Rex Mason, who, while agreeing to dig in a forbidden Egyptian temple (to get millionaire Simon Stagg to allow Rex cash, which Rex would use to date Simon's daughter, Sapphire), was knocked unconscious by Simon's caveman Friday, Java, and left for dead in a room with the Orb of Ra.  The Orb changed Rex into Metamorpho, who could control the elements of his body (and leading to another solo appearance in the next issue, then 17 solo issues of his own in the 1960s).

A Metamorpho: Silver Age collection featuring his two solo B&Bs, a team up with the Metal Men, a team-up with Batman and the first 8 issues of regular series would be welcome (or perhaps a Metamorpho: Omnibus, having all 17 of Metamorpho's issues, as well as the B&Bs, including a few later ones, and maybe including his Action Comics and World's Finest Comics back-ups, as well as 1st Issue Special one-shot and Superman team-up from DC Comics Presents), would also not be unwelcome (and would cover most of his appearances before joining Batman's Outsiders). 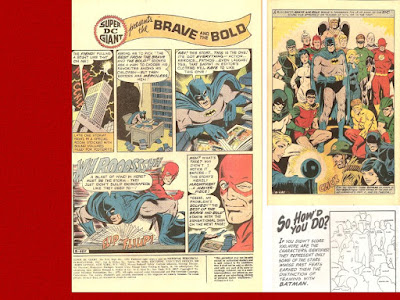 There were a few additional pages with Batman and Flash, leading into the reprints, and, best of all, a drawing by Dick Dillin, featuring the characters who had been featured in team-ups in B&B up to that point...

...but, that drawing was missing a few folks, like Speedy of the Teen Titans (colored in Green Arrow's original costume colors), as well as having Starman and Black Canary (with Black Canary only recently meeting Batman in B&B), as well as Supergirl (who only worked with Wonder Woman, in B&B #63 at the time...and Wonder Woman was there, but in her Diana Prince look (as Diana had a few team-ups with Batman), also missing Batgirl, who worked with Wonder Woman and Batman in B&B #78 against Copperhead).  Still, it is a great little drawing....