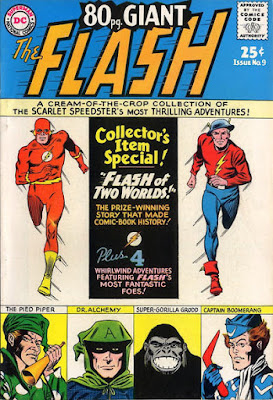 
...as well as the fantastic first appearances of Pied Piper, Dr. Alchemy and Captain Boomerang, as well as the end of the first trilogy of Flash's epic opening battle with Gorilla Grodd!

All this Silver Age goodness under a cover by Carmine Infantino and Murphy Anderson to dig into, so let's get to it fast! 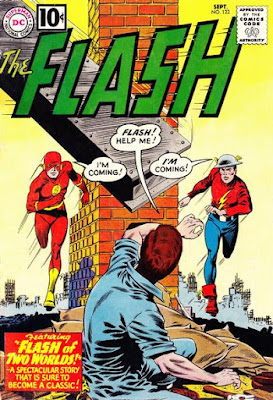 "Flash of Two Worlds" from Flash #123 (September, 1961) by Gardner Fox, Carmine Infantino and Joe Giella is the first tale up....and it's a doozy, as well as being the foundation of the DC Multiverse!   Barry Allen is helping at a Central City community center when he vanishes while performing a trick to impress the kids there.  Barry ends up on a parallel world, where Jay Garrick had been the Flash for years (though not since Flash Comics #104 of February, 1949....our time, at least, which Barry knows thanks to Flash Comics he has read since he was a kid).  Barry tracks down Jay in Keystone City, they swap origin stories, readers learn Jay married longtime girlfriend, Joan, before this story, and the two heroes face off against Jay's old foes of the Thinker, the Fiddler and the Shade....with Jay being convinced to permanently come out of retirement, and helps Barry get home. 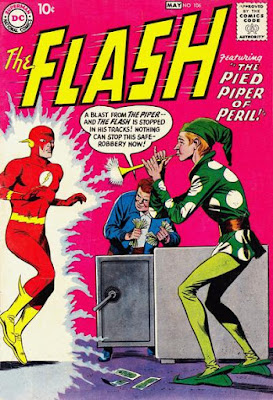 Next up is "The Pied Piper Of Peril" from Flash #106 (April-May, 1959) by John Broome, Carmine Infantino and Joe Giella, which introduces readers to Flash's foe for the first time.

Robberies are happening all over Central City, and Pied Piper is responsible, using his special flute to control criminals....yet nothing is being stolen.

Barry has to work fast to defeat the noisy villain, and, does so after a few fast tries!

More facts on the Pied Piper are here.

This issue is also important, as it reveals that reporter Iris West is Barry's fiancee for the first time... 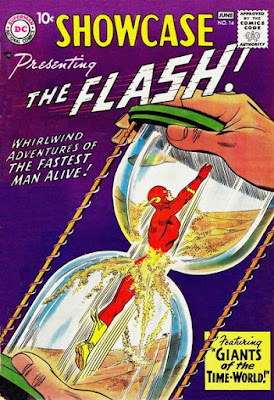 Showcase #14 (May-June, 1958) by John Broome, Carmine Infantino and Frank Giacoia, features the story of "The Man Who Changed The Earth".

This is the first appearance of Dr. Alchemy (though not cover featured), but not the first appearance of this Flash foe.  The doctor had appeared in the previous issue of Showcase as Mr. Element, and while in jail, learned of the Philosopher's Stone, which allows its user to manipulate elements, which the newly named Dr. Alchemy uses to rob banks.

This pulls him into a battle with the Flash, who Dr. Alchemy is able to thwart for a time using the stone, but eventually Flash is able to capture Dr. Alchemy, with Flash supposedly ending Alchemy's threat forever, by throwing the stone into space (though this does not stop both Dr. Alchemy and Mr. Element from returning!). 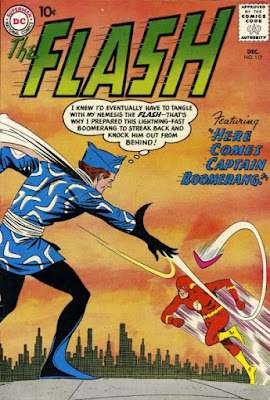 "Here Comes Captain Boomerang" is the title of the story from Flash #117 (December, 1960) by John Broome, Carmine Infantino and Murphy Anderson that introduces the Australian born villain.

W.W. Wiggins, the head of a large toy manufacturing company, decides to start marketing boomerangs in America, coming up with the idea of having a mascot to advertise boomerangs, with small time thief "Digger" Harkness answering the ad.

"Digger" uses his new identity as Captain Boomerang to disguise robberies that he performs, with Flash quickly figuring out the plan...at least until Flash meets an elderly couple that seemed to be Boomerang's parents who clear the man.  This works until Captain Boomerang tries another robbery....and to send Flash into space tied to a giant boomerang!  Flash escapes, and captures Boomerang (and his criminal cohorts who were pretending to be his parents....but, Captain Boomerang, like his namesake, continues to return, both facing the Flash and later, as a member of the Suicide Squad!). 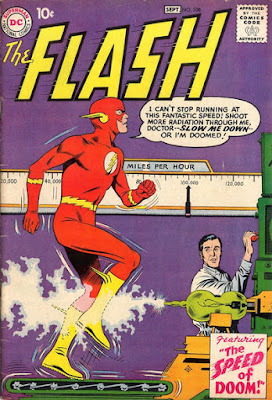 Last, but not least, is the story from Flash #108 (August-September, 1959) of "The Super Gorilla's Secret Identity" by John Broome, Carmine Infantino and Joe Giella, the last issue of the trilogy of Gorilla Grodd (though DC monkeyed around, not featuring Grodd on the covers).

Grodd escapes Gorilla City again, this time using an evolution-accelerator to become a man (with a super-evolved brain), adopting the identity of Drew Drowden, who is up for the man of the year award, having made a great deal of money in the stock market.  As Drowden, Grodd built a factory to make a pill that would give him the control of mind over matter, but Flash, investigating Drowden, finds him....and Drowden reverts to Grodd to face his foe, but is defeated, and returned to Gorilla City.  Grodd would return, many times! 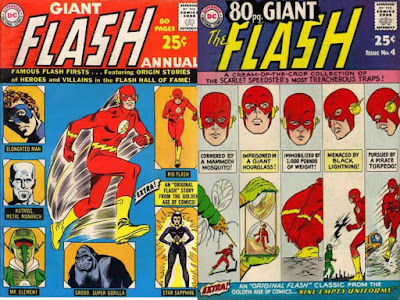 This was the second of two 80 Page Giants featuring the Flash, all stemming back from the first Flash Annual (which includes Mr. Element's and Grodd's first appearance) and Flash continues oversized reprints in his own title as well after the 80 Page Giants end as a separate entity...

...and you can take a look at Jay's stories in them here!
Posted by Dave's Not Here Comic Blog at 3:49 AM