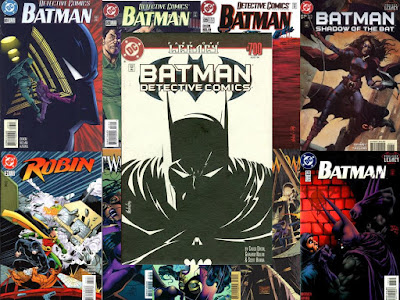 Unlike other anniversary issues of Detective Comics, Detective Comics #700 (August, 1996) had some set up going into it (and then the issue itself kicked off a run of stories over multiple titles of the Batman family of comic books).

So, to give you a better understanding of the issue (and events after), a little bit of set up is required in this case.... 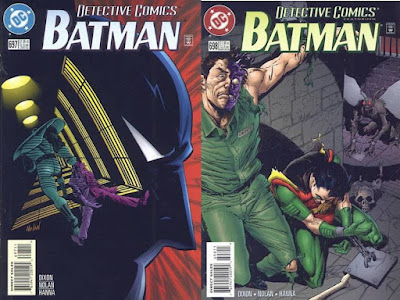 Starting off, Chuck Dixon, Graham Nolan and Scott Hanna took a little time to flesh out the recently introduced Lock-Up (Lyle Bolton) in the June, Early and Late July 1996 issues of Detective Comics.  Lock-Up was a criminal hunter, who captured people he deemed criminals and, well, locked them up.

Currently in his private prison on the outskirts of Gotham were the Allergent (Maxwell Veezey) and Charaxes (the former Killer Moth, Neron-enhanced). 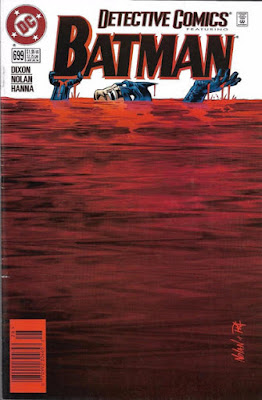 Lock-Up then took Two-Face (Harvey Dent) out of police custody into his prison.  Batman, his current Robin (Tim Drake) and former Robin (Nightwing, a.k.a Dick Grayson) were on the case, but it was Harvey Bullock and the GCPD who captured Lock-Up....but, they had to free him (with Batman, Nightwing and Robin taking on criminal identities so they could be caught by Lock-Up, find his prisoners, then bring Lock-Up and the other criminals to justice, as no one else knew where the criminals were except for Bolton).

Robin got captured, using the identity of Alvin Draper, and due to a short in the communication system, it took Batman and Nightwing a little time to find him, capture the criminals, including Lock-Up. 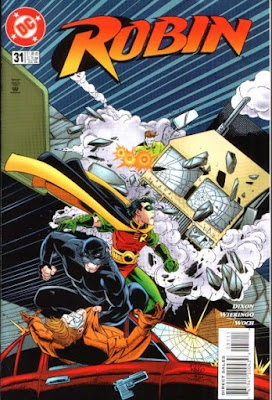 Tim Drake took a little break from heroics, and took his girlfriend, Ariana, to a car show, where he saw old time boxing champ Ted Grant in this Chuck Dixon, Mike Wieringo and Stan Woch July, 1996 issue of Robin.  Problem is, car thieves, the Speedboyz, were there as well, so Tim had to suit up as Robin to try to stop them.  Luckily, Robin got some help, as Ted Grant wasn't just a former boxer, but was also the hero Wildcat of the Justice Society of America (and the man who taught young Bruce Wayne to box).  The two heroes stopped the villains (leaving readers wanting to see Wildcat involved with Batman and his family even more), with Robin returning to the Batcave.

Meanwhile, Batman got the call from Com. Gordon, that former Mayor Krol died of a resurgence of the Clench, a disease that recently infected many Gothamites, including a young Tim Drake. 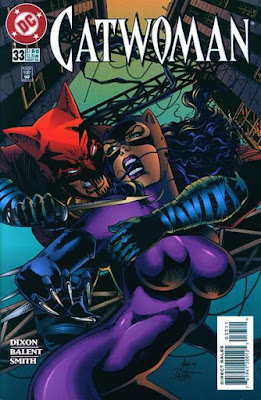 Selina Kyle had left Gotham to avoid the Contagion known as the Clench, taking on a job in Rheelasia (in the Indonesian Islands) that she really didn't enjoy (starting off these three issues by Chuck Dixon, Jim Balent and Bob Smith, running May to July, 1996).

Catwoman was then captured by her foe, Hellhound, who was recruiting her for the Collector, who paired her with Brother Umberto, a former member of the Order of San Dumas (the cult Azrael, Jean-Paul Valley, had battled and been trained by).

It took a bit of convincing to get Catwoman to take on this new job (but Selina's attempts to escape almost got her killed, which also made her a little more willing to take the job). 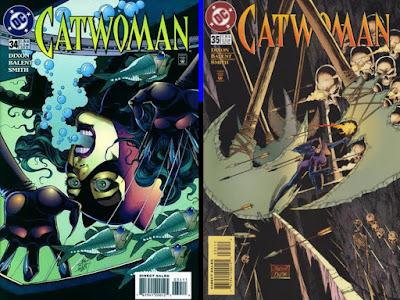 The Collector had a buyer who wanted a treasure in a tomb in the middle of the African desert, and thought of recruiting Catwoman for her exceptional thieving skills, with Umberto there to help because of his knowledge of the Order of San Dumas.  With a bit of work, the two cleared the traps to get to the Great Wheel, but were betrayed by Hellhound, who had Catwoman imprisoned, where she recognized one of the men who employed the Collector.....

Batman: Shadow of the Bat 53 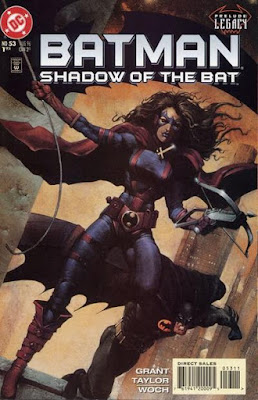 Helena Bertinelli, known as the Huntress, was still active in Gotham (recently running afoul of Batman and working with Robin) in the August, 1996 issue by Alan Grant, Dave Taylor and Stan Woch.

Bruce notified Dick of the fact that his Clench virus might come back to kill him.  Gordon, Penguin and other Gotham residents reacted to the news that the Clench may return.  Oracle (Barbara Gordon) used her information to contact Azrael (Jean-Paul Valley), who gave her a little information about the origins of the Clench, and hints at a possible cure to be found in the African desert from a time when the Order of San Dumas faced "the immortal".

Batman told Gordon that he and his usual crew were leaving Gotham for a bit, while Robin informed Huntress that Batman had entrusted her with the safety of Gotham while Batman, Nightwing and he were gone (heading to Africa to look for the cure). 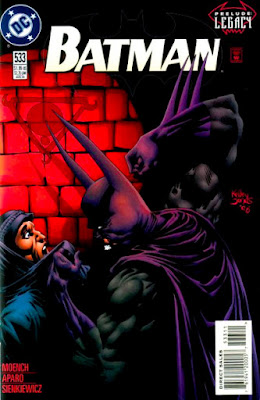 The August, 1996 issue of Batman was the last of the prelude issues (by Doug Moench, Jim Aparo and Bill Sienkiewicz, with Batman, Nightwing and Robin winging their way to the Sudanese desert to look for the "Wheel Of Plagues".  Back in Gotham, Penguin tries to figure out how to release information that the Clench is back to cause panic, as Gordon and the Huntress work to prevent a quarantine of the city (and the panic that knowing that plague is returning).  Batman and his two helpers end up in the desert, finding out that this "immortal" had tried to use the Clench as a weapon against mankind before...and, after learning this, met up with armed forces controlled by the mystery men in charge of this menace.....

....whose identities would be revealed in Detective Comics #700. 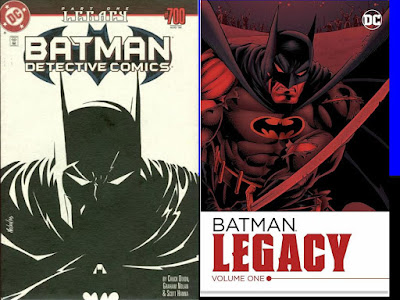 Now, this gives you plenty of time to find and read all these issues to deduce the identity of the villain (or, just track down Batman: The Legacy Part 1, which reprints all these issues plus Detective Comics #700).  Or, just come back here next week, same Bat-time, same Bat-channel, and read my review of the issues of Batman: Legacy!