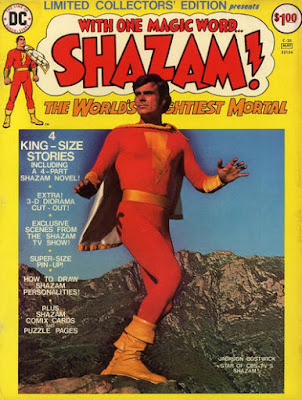 Limited Collector's Edition #C-35 (April-May, 1975) doesn't have an artist who did the front cover, but instead has a photo, featuring the Captain Marvel of the Shazam! TV show of the 1970s, Jackson Bostwick!

Even better, this oversized issue also contains 4 classic Fawcett Captain Marvel stories (as well as a few other extras).


Holy Moley, let's take a look at what's inside this exciting issue! 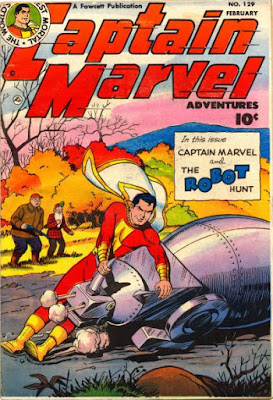 First up is the story from Captain Marvel Adventures #129 (February, 1952) by Otto Binder and C.C. Beck, under an original cover by Beck.

Billy Batson's boss, Sterling Morris, wants to learn how to hunt, but can't bring himself to kill any animals.

Scientist Doc Quartz (a friend of Billy and Sterling's) builds the radio station owner some robot animals to go after that he can feel safe shooting at...

....but, things quickly go wrong, so Billy ends up having to say "Shazam!" to bring out Captain Marvel to bring down some of these robotic beasts!


Captain Marvel Battles The Plot Against The Universe 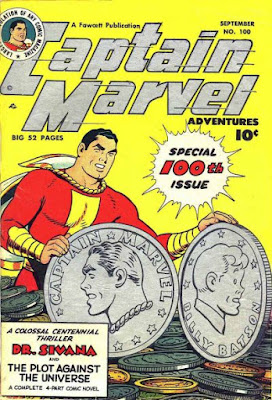 Next, a full length tale from Captain Marvel Adventures #100 (September, 1949) by Otto Binder, C.C. Beck and Pete Costanza, with the Big Red Cheese facing his most fearsome foe, the dreaded Dr. Sivana for a full length issue!

Sivana makes plans against the old Wizard (Shazam) who gave Billy his powers, but can't find him.  Billy takes his buddy, talking tiger Tawky Tawny, to see the Wizard....which Sivana finds out about, then learns that Shazam manifests using a bracelet of Shazamium.  Sivana tries traveling back into the past to undo Cap's origin, but Tawny stops him (though Sivana escapes).  Returning to modern times, Sivana goes to the Wizard and tricks him, getting his Shazamium bracelet.  This allows Sivana to go on the offensive against Captain Marvel.  Sivana gets Billy to build robot duplicates of the evil scientist, but Billy finds a way to trick Sivana, eventually getting the bracelet back and saving the spirit of Shazam! 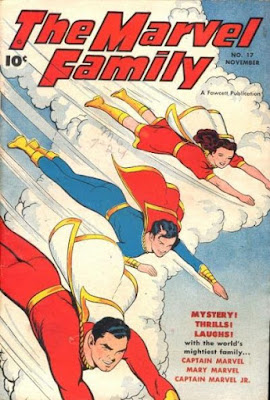 A look at the Batson family from Marvel Family #17 (November, 1947) by William Woolfolk and Kurt Schaffenberger!

Freddy Freeman (Captain Marvel, Jr.) finds out about William Batson, an ancestor of Billy and Mary's, who was a leader of the Salem witch trials while going through Billy's documents.


One of those witches put a curse on the Batson family, which was going to hit the current Batsons.

Thankfully, Freddy had time to say his magic word (Captain Marvel), and, as Captain Marvel Jr., was able to save Billy and Mary from the curse just in time! 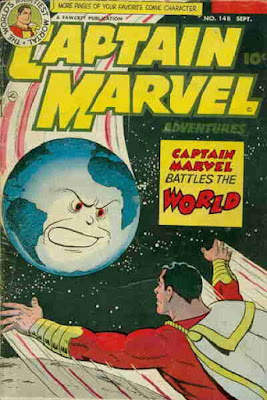 The last story of the issue is from Captain Marvel Adventures #148 (September, 1953) by Otto Binder and C.C. Beck, with Cap facing the whole world!


The Earth is getting tired of having all these human beings on it, so it decides to try to end all of humanity.


Captain Marvel has to stop the disasters the planet is causing, then saves the Earth from a comet that was on course towards the Earth, which convinces the planet Earth that humans might be worthwhile after all, so it stops attacking! 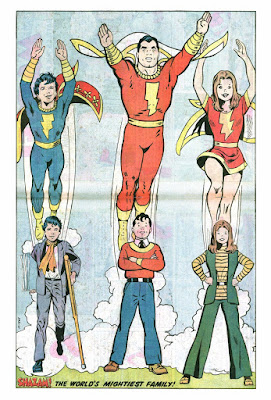 Plus, the issue had pin-ups, puzzles, a feature on how to draw the Marvel Family and a 3-D cut-out on the back cover!