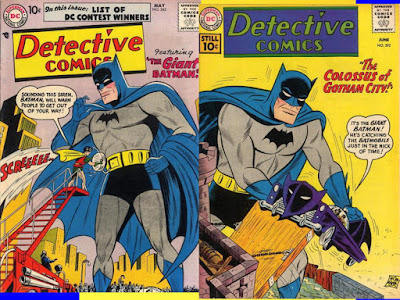 Batman had giant issues.....and issues of being a giant!

There were a few times in his career that Batman was truly larger than life, so let's take a look at the Detective Comics where that happened! 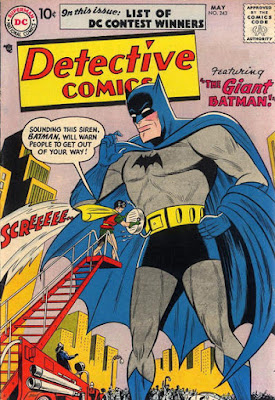 First up, the story from Detective Comics #243 (May, 1957) by Edmond Hamilton, Dick Sprang and Charles Paris, wherein Batman became truly larger than life!

Batman gets hit by a maximizer ray while trying to stop a thief.  His own growth to 30 feet tall slows down pursuit of the thief, Jay Vanney, who makes away with the minimizer. So, the larger Batman, after finding out from the inventor of the devices that he won't be able to make another minimizer, takes the maximizer with him as he hunts for Vanney.  Finding him, Batman enlarges Vanney, and the two giants battle.  Robin finds where Vanney hid the minimizer, and exposes both Batman and Vanney to its rays, bringing them both to normal size.  Then, since the rare substance that powered them both ran out, the Dynamic Duo figured they'd never have to worry about gigantism again!

The Colossus Of Gotham City 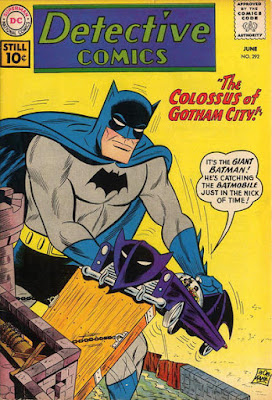 This time around, Batman was exposed to an experimental gas while he and Robin were chasing a criminal, Rockets Rogan, into a laboratory, causing Batman to grow.  Batman still chases the criminals, but again, his size makes this difficult, including getting captured and having his unmasked face revealed (thankfully, Batman had disguised his face previously, fearing that, with Batwoman helping Robin this time, that he may have had to remove his mask, and didn't want to expose his identity to her).  The gas eventually wears off, with Batman catching the crook (and having Superman fill in as Bruce Wayne to help confuse Batwoman).

Two Batmen Too Many 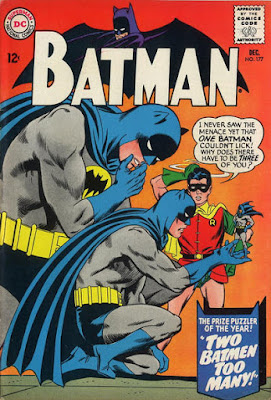 As a little extra, Batman #177 (December, 1965) by Bill Finger, Sheldon Moldoff and Joe Giella (under a cover by Carmine Infantino and Joe Giella).

Thief Ed "Numbers" Garvey got away with the Kimber Gem Collection.  Batman is keeping an eye on him to find the jewel collection, to find where he stashed them.  Garvey leaves Gotham, and ends up in a cave in a mountain after being taken off the road by a landside.  In that cave are two figures, one small, one large.  The figures are struck by a light and become a bigger and smaller version of Batman, both seemingly under Garvey's control.  Garvey takes his Batmen back to Gotham to commit more crimes, but they say they need the gems to get recharged.  Suspicious, Garvey knocks them out, finding out they are really Elongated Man and Atom disguised as Batmen....with Batman breaking in to capture Garvey before he can hurt either of them.  Batman, proving his detective prowess, deduces where Garvey hid the gems by where he and the two Batmen had been.