Love For Richard And Barbara 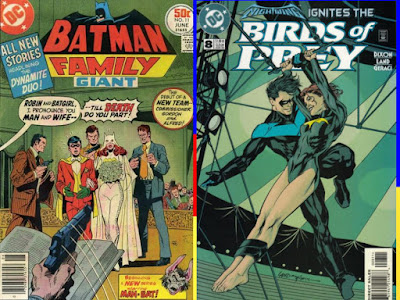 Dick and Babs had plenty of history together, but it took years for them to find time together alone, away from Batman....

...and in that time the two went from close, to closer.

Here's a quick look back at how things evolved, from the days of their first solo team-up, that started in the pages of Detective Comics #400. 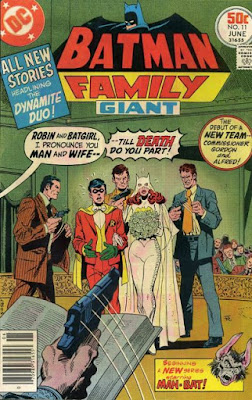 Dick Grayson had gotten away from Batman, taking his Robin act as the Teen Wonder to Hudson University (which seemed to be a little closer to Washington, DC, where Barbara Gordon was still working as Batgirl).  The two started on and off pairings in the pages of Batman Family, with the Jim Aparo cover of Batman Family #11 (May-June, 1977 by Bob Rozakis, Curt Swan and Vince Colletta) showing a good place to show that Robin and Batgirl might be getting closer (and over the next few issues, Dick even tried telling Babs about his feeling for her...but, things didn't quite work out, and Robin and Batgirl only had a few more adventures together, then were having separate adventures by the time Batman Family moved over to Detective Comics).

Robin eventually went to work with the Teen Titans as they came back as the New Teen Titans, with Cyborg, Starfire and Raven, and Batgirl mostly kept to herself, being in semi-retirement.

Dick eventually changed his identity to Nightwing, then parted from the Titans for a while, landing in Bludhaven, while Barbara had been shot by the Joker, being confined to a wheelchair, and helping the Suicide Squad, Batman, the new Robin (Tim Drake) and Azrael as Oracle (an online personality Barbara created to help heroes against the ever growing legions of villains). 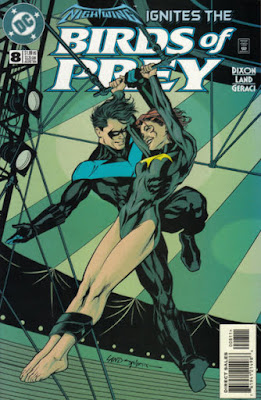 Barbara had also rescued the Black Canary (Dinah Laurel Lance) who had been suffering depression and a lack of direction since the apparent death of Green Arrow (Oliver Queen).  Oracle used her as her field agent, allowing Barbara the ability to have someone working directly to right wrongs (and giving Dinah a chance to do good and get on with her life).

Nightwing also used the services of Oracle, but, on one particular day, Dick decided to help his friend, Babs, relax, taking her up in the air for a special time (helped with a harness) allowing Babs to swing through the air (all in the pages of Birds of Prey #8 of August, 1999 by Chuck Dixon, Greg Land and Drew Geraci, under a cover by Land and Brian Stelfreeze). 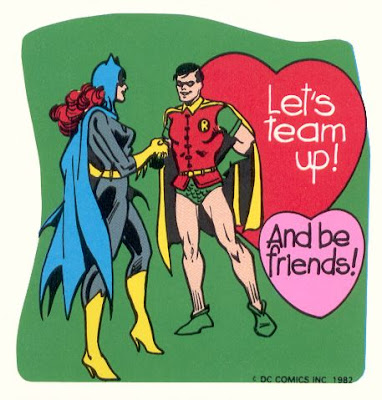 This led to a relationship between Dick and Babs that continued for some time....but, for Valentine's Day, the focus will just remain on the happy times of their relationship!
Posted by Dave's Not Here Comic Blog at 4:34 AM