Conway's Corner of the Justice League of America 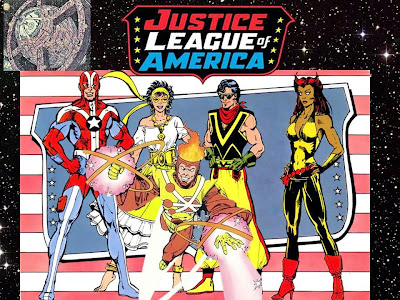 This time around, it's all Conway's Corner of the JLA....the members of the Justice League of America that Gerry Conway co-created, and then brought into the JLA! 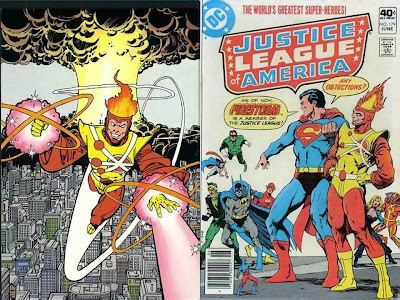 Ronnie Raymond and Martin Stein met by accident...a nuclear accident no less!  In Firestorm #1 (March, 1978, by Gerry Conway and Al Milgrom), high school jock Ronnie Raymond was convinced to break into the Hudson Nuclear Facility (which had been designed by Professor Martin Stein) by activist Edward Earhart (all so Ronnie could impress his girl, Doreen Day, and smite his school nemesis of Cliff Carmichael).  Martin Stein wanted to start the nuclear facility early, as Stein had been falsely accused by his assistant, Danton Black, of stealing the designs for the automated plant from Black.  This all came together as the plant was activated, Earhart knocked Raymond and Stein unconscious, locked them in the core and set a bomb to explode to destroy the facility.  Ronnie woke up just before the bomb went off, and Stein and Raymond merged into one nuclear being, Firestorm! 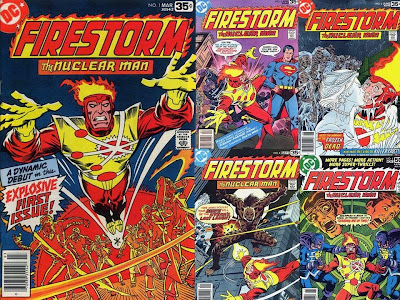 Possessing strength, flight, some degree of invulnerability and nuclear transmutation powers (including the ability to alter his own density, but not other organic beings), Ronnie is in control of the Firestorm entity, with Martin only there as an advisor (and, for a time, unaware of his co-identity as Firestorm).  During his first five issues, Firestorm faced Multiplex (Danton Black), Killer Frost (Crystal Frost) and the Hyena ...and was all set of face the menace of Typhoon in issue #6...but Firestorm was cancelled with Firestorm #5 (October-November, 1978, as part of the DC Implosion, with all issue by Conway and Milgrom). 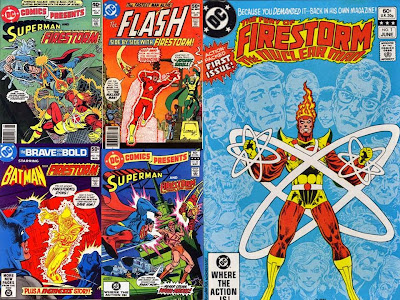 But, Firestorm met Superman in those early issues, and met him again in DC Comics Presents #17 (January, 1980, by Gerry Conway and Jose Luis Garcia-Lopez), wherein Ronnie explained to Superman that Firestorm was messing up his (and Martin Stein's) life, and gave up being Firestorm for a time, at least until Superman sponsored him to be in the JLA, which happened in Justice League of America #179 (June, 1980, by Gerry Conway and Dick Dillin), wherein (in this and the next issue, the League faced off against the Satin Satan).  This led to Green Arrow leaving the JLA for a time (taking the street hero idea Black Lightning professed to), and for a back-up series in the Flash for Firestorm as well, starting with Flash #289 (September, 1980, by Conway and George Perez), and even a team-up with Flash in Flash #293 (January, 1981, facing off against Superman foe, the Atomic Skull), as well as regular standing in the JLA, and even a team up with Batman in Brave and the Bold (#172, in March, 1981) and another with Superman in DC Comics Presents #45 (May, 1982), remaining in the back of Flash until #304 (fighting Typhoon, Multiplex and Hyena),  before getting his own title, the Fury of Firestorm (written by Conway, and art to start by Pat Broderick, starting in June, 1982). 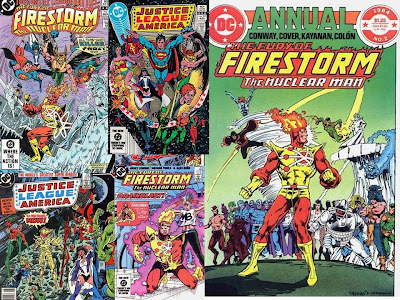 Firestorm was a regular fixture in the JLA, being especially close to Red Tornado after learning Reddy's secret, and facing many new foes, like Black Bison, Pan, Firehawk, the Enforcer, Tokamok, Slipknot, the Mindboggler and more in his own title....at least until original member, Martian Manhunter returned ahead of his own people, and the team fractured during the Earth-Mars War....with Aquaman dismissing any team member who couldn't fully commit to the team (which meant Firestorm and others were out, leaving the JLA down to Aquaman, Martian Manhunter, Zatanna and Elongated Man, who brought along his wife, Sue), and the team without a headquarters (as the JLA Satellite had been severely damaged during the Martian battle....).


New Kids On The Block 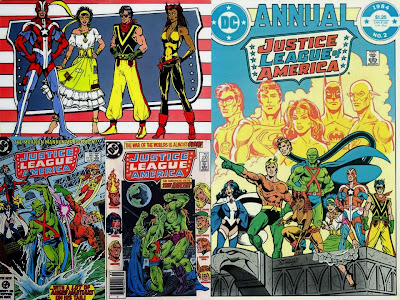 Aquaman dismissed the original JLA, found new members, Vixen and Steel, and Steel provided a new headquarters, the Bunker, based in Detroit (and, there, they got an additional member, Vibe, and met a local super powered girl, Gypsy)...

Each of these characters had their own history, and some even before the JLA Annual.... 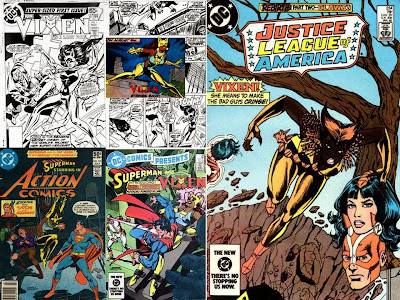 Vixen was a victim of the DC Implosion, because Vixen #1 was cancelled before the title was even finished!  Mari McCabe was a model who used the power of Tantu Totem (a mystic artifact given to her ancestors, with which she is able to control the powers of the animals via the morphogenic field).  Mari had taken this icon from her uncle, General Maksai of Zambesi, who killed the Reverend Jiwe (who was raising Mari in Africa, until the general had him killed). 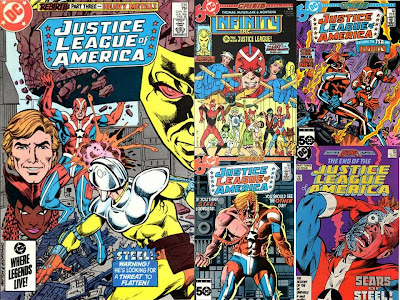 Steel was a legacy, as his grandfather was Commander Steel of the All-Star Squadron during World War II.  Hank Heywood III volunteered to become a cyborg (unlike his grandfather) to enable himself to become a hero, and he supplied the headquarters called the Bunker (located in Detroit) as a headquarters for the new Justice League (as well as Dale Gunn, who worked for the first Hank Heywood, and ended up supporting the new JLA).

Hank's powers as Steel were strength, speed, the invulnerability (at least as much as metal), and enhanced senses (making him a super-hero version of the Six Million Dollar Man), and came from the operations his grandfather had performed on the young man to quite literally make him a hero. 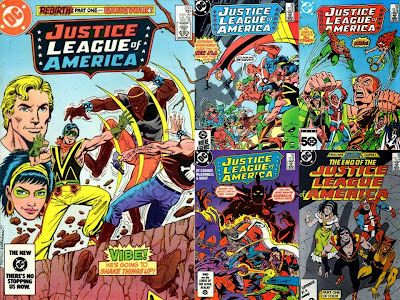 Vibe was an Hispanic breakdancer street thug with vibration powers...seems simple enough.  Paco Ramone grew up as part of a large family in Detroit, Michigan, and became a member of the street gang, "El Lobos" (how it was originally, it should have been "Los Lobos"), and while could speak perfect English, used to fake dialogue in a mix of Spanish and English.

Vibe joined the JLA when they ended up in his backyard with their new HQ in Detroit, and his fiery personality and youth clashed with more experienced members of the team (and, Vibe was none to happy that his sister, Rosa, was infatuated with Steel). 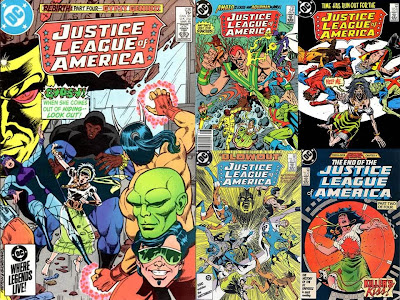 Gypsy liked to hide, just blending into the background.  Cindy Reynolds was just an unhappy suburban kid, who had her powers cast illusions and chameleon into the background (not quite invisibility, but close) develop when she became 14, at which time she ran away from home to end up in Detroit, where she took up her look and the myth of being the Gypsy of Cameron Street (also coincidentally near the closed plant where the JLA would call home). 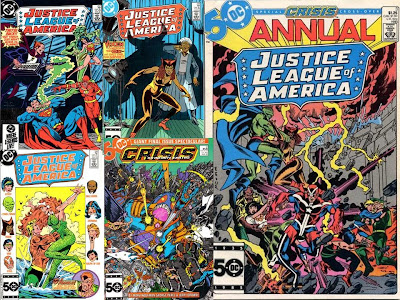 This new JLA faced new villains like the Maestro (Pasha Gorki), the Ox (General Maksai), and Adam, as well as classic JLA foes like Amazo, the Lord of Time and Despero.  The team even participated in a team-up with the Justice Society of America (as JLA/JSA Crises had become a regular event, and this one also included Infinity, Inc., the inheritors of the JSA and Infinity, Inc. #19 of October, 1985), and this led them into the Crisis on Infinite Earths (and the total destruction of the JLA Satellite)... 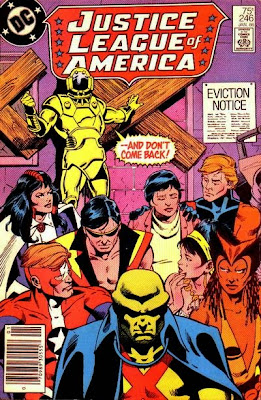 ...even meeting up with past JLAers like Superman, Batman, Green Arrow, Black Canary and Firestorm in finding the fate of the Red Tornado in Justice League of America Annual #3 (1985). 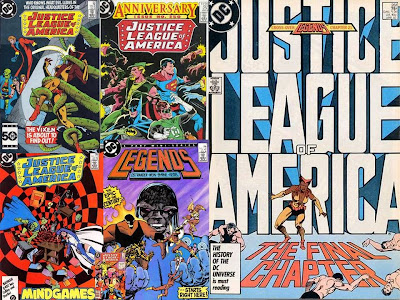 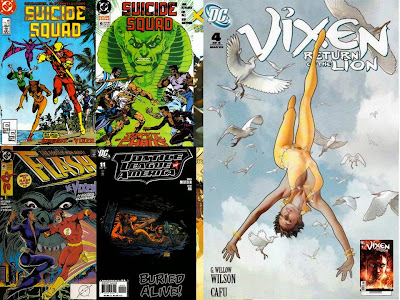 Vixen moved over to the Suicide Squad starting with Suicide Squad #11 (March, 1988 by John Ostrander and Luke McDonnell) where she worked with folks like Speedy and Captain Boomerang, and she was a mainstay of the team (and fighting with Amanda Waller) until the War of the Gods.  Vixen also guest-stared in books like Animal Man and the Flash, and even ended up back in the newer Justice League of America with Red Arrow/Arsenal (the former Speedy).   Vixen even got her own five issue mini-series in 2008 and 2009 by G. Willow Wilson and Cafu. 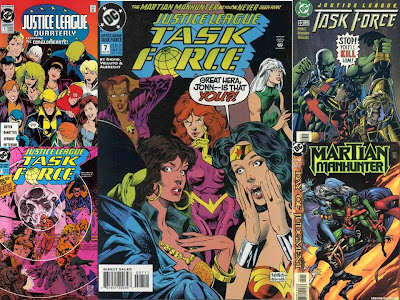 Gypsy popped up for a brief time in Justice League America as Despero finished off her family, and thus she joined Booster Gold's Conglomerate (along with Vibe's brother, now going as Reverb and other heroes like Echo and Maxi-Man in Justice League Quarterly #1, Winter 1990).  Martian Manhunter recruited her for his Justice League Task Force, where she remained a member for its 38 issue run, and later, in the Martian Manhunter's own book (Martian Manhunter #25, in December, 2000 by John Ostrander and Tom Mandrake, after an earlier appearance in Martian Manhunter #12 in November, 1999 by Ostrander/Mandrake, where J'onn and Gypsy dealt with the remains of Vibe and Steel), it was revealed that Gypsy might be one of many descendants of Martians (which explains where her powers came from!). 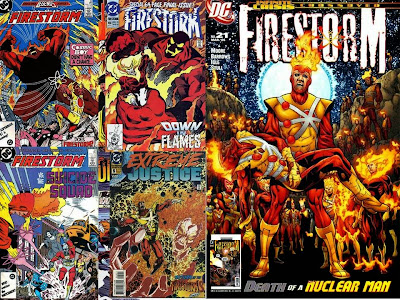 Firestorm continued on after the Crisis on Infinite Earths, and even Legends, with his title getting a new writer with John Ostrander with Fury of Firestorm #55 (January, 1987), and many of Firestorm's foes ending up (and just ending) in the Suicide Squad (including Mindboggler, Plastique and Slipknot).  Firestorm himself underwent changes, becoming an elemental (and dealing with all that entails, including Red Tornado) before the series ended with Firestorm #100 (August, 1990), with Martin Stein as Firestorm.  Ronnie eventually got back his Firestorm powers as well, and worked with Captain Atom, Blue Beetle and more in Extreme Justice (having slightly reduced powers and no Martin Stein in his head) for the run of Extreme Justice.  After the Identity Crisis, Detroit high school student Jason Rusch got added to the Firestorm matrix!

All of this...and they were still the great creations of Gerry Conway! 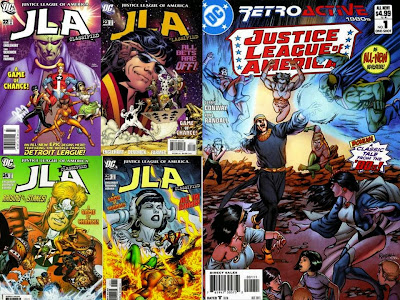 The "Detroit League" even had a few later additions, with looks back at their time such as JLA: Classified #22-#25 by Steve Englehart and Tom Derenick (and covers by Mike Zeck and Jerry Ordway) with the team facing two versions of the Royal Flush Gang, and Gerry Conway and Ron Randall having the team face off against Felix Faust in DC Retroactive: JLA - The '80s in October, 2011! 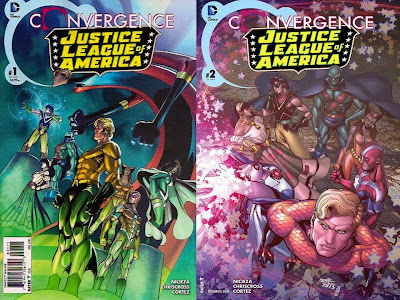 Even better, the JLA made in the Motor City comes back as part of DC's Convergence, with Convergence: Justice League of America #1 and #2 (June and July, 2015) by Fabian Nicieza and ChrisCross!

Seems Detroit will still hold on to its super-heroes!