The Opposite of the Avengers: Squadron Sinister 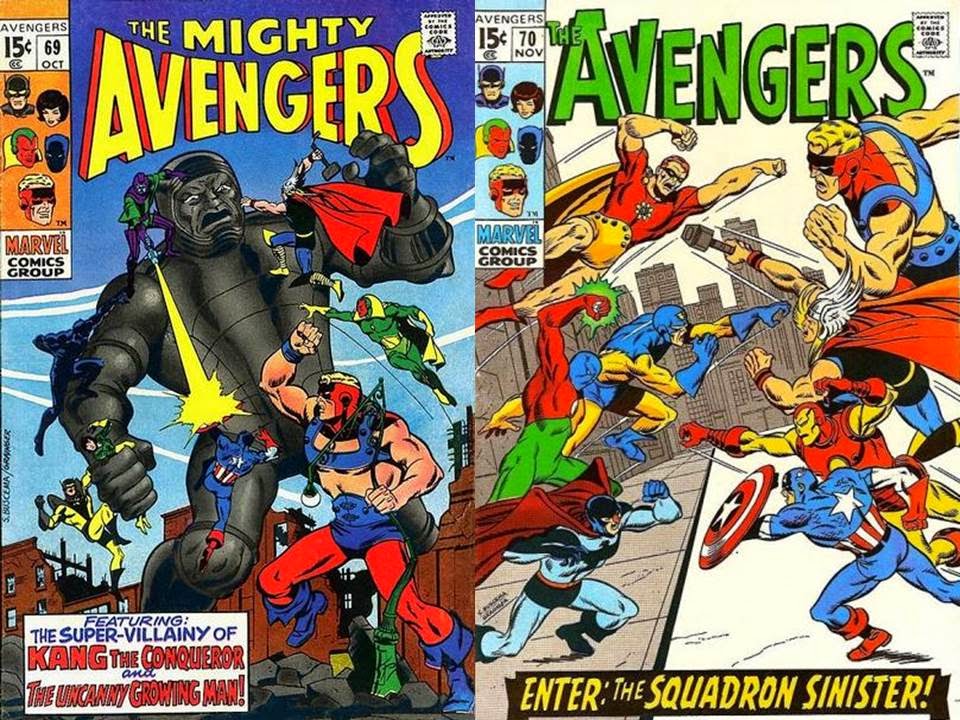 Remember that time in the 1960s, when the Avengers faced off against Superman, Batman, Flash and Green Lantern?


Probably because it didn't quite happen that way. 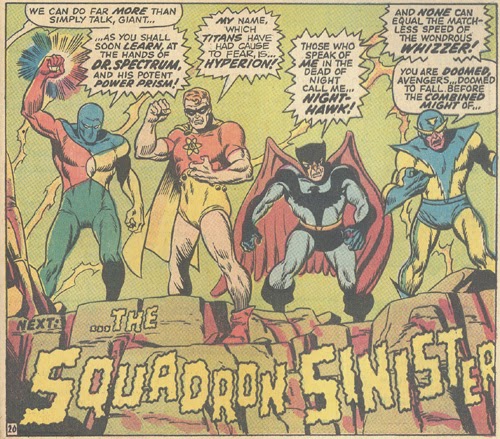 What did happen is that the Avengers fought the Squadron Sinister, a group of villains created by the Grandmaster (based on another world's heroes)....all in the pages of Avengers #69 and #70 (October and November, 1969, by Roy Thomas and Sal Buscema).

These four villains might have looked familiar to comic readers of the time... 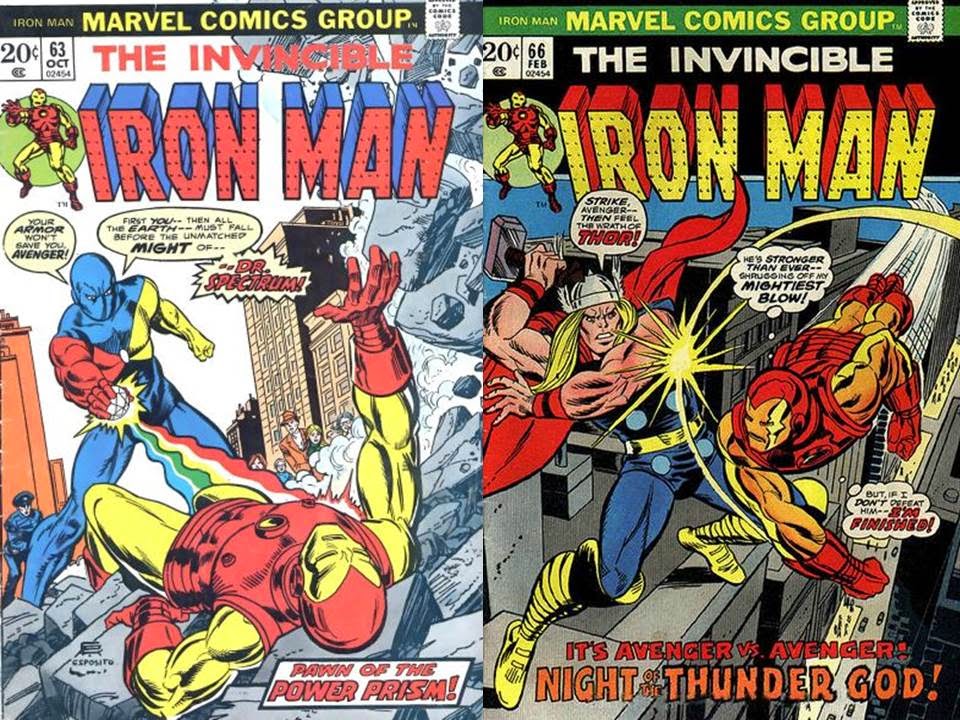 Dr. Kenji Obatu started out as the Ugandan finance minister, but when approached by the Grandmaster with a Power Prism (really a Skrull named Krimonn), he became Dr. Spectrum, master of energy, which he could shape into any form he could will.

After his Avengers appearance, Dr. Spectrum returned to face Iron Man in Iron Man #63-#66 (October, 1973 to February, 1974 by Mike Friedrich and George Tuska), wherein the origin of the Power Prism was revealed, and it tried to take over Tony Stark (thankfully, Thor was able to stop that by smashing the Power Prism). 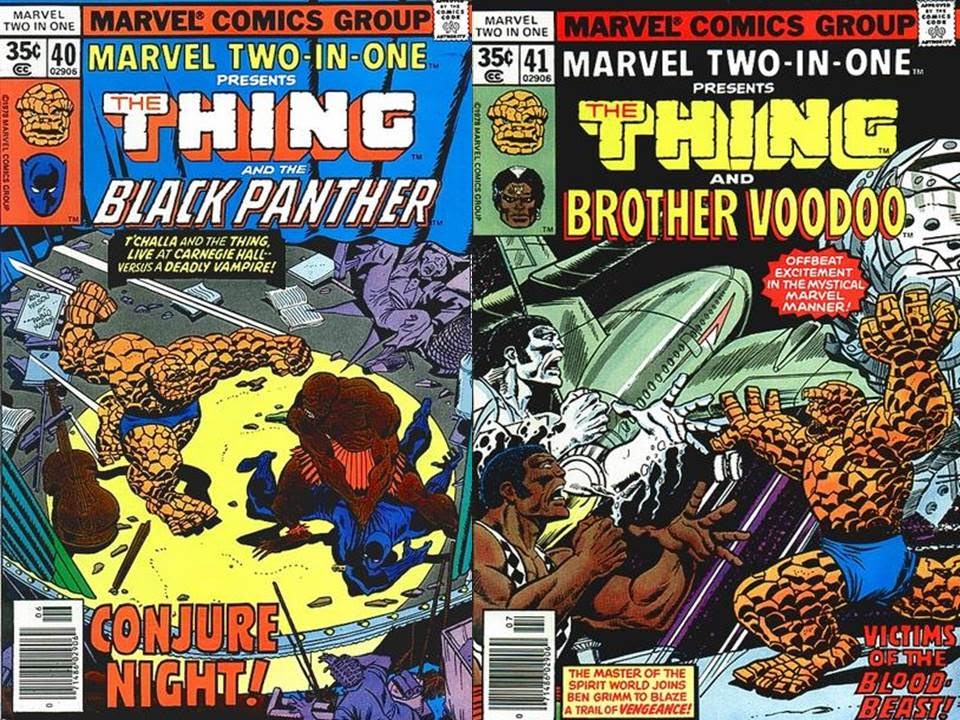 Obatu was deported back to Uganda, where he was to face trial for the crimes he committed...

...but instead found himself allied himself with a witch doctor, and fought the Thing, Black Panther and Brother Voodoo, ending up dead (all in Marvel Two-In-One #40-#41, June and July, 1978, by Roger Slifer and Ron Wilson). 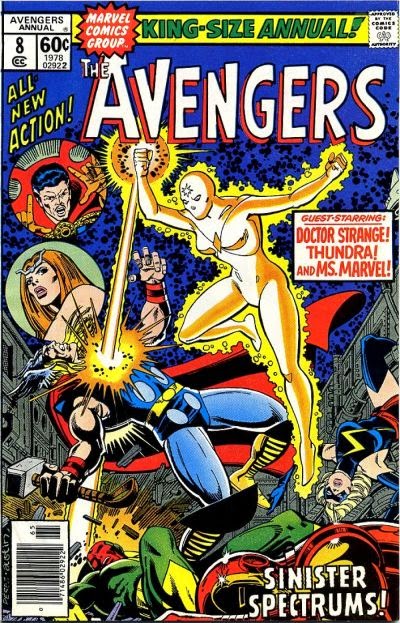 Evangelist Billy Roberts ended up with the Power Prism next, and faced off against the Defenders instead...in Defenders #13-#14 in May and July, 1974 by Len Wein and Sal Buscema and Giant-Size Defenders #4, (April, 1975 by Steve Gerber and Don Heck) losing the Power Prism...

...but trying to get it back in Avengers Annual #8 (in 1978 by Roger Slifer and George Perez, where Yellowjacket had been putting the pieces back together as a gift for the Wasp....which ended up with her briefly being Dr. Spectrum until the Power Prism got imbedded into Thor's hammer, which disappeared after Thor dropping it...). 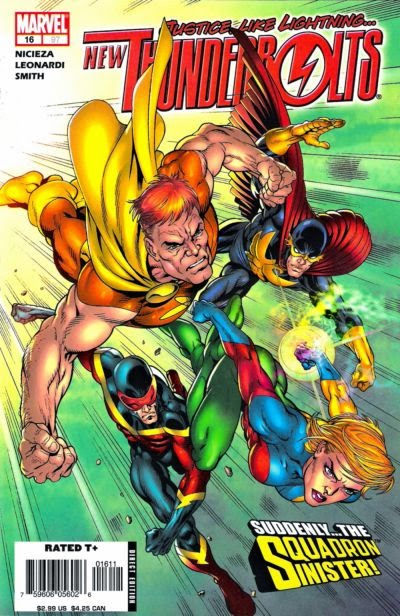 ...though the other members had undergone some changes as well, one in particular, changing his name and costume pretty quickly! 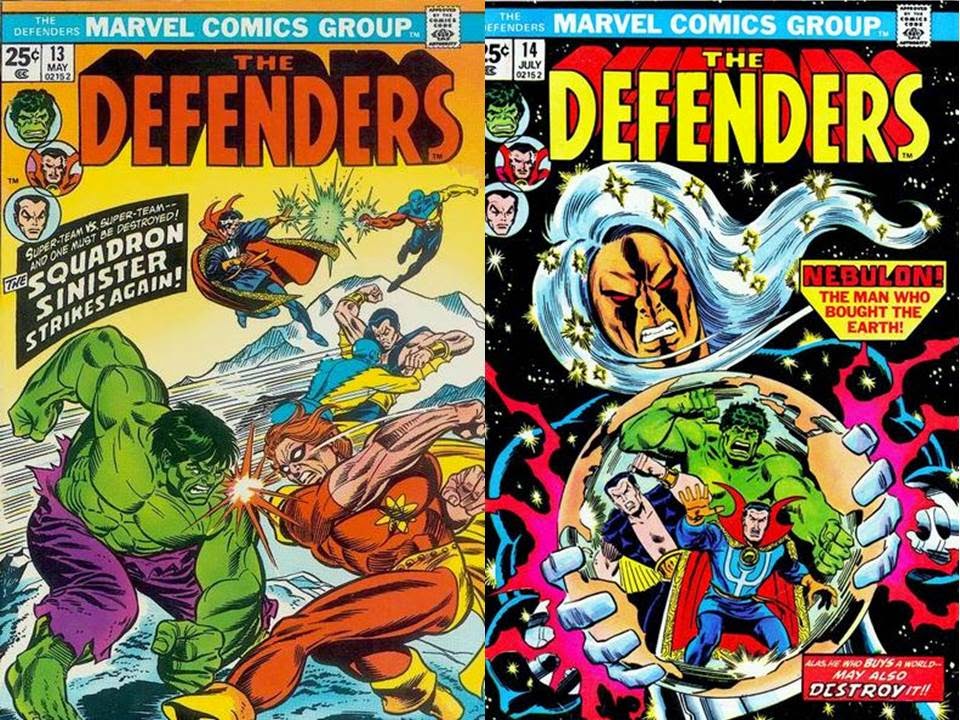 James Sanders was an unhappy chemist, recruited by the Grandmaster in his battle against Kang, and with a formula supplied by Grandmaster, gained super-speed and became the Whizzer!

The Whizzer returned to battle the Defenders when their foe, Nebulon recruited him for Defenders #13-#14, and again in Giant-Size Defenders #4, and had his memory erased by Dr. Strange, getting his old job back at New Jersey's Hudson Pharmaceuticals, until his memory was restored in Avengers Annual #8. 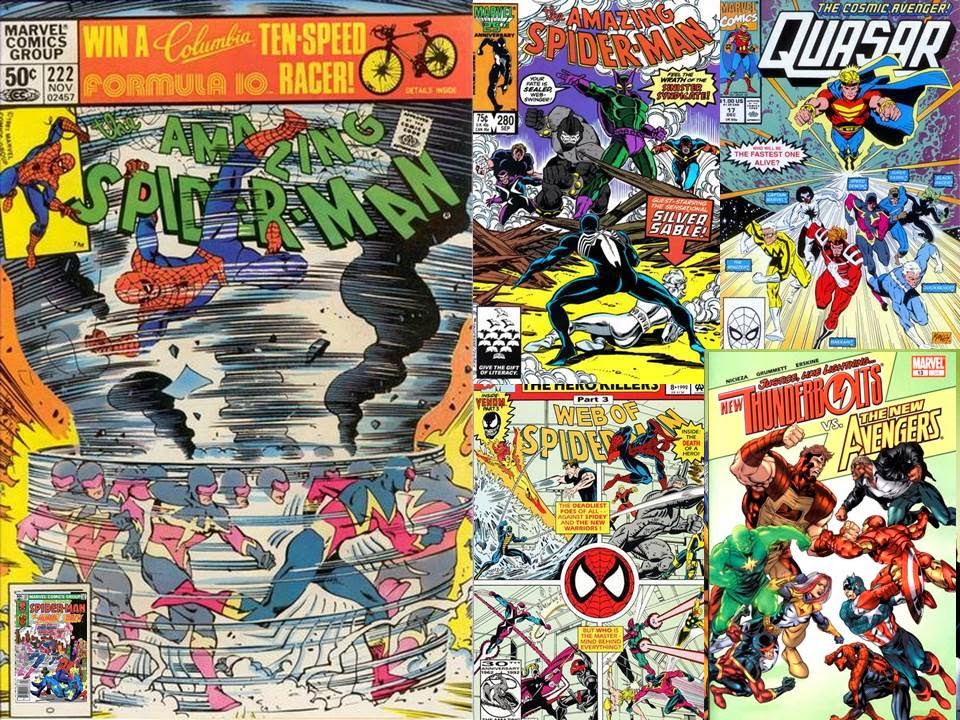 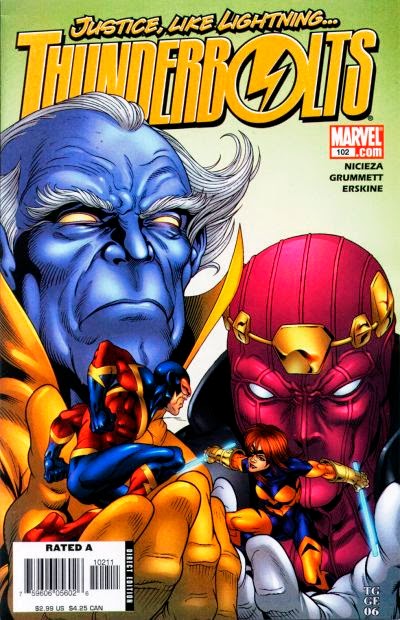 ...and first fighting against and then joining up with the Thunderbolts (with members like the Radioactive Man, and yet occasionally committing crimes in his old identity of the Whizzer, which got him kicked out of the Thunderbolts, and he found himself back with the Squadron Sinister and working with the Grandmaster again).

The Speed Demon also later joined a new Sinister Six (proving this speedy villain had time to run around with most of Marvel's villain groups, which made him a little bit different than the next member of the Squadron Sinister, who switched his way to a more heroic path....). 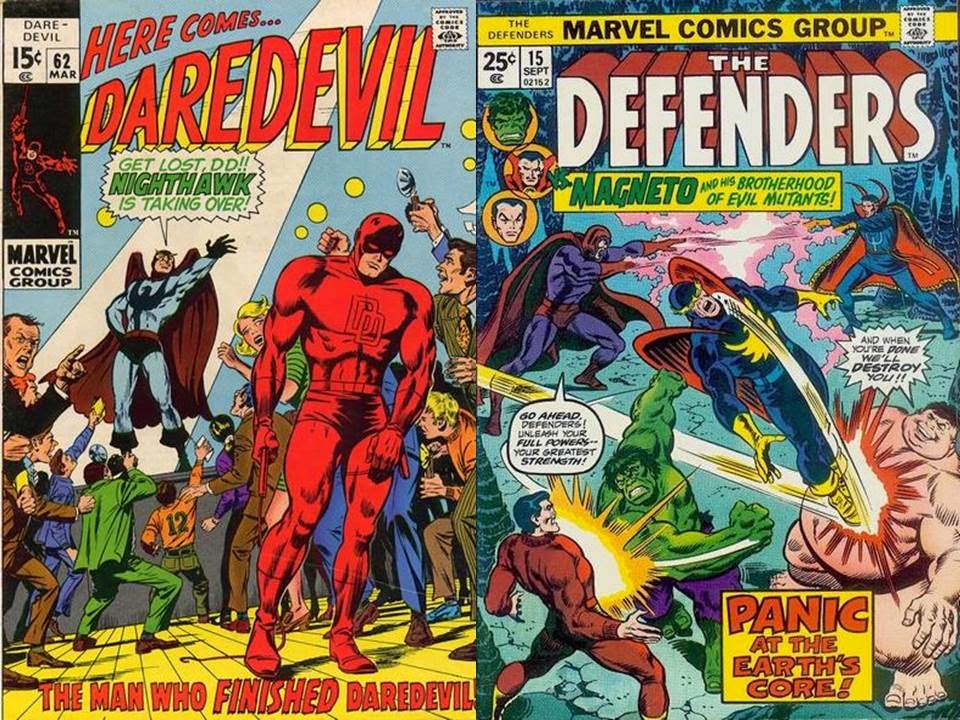 Kyle Richmond was the son of a wealthy businessman named Arthur Richmond, who let his son have everything he wanted, and that let him down a path of destruction, getting kicked out of college and developing a heart murmur.  Kyle's dad then died and he inherited the Richmond fortune, but that did little to give the man focus, until approached by the Grandmaster, who gave him a formula that allowed Kyle better abilities at night, and Kyle used that and his wealth to build items that would help him, and he became Nighthawk. 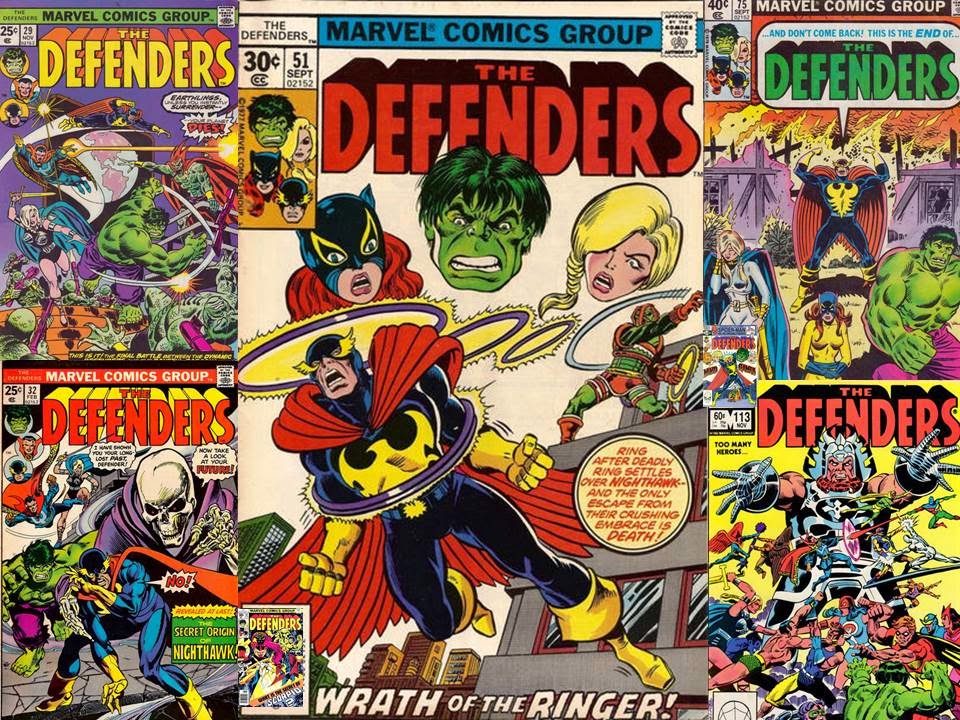 Nighthawk became a very important member of the Defenders, being their for their battles against the Badoon (with the Guardians of the Galaxy), the Headmen, Scorpio, getting his own foe in the Ringer in Defenders #51, going crazy with the over-expansion of the team in "Defenders For A Day", splitting up the team, reuniting with the team, and then dying... 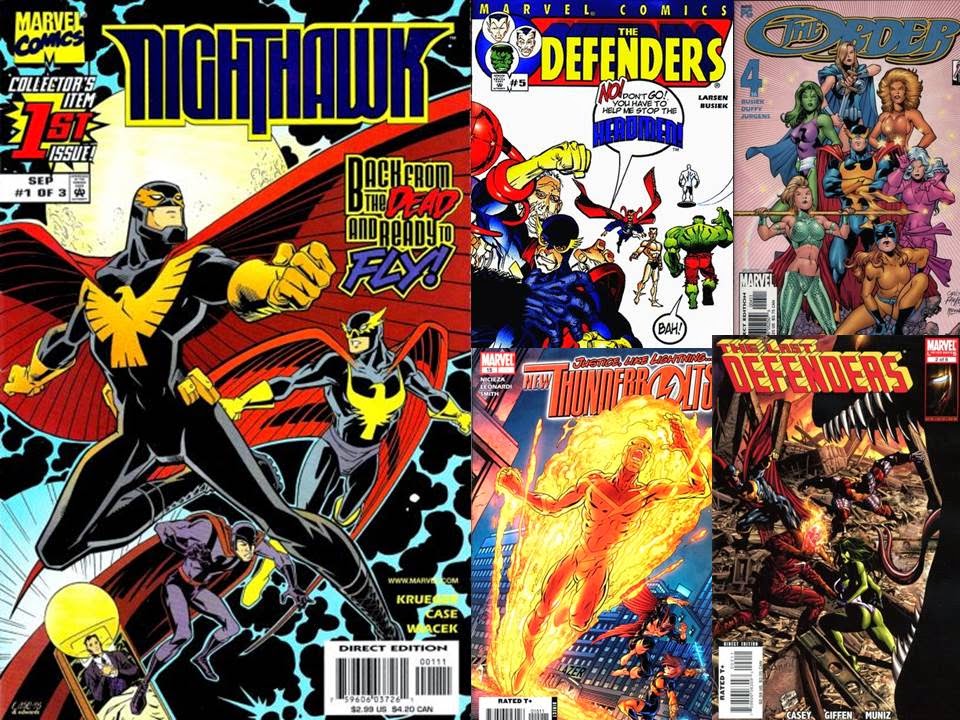 Well, okay, Nighthawk was only mostly dead, as revealed in Nighthawk #1-#3 (September to November, 1998, by Jim Krueger and Richard Case), wherein Nighthawk had been in coma, and revived by an angel (well, really the demon Mephisto in disguise), and fights to save Daredevil's soul.  Nighthawk also rejoined the Defenders (and was involved in the plot by Yandroth which turned the Defenders into the Order (a six issue series from April to September, 2002, by writers Jo Duffy and Kurt Busiek, and artists Matt Haley, Chris Batista, Luke Ross, Dan Jurgens, and Ivan Reis). 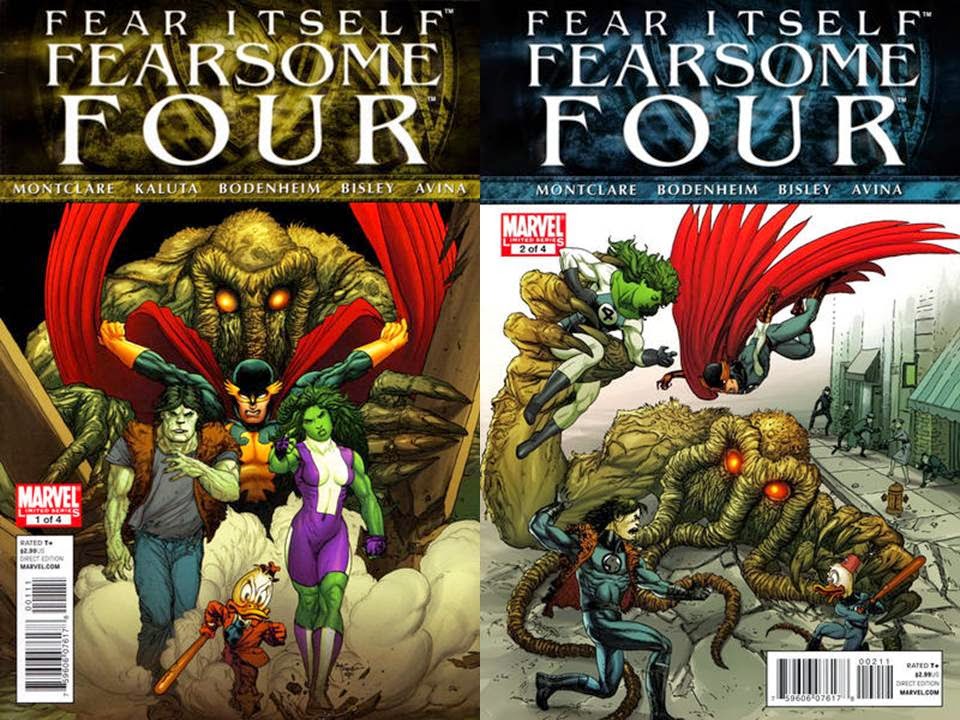 Nighthawk then worked with the Thunderbolts thanks to the machinations of the Grandmaster, gets involved in Marvel's Civil War, and ends up being one of the "last Defenders" (a six issue mini-series in 2008 by Keith Giffen, Joe Casey and Jim Muniz) with team members She-Hulk, Colossus, Blazing Skull, and later added Paladin, Junta, Atlas, Son of Satan as well as a new Nighthawk in Joaquin Pennysworth), facing off against the Sons of the Serpent, U-Man, Yandroth (and his Omegatron's constructs of the Squadron Sinister) and Krang (the later foe of the Sub-Mariner then joining the team!).  Kyle returns as Nighthawk with the Fearsome Four, in the 2011 four issue mini-series Fear Itself: Fearsome Four, along with team members She-Hulk, Frankenstein's Monster and Howard the Duck (!!) to stop enraged Man-Thing! 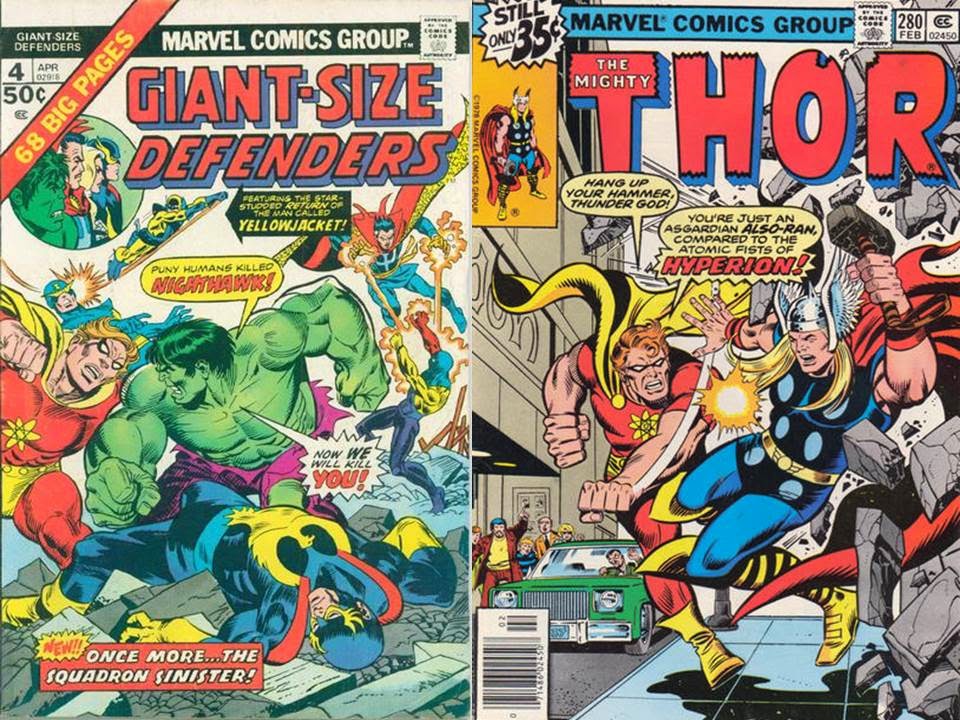 The last member of the Squadron Sinister was the oddest, as he was only a construct of the Grandmaster, given false memories of his life as Zhib-Ran, an alien explorer from the microscopic world of the first atom split by man...and finding himself the last survivor of his race, wanting to avenge himself on the inhabitants of Earth.

This Hyperion rejoined the Squadron Sinister for Defenders #13-#14, and again in Giant-Size Defenders #4, losing his memories thanks to Dr. Strange, then regaining them in Avengers Annual #8, before being used as a pawn by the alternate world scientist Master Menace (Emil Burbank) to fight his world's Hyperion (of the Squadron Supreme, the heroic other world group that inspired the Grandmaster to create the Squadron Sinister....who'd you think was the inspiration?) in Thor #280 by Don & Maggie Thompson, Roy Thomas, Wayne Boring and Tom Palmer. 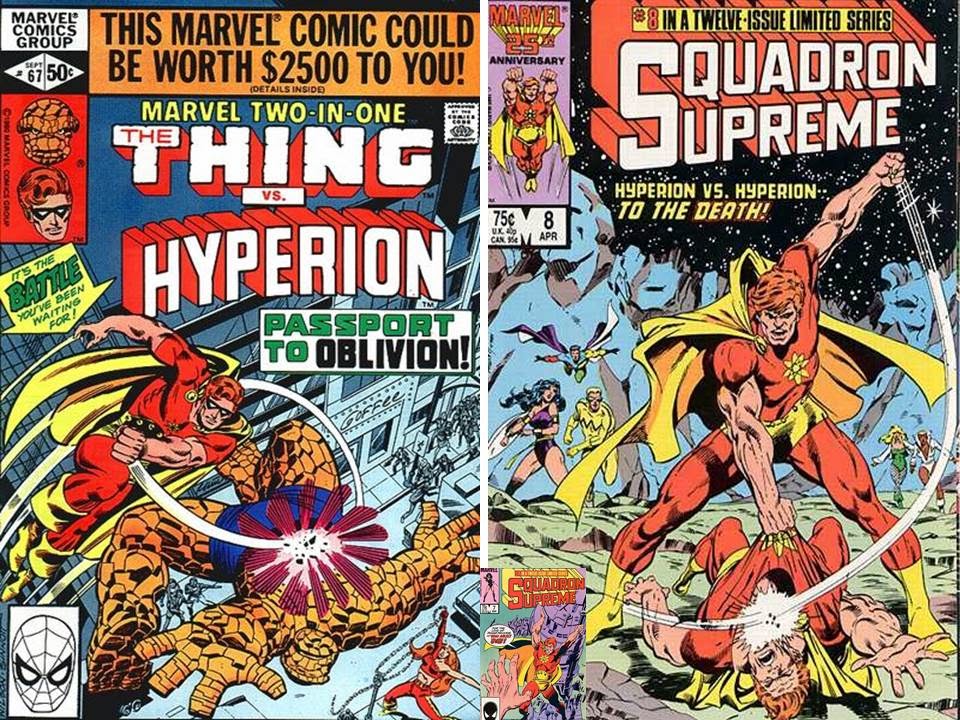 The Squadron Sinister's Hyperion was then contacted by the evil corporation, Roxxon, and tried to have him bring Thundra (an extra-dimensional amazon, formerly of the Frightful Four) to them, but she escaped to her own dimensional home, with him following (but not quite getting there in Marvel Two-In-One #67 in September, 1980 by Mark Gruenwald, Ralph Macchio and Ron Wilson).  Hyperion was found in interdimensional space by Master Menace, and brought to the Squadron Supreme's world, where he was used as a substitute for their missing Hyperion, and fell in love with Power Princess...at least until the original Hyperion returned and beat him to death (all in Squadron Supreme #7 and #8, March and April, 1986 by Mark Gruenwald, John Buscema and Bob Hall). 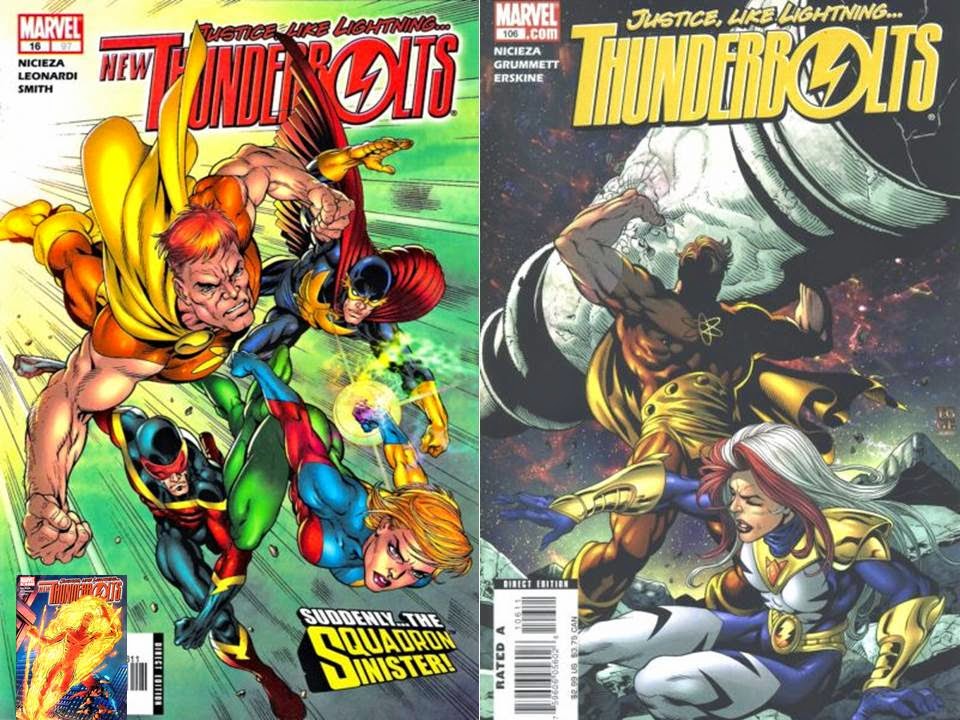 Yet, there was a Zhib-Ran, and he appeared first in New Thunderbolts #15 (January, 2006, by Fabian Niceza and Rick Leonardi), with all the otherworldly powers of the original...and he's been a member of the Squadron Sinister ever since.

Well, isn't that just super, man?
Posted by Dave's Not Here Comic Blog at 6:00 AM