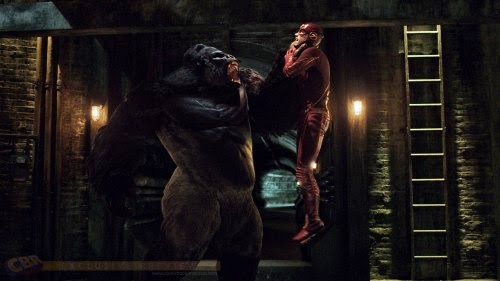 ....and he's been around for quite some time, as have a few of DC's other simians, just monkeying around. 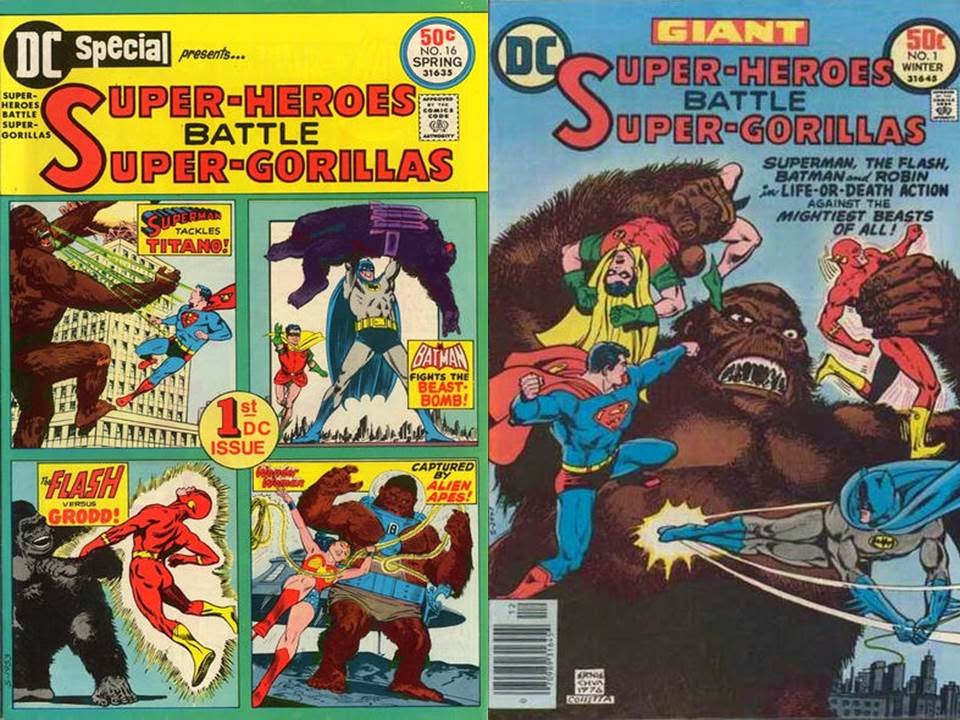 With the popularity of the Planet of the Apes (a movie that came out in the 1960s, not unlike the Batman TV Show, and a surge in its popularity with sequels and a TV show in the 1970s), DC took advantage and gathered a few of its gorillas themed stories in a couple of reprint books, first in DC Special #16 (Spring, 1975), and then in Super-Heroes Battle Super-Gorillas #1 (Winter, 1976). 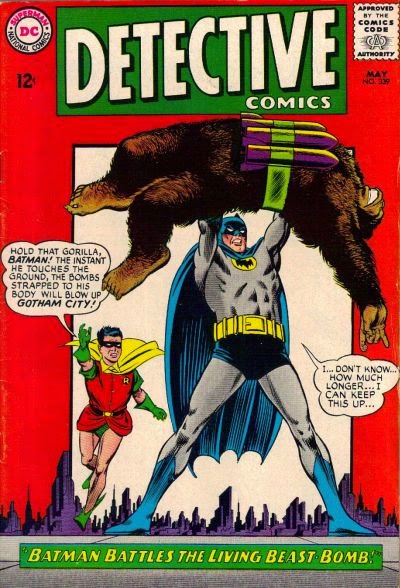 ...starting with Batman and Robin's battle with Karmak the Gorilla in "Batman Battles The Living Beast-Bomb!" by Gardner Fox and Carmine Infantino from Detective Comics #339 (May, 1965).


Well, at least it was Karmak's body, but it was possessed by the mind of criminal scientist Walter Hewitt, who the dynamic duo defeat, but Hewitt comes up with a plan involving a bomb to try to mind-switch with Batman, but Batman defeats his dastardly plans! 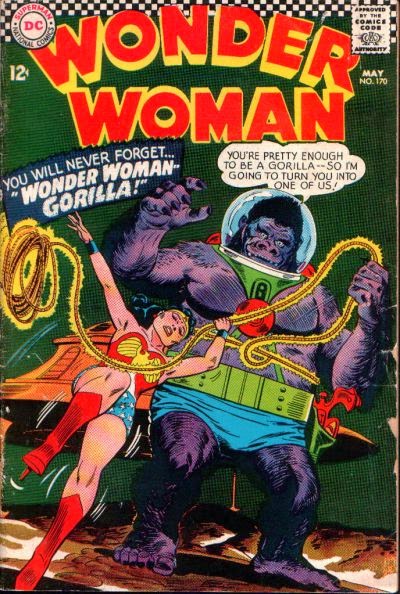 The second story is that of Wonder Woman and an alien threat to Paradise Island...

This story had Wonder Woman and her mother, Queen Hippolyta, facing off against invading aliens that had plans on taking over Paradise Island...and making Wonder Woman their queen!  That idea didn't work so well for the Amazing Amazon (especially after they changed her into a gorilla!!!), so she used powers and wit to defeat the aliens and send them packing. 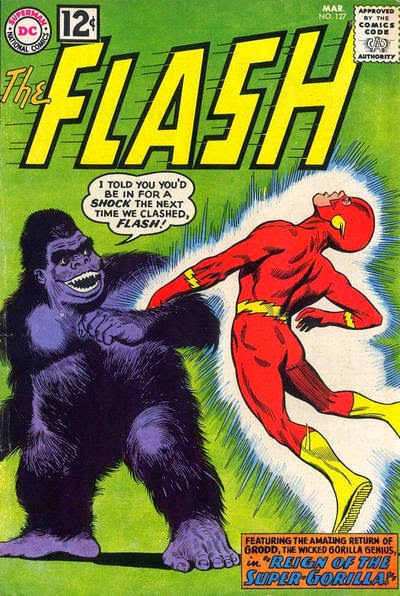 The third story in this issue of reprints is the one with Flash vs. his simian super-villain, the evil Gorilla Grodd!

Grodd had faced the Flash before, but Flash #127 (March, 1962) was his first appearance on a cover, in "The Reign of the Super-Gorilla" by John Broome and Carmine Infantino!

Grodd, disguised as human William Dawson, gets out of prison, then returns to Grodd form, heading to Gorilla City to plot revenge against the Flash.  Along the way, he falls in love with female gorilla, Boka, and exposes himself to a radiation that makes everyone like him, so much so that the Flash can't even fight him, and Grodd plans to run for governor.  Flash figures out the range of Grodd's new power, and how to make a monkey out of that gorilla! 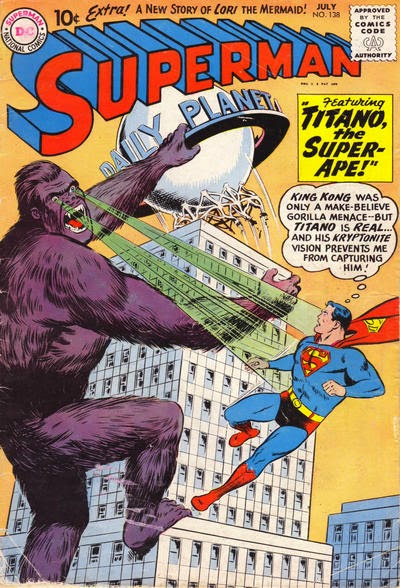 The last reprint in the DC Special is just super, as it features Superman, and his giant ape foe, the Titano, the giant ape with Kryptonite vision!

The story is "Titano, the Super-Ape!" from Superman #138 (July, 1960) by Otto Binder and Wayne Boring, and is Titano's second appearance (but don't worry, they recap his origin).

In this issue, Titano accidentally is returned from the past, takes Lois Lane hostage, and even tries climbing the Daily Planet building!  (Holy King Kong!).  The Man of Steel figures out a way to stop the big guy, and returns him to the past after freeing Lois! 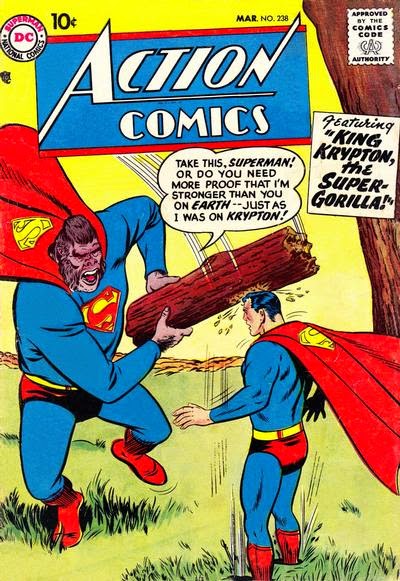 The second of DC's seventies collection of gorilla stories starts with a Superman story, but this time, the Man of Steel faces off against King Krypton!

Action Comics #238 (March, 1958) features the story of "The Super-Gorilla From Krypton" (that being, King Krypton) by Otto Binder and Wayne Boring.

Jimmy Olsen discovers King Krypton in Africa, and uses his signal watch to summon Superman, who sends Jimmy to look for Kryptonite to help defeat the ape.  Jimmy gets captured by an African tribe who have Kryptonite spearheads, which result in Superman and King Krypton to be captured as well, and the tribe has the two fight for freedom.  Superman eventually wins and learns that King Krypton was a devolved Kryptonian scientist, who then dies from exposure to Kryptonite. 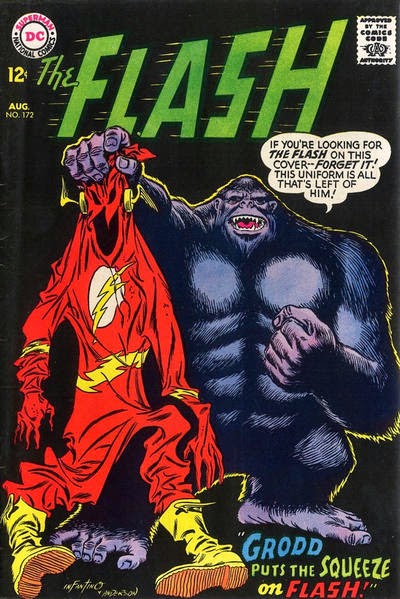 Grodd makes a return to face the Fastest Man Alive in the second story in this collection...

The scheming simian returns, so that "Grodd Puts The Squeeze On Flash" from Flash #172 (August, 1967) by John Broome and Carmine Infantino.

This tale has Flash dealing with a Central City enclosed under a dome, and its citizens all now possessing super speed!  Grodd takes credit for this, and blackmails the Flash into freeing him from his Gorilla City cell.  After freeing his foe, Flash finds out the real cause of the problem, and faces off against Grodd to return him to his prison. 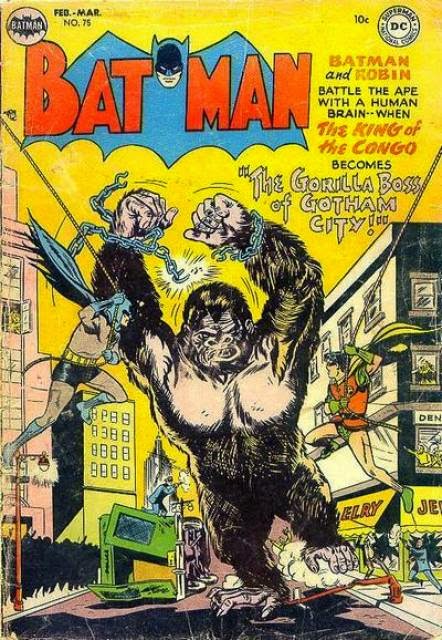 Last, but not least, Batman and Robin face off against a new type of crimelord, that of a gorilla!

In Batman #75 (February-March, 1953) with "The Gorilla Boss of Gotham City" by David Vern Reed and Lew Sayre Schwartz, Gotham sees crime boss George Dyke executed.  Dyke's body was taken by Doc Willard, a crazed scientist, who revives the crimelord and puts his brain into a gorilla's body!

The Gorilla Boss goes on a crime spree, but decides he doesn't want to live in a gorilla's body, but instead wants Batman's body.  Batman prevents this from happening, and the Gorilla Boss body gets crushed, with the Doc going mad in the process...(though that doesn't stop the Doc and Gorilla Boss from returning).

All in all, these stories will make you go ape and are great reading during baseball season!