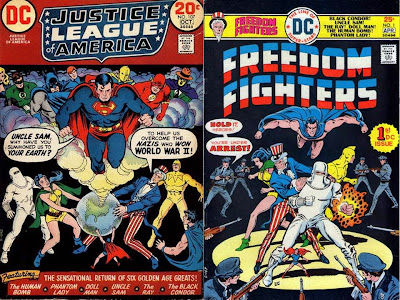 True, the team of the Freedom Fighters got their start in Justice League of America #107 and #108 (September-October and November-December, 1973) by Len Wein and Dick Dillin, and then a fifteen issue series that ran from March-April, 1976 to July-August, 1978...but the team started decades before that, in Quality Comics, and here's a quick look at those earlier appearances! 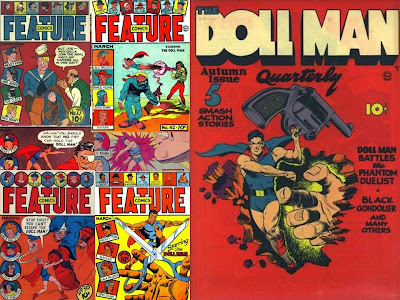 Darrell Dane was a scientist who developed a formula that allowed him to shrink in size...

...and he used this ability to save his girlfriend, Martha Roberts, taking on the identity of Doll Man, starting with Feature Comics #27 (December, 1939, by Samuel Maxwell Iger and Will Eisner).


Doll Man had many adventures over the years, remaining a feature in Feature Comics until Feature Comics #139 (October, 1939), as well as gaining his own book... 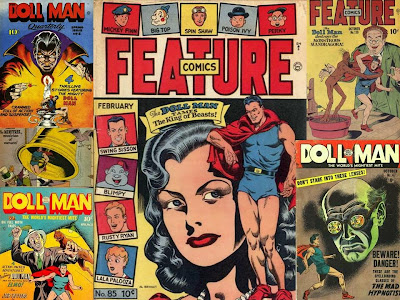 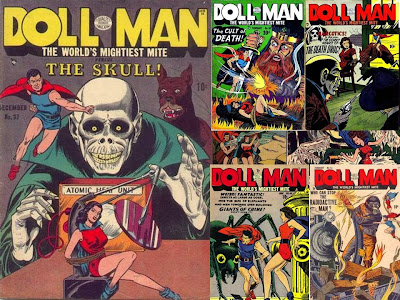 Among many foes, the biggest thing to happen to Doll Man was when Martha Roberts became Doll Girl in Doll Man #37 (December, 1951) during a battle with the Skull...

...where she replaced Elmo the Wonder Dog (who Doll Man first partnered up with in Doll Man #31, December, 1950),  as a regular helper in Doll Man. 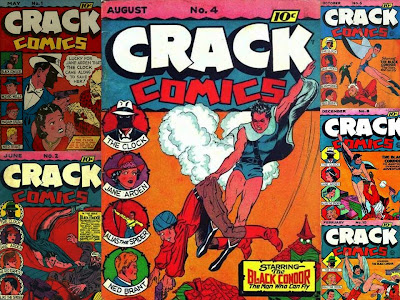 Richard Grey, Jr. was thrown into his heroics at birth, when his father and mother were killed soon after in Outer Mongolia and raised by the condors (where he learned to fly), eventually being taken in by missionary, Father Pierre, who is then also killed by raiders.  The young man uses his abilities to stop them, becoming the Black Condor, all in Crack Comics #1 (May, 1940, by Will Eisner and Lou Fine).  The Black Condor comes up with a paralyzing ray gun in his next appearance (in Crack Comics #2, June, 1940), and later, adopted the identity of Senator Thomas Wright (who died, and just happened to look exactly like the Black Condor) in order to vote in an important appropriations bill (in Crack Comics #11, March, 1941). 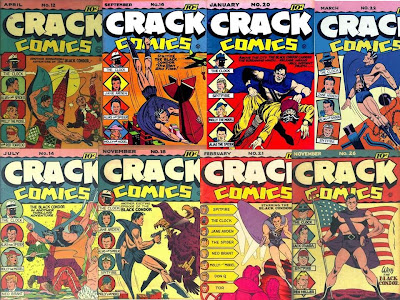 Even with the odd plots and turns, the Black Condor series lasted all the way to Crack Comics #31 (October, 1943), and along the way, he faced foes like Ali Kan, Ras Gyn, Sinh Fang, De Graf, the Sapphire King, the Master, Karlo Klug and his Kite-Men, the Great Yaho, Lung Woe and the Spinning Deaths, Monks Gallagher, the Sophisticated Lady, Senator Jasper Crow, Carl Stark, General Korn, Miranda, the Ghost-Gun Killer, the Hand, Mysto, Karle Kurt, Skull-Face, Draku and the Black Dragon Society, Senator Dan Bird and Fury the Eagle and Senator Joe Logan (and with all these Senators as foes, you'd think Black Condor was in Congress today!). 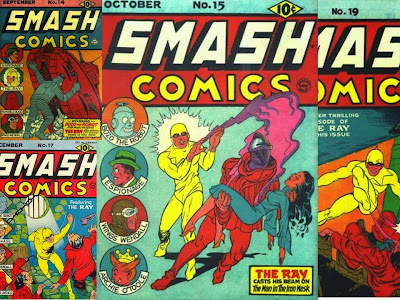 "Happy" Terrill was a reporter who joined Professor Styne on a balloon experiment that took them to the upper stratosphere, during which "Happy" was thrown from the blimp into a "cosmic storm", turning him into a being of light energy who can fly and project energy, leading "Happy" to become the Ray to save the Professor from spies in Smash Comics #14 (September, 1940, by Will Eisner and Lou Fine). 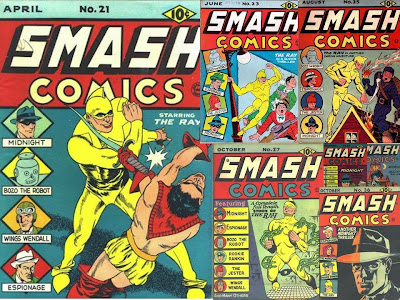 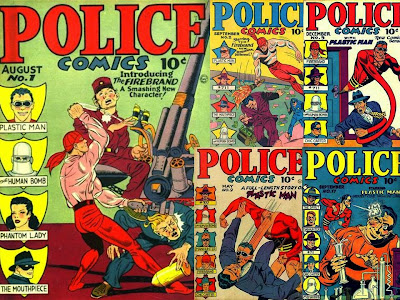 Roy Lincoln was the son of a scientist, and that chemist is the reason Roy became the Human Bomb, after Axis spies broke into the professor's lab, trying to take the explosive formula 27-ORX, which Roy swallowed, gaining the power of explosive fists (as well as a degree of invulnerability to things like bullets) all in Police Comics #1 (August, 1941, by Paul Gustavson). 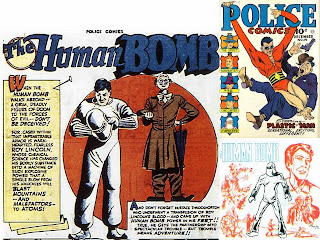 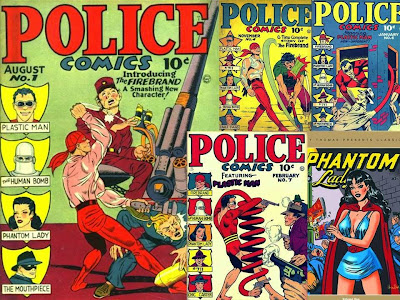 Sandra Knight was the daughter of Senator Henry Knight, and worked with Professor Abraham Davis to develop a black light ray projector in Police Comics #1 (August, 1941, by Arthur Peddy).  Sandra lost contact with the Professor when he was kidnapped, and saw the same men try to take her father, and sprung into action, stopping the thugs, who never got a good look at her, telling police they were stopped by a "phantom lady"...a name she kept.  Later stories had Sandra being related to the original Starman, who encouraged her to continue as Phantom Lady, and she perfected the black light ray projector, which then also allowed her to become invisible and the special glasses she wore which allowed her to see in the dark. 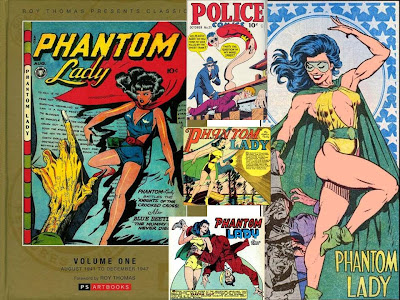 The Phantom Lady's run lasted until Police Comics #23 (October, 1943), and also included a crossover in Feature Comics #69, #70 and #71 (July, August and September, 1943) with the Spider Widow (Dianne Grayton) and the Raven (Tony Grey) who never became Freedom Fighters!  Villains she faced in her run included Tikoy, Captain Ortega, a phony Phantom Lady, the Bunny Man, and the Boss (the foe the three heroes faced).  Phantom Lady also never had covers during her original run, but did as she developed on her own (but, in stories outside her regular continuity, stories past Police Comics #23 weren't produced by Quality (and resulted in a color change in costume for Phantom Lady as well....) when the Phantom Lady returned to comics under Fox with Phantom Lady #13 (August, 1947) by Matt Baker. 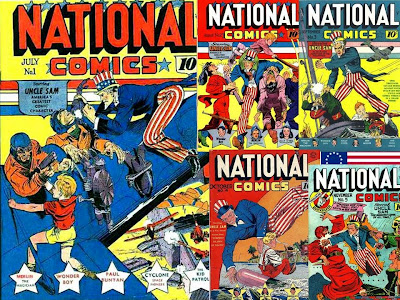 A national hero taking form in the comics with National Comics #1 (July, 1940, by Will Eisner and Dave Berg), and the man that eventually formed the Freedom Fighters, Uncle Sam!

Sam was a patriot, loyal to the United States during the Revolutionary War, and as he was dying to complete a mission for General George Washington, he had a vision of the "spirit of America", who joined with him, creating the hero known as Uncle Sam. 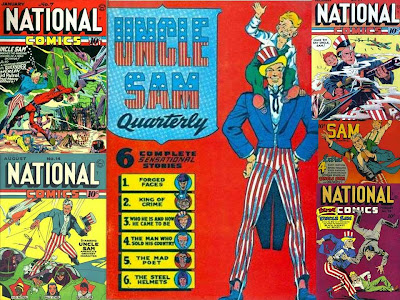 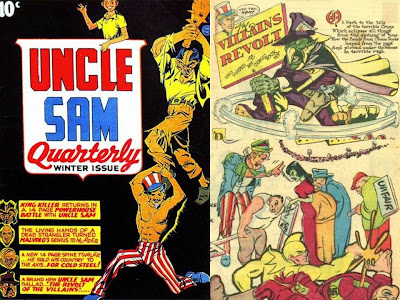 Uncle Sam even had the first major hint of a Quality hero crossover, with a prose story in Uncle Sam Quarterly #2 (Winter, 1941), with Uncle Sam convincing Quality's villains they have to go back to work to face Hercules, Neon, Quicksilver, the Ray and Black Condor, or they'd all be out of business!

Uncle Sam was the backbone of the Freedom Fighters and we salute you! 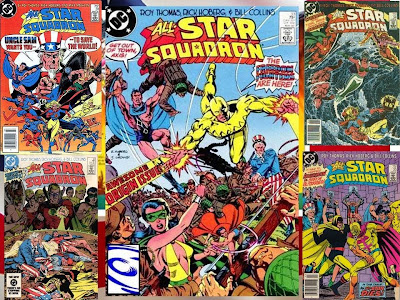 The founding of the Freedom Fighters didn't get covered until DC Comics took over the characters, and it was in All-Star Squadron #31-35 (March-July, 1984, by Roy Thomas and Rick Hoberg), and told how these (and other) Quality heroes (like Miss America, Magno and Neon the Unknown as well as DC hero and JSA founder, Hourman) had originally started on Earth-2, and left to help Earth-X, and unintentionally allowed the Nazis to win World War II! 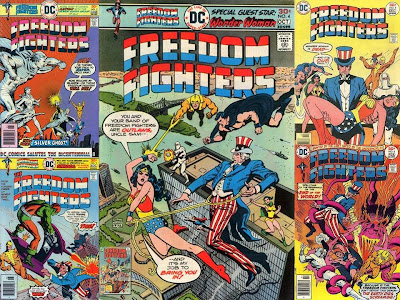 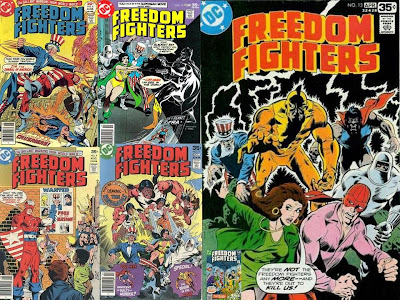 These issues had the team leaving their Earth-X, coming to Earth-1 and being thought of as villains, thanks to the Silver Ghost, and facing foes like King Samson, Skragg the Super Sniper, the Crusaders, Cat-Man, and the Renegades, as well as heroes like Wonder Woman, Batgirl and Batwoman, and having old Quality hero Firebrand (Rod Reilly, who appeared in the first 13 issues of Police Comics, even taking most of the covers from Plastic Man) join the team in Freedom Fighters #12 (January-February, 1978). 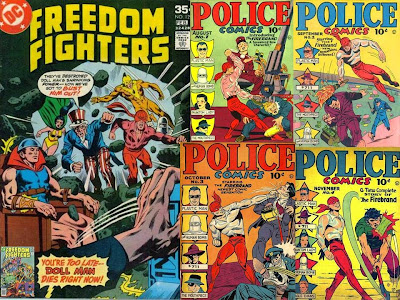 Rod Reilly premiered in  in Police Comics #1 (August, 1941, by Samuel Maxwell Iger and Reed Crandell), and he was the son of a wealthy steel tycoon, but wanted more from his life, working with ex-boxer Slugger Dunn to become the crime fighter known as Firebrand!

Firebrand fought criminals and spies like Baron Von Hanson, General Alfredo Muerte, Boss Slaine, Dr. Kruger and the White Gardenias, before ending his short run in Police Comics with issue #13 (November, 1942), all happening before Pearl Harbor (as explained in the early issues of All-Star Squadron).

But back to the Freedom Fighters!

After the 15 issues of the Freedom Fighters, and a few other appearances like DC Comics Presents #62 (October, 1983) and Wonder Woman #292 (June, 1982), the original Freedom Fighters fought their last battle with the Crisis on Infinite Earths, with later revivals focusing on new versions of the Quality characters. 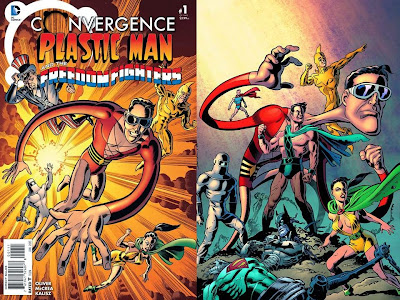