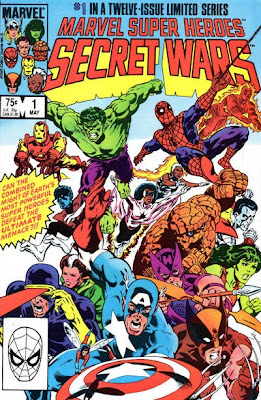 "Can the combined might of Earth's most powerful heroes defeat the ultimate menace?"

That was the question asked on the cover of Marvel Super Heroes Secret Wars #1 from May 1984 by Jim Shooter and Michael Zeck in the start of a twelve issue mini-series that would forever change Marvel Comics.... 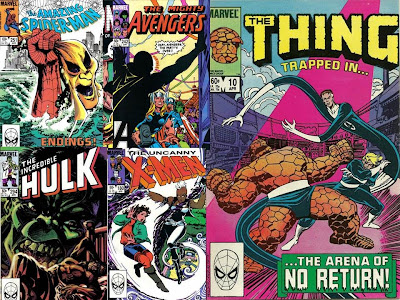 With the first issue (leading out from events of April, 1984's Amazing Spider-Man #251, Avengers #242, Captain America #292, Fantastic Four #264, Incredible Hulk #294, Iron Man #181, The Thing #10 and Uncanny X-Men #180), a representation of Earth's heroes found themselves on a satellite, listening to the Beyonder (an alien with supreme powers that had been observing the Earth for a time, and now brought a group to this place)....in order to form a Battleworld in which the opposing forces of good and evil would meet and determine which was more powerful. 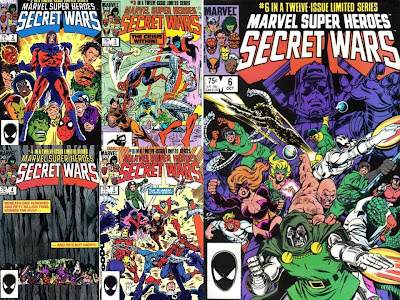 The members of the Fantastic Four were the Thing, the Human Torch and Mr. Fantastic, the members of the Avengers were Captain America, Iron Man (James Rhodes, as Tony Stark had been having problems at the time), Thor, Wasp, Hawkeye, She-Hulk, Captain Marvel (Monica Rambeau, a lady with energy powers who had just recently joined the Avengers), and the X-Men (Professor X, Cyclops, Wolverine, Storm, Nightcrawler, Colossus and Rouge, with Spider-Man and the Hulk as single heroes...all set to battle against villains Dr. Doom, Magneto, Galactus, Dr. Octopus, Enchantress, Kang, the Lizard, Absorbing Man, the Wrecker and his Wrecking Crew (Thunderball, Piledriver, and Bulldozer), Ultron, Klaw and the Molecule Man. 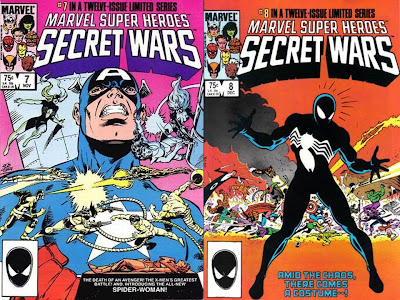 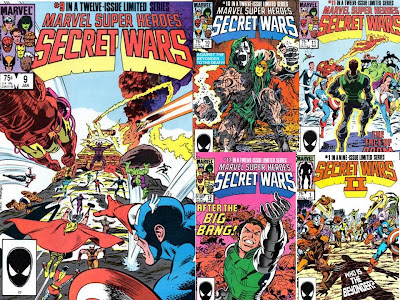 The heroes and villains found other cities that the Beyonder had taken and combined to form his Battleworld (where the people they encountered came from), and all the while, Galactus planned to feed...and Dr. Doom schemed to come out on top of everyone.  Won't say how it all ended with Marvel Super Heroes Secret Wars #12 in April, 1985, but as we saw all the heroes return (more or less, other than the Thing, who stayed on the Battleworld for a time), but as there was still titles published at Marvel Comics (with changed heroes dealing what happened to themselves during the year long mini-series), the ending wasn't much of a spoiler to regular readers (and then there was another Secret Wars, Secret Wars II from July, 1985 to March, 1986 that brought the Beyonder to Earth, and directly crossed over with the Marvel titles of the time). 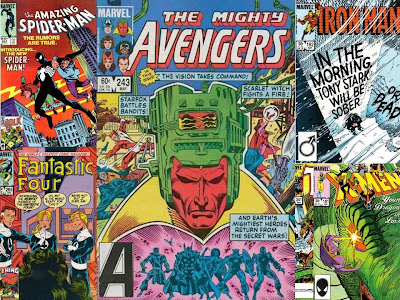 The change brought about by Marvel Super-Heroes Secret Wars involved an armor upgrade for Iron Man, a busted leg and badder attitude for the Hulk, roster changes for the Fantastic Four and the Avengers (as well as an eventual expansion of the Avengers, with Vision adding a west coast team), new costumes for the X-Men (and a new understanding of Magneto for a time), and the alien symbiote that would become Venom to menace Spider-Man (all mostly in their May, 1984 titles like Amazing Spider-Man #252, Avengers #243, Captain America #293, Fantastic Four #265, Incredible Hulk #295, Iron Man #182, The Thing #11 and Uncanny X-Men #181, and taking place between the pages of Thor #341). 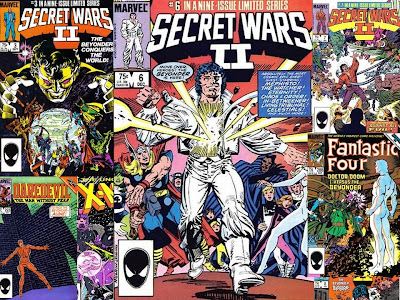 But the biggest change of all was the loss of freedom that individual comics had to tell a story all their own, and a firmer editorial control and over-dependance of crossovers to drive sales of comics...taking away some of the innocence of those titles, as well as the ability to follow one comic by itself for any length of time.  This, going back to that battle of good vs. evil, and showing sadly that, in the end, it is greed and power that seems to win out, instead of the creative good.