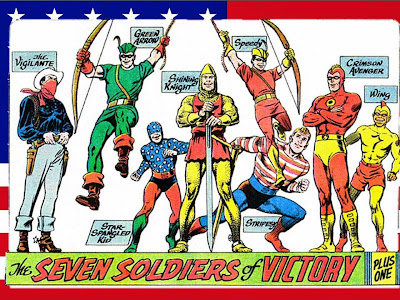 It wasn't that far from Robin Hood and his merry men.  A group of ordinary men gathered together to stop crime, including an archer, a man with a gun, someone with a star, and a sword...except it wasn't any ordinary crime, and these weren't quite ordinary men.  They were soldiers in the war against crime, leading us to victory...but, they also didn't know how to count, these Law's Legionnaires...otherwise known as the Seven Soldiers of Victory. 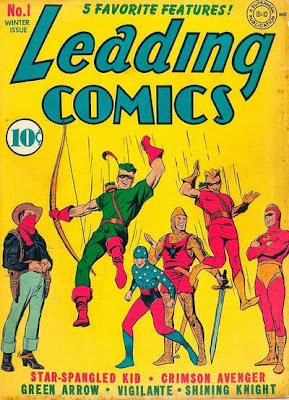 ...there were eight members!


Let's count them off and get to know the men that made this great super-team of the 1940s... 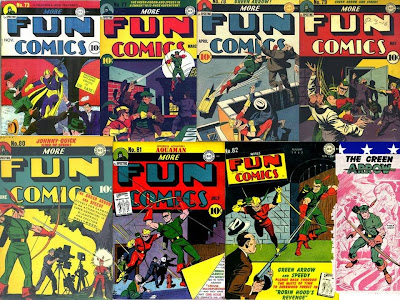 Green Arrow (Oliver Queen), the battling bowman and his partner Speedy (Roy Harper), who first appeared in More Fun Comics #73, November, 1941 by Mort Weisinger and George Papp.
These two probably were the most visible of the Seven Soldiers during the Golden Age, appearing on early covers of More Fun Comics (though not his first one), as well as one World's Finest Comics... 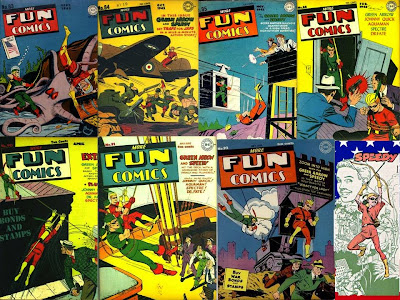 ...but even then, it wasn't for all of their appearances in More Fun Comics (they went from #73 to More Fun Comics #107 in January-February, 1946, where they then moved over to Adventure Comics starting with Adventure Comics #103, which was headlined by Superboy, as well as a feature in World's Finest Comics starting with issue World's Finest Comics #7 in Fall, 1942. 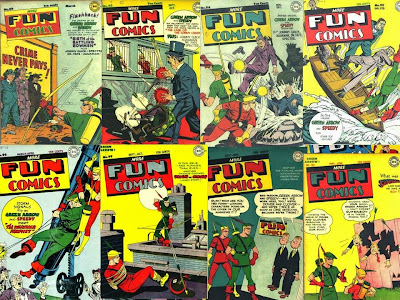 The end of the runs of Green Arrow and Speedy get a little odd, as though the feature was continuous, the universe changed around the character, adding a slight bit of confusion as to when the Earth-1 (Justice League of America) version of Green Arrow started....and when the Earth-2 (Seven Soldiers of Victory) ended.... 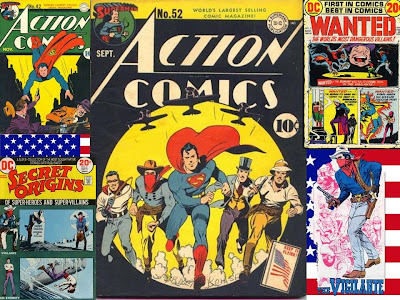 The Vigilante (Greg Saunders), the law of the old west, from Action Comics #42, November, 1941 by Mort Weisinger and Mort Meskin.  The prairie troubadour was an old style hero in modern times.  During the course of his run in Action Comics from issue #42 to Action Comics #198 (November, 1954), as well as the first four issues of Western Comics, working with two partners over the years, old western cowboy Billy Gunn (who started with the Vigilante in Action Comics #43, December, 1941), and then Stuff the Chinatown Kid (who appeared first in Action Comics #45, February, 1942), and facing foes like the Shade and the Fiddler (same name but no known relation to two Flash foes of the time), the Dummy, the Head, and the Rainbow Man. 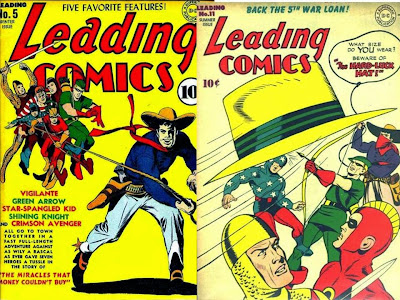 Sadly, this cowboy masked man didn't get too many cover appearances during the Golden Age besides Leading Comics...

...only landing Action Comics #52 (September, 1952) along with the Americommando, Zatara, Congo Bill, and action super-star, Superman! 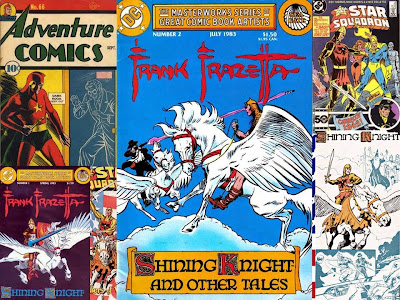 The Shining Knight (Sir Justin), came from Camelot to fight the forces of evil in the 1940s starting with Adventure Comics #66, September, 1941 by Henry Perkins and Craig Flessel.  With his trusty steed, Winged Victory, Sir Justin was freed from the ice by Dr. Moresby and battled evil in any era!  The Shining Knight did well with his magic sword and armor, and even picked up a squire in the modern age, Butch Boyle, whom he called Sir Butch, and the two even travelled back in time to Camelot to aid Merlin and King Arthur.  Shining Knight also faced foes like the giant Blunderbore, the Red Dragon, crimelord Savarr, the Black Baron, the Black Queen, and evil mage Archimago. 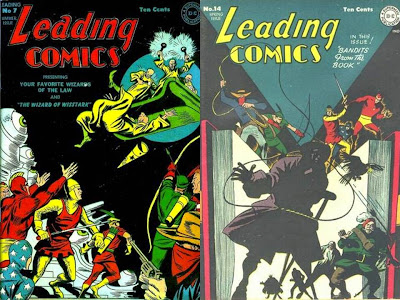 The Shining Knight's adventures in Adventure Comics continued until Adventure Comics #166 (July, 1951), but other than Leading Comics, Sir Justin didn't make it onto any covers in the Golden Age (as the covers were filled with Starman and Sandman, whom Justin worked with in the All-Star Squadron, as well as Superboy), only making Masterworks Series of Great Comic Book Artists #1 and #2 (reprinting Frank Frazetta drawn tales of the Shining Knight) in 1983!

The Star Spangled Kid and Stripsey 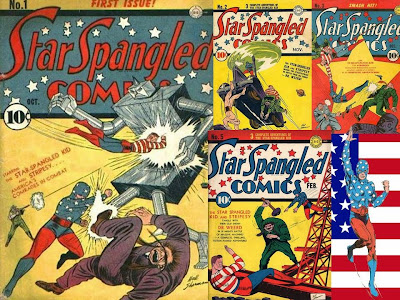 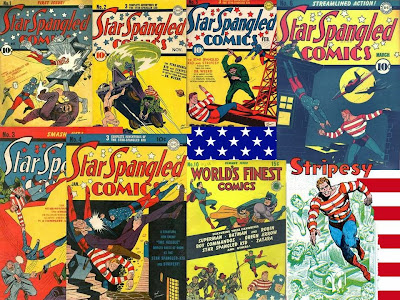 The Crimson Avenger and Wing 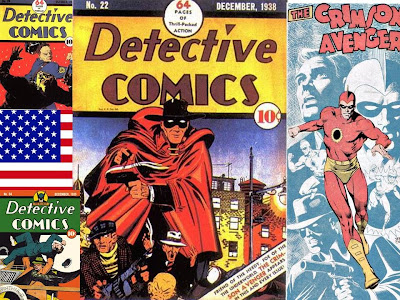 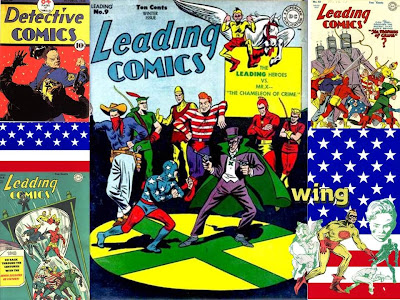 The Crimson Avenger and Wing even predated Batman, who quickly took over the covers of Detective Comics after he premiered, thus regulating Crimson Avenger and Wing to background status (and, other than Leading Comics, his new look never made it onto a cover!).  The pair were more pulp heroes to start (not unlike Green Hornet and Kato), and didn't quite make the transfer over to super-heroics...with the Crimson Avenger appearing World's Best Comics #1 (Spring, 1941), World's Finest Comics #2 through #5 (to be replaced by the Star-Spangled Kid!), and not even keeping his own feature running while the Seven Soldiers were active...with the last solo Crimson Avenger story happening in Detective Comics #89 (July, 1944), and the Seven Soldiers bowing out with Leading Comics #14 (Spring, 1945). 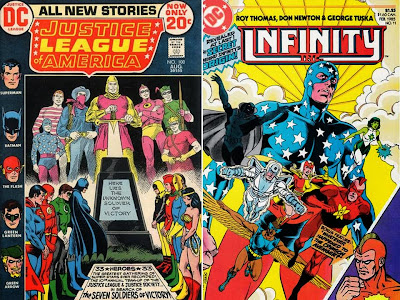 The Seven Soldiers did return, coming straight out of the 1950s into a JLA/JSA Crisis with Justice League of America #100 to #102, and the team appeared a little in Infinity, Inc. (which had the Star-Spangled Kid as it's leader, just before he turned himself into Skyman) before the Crisis on Infinite Earths....

...this caused a lot of confusion, as Green Arrow and Speedy couldn't be considered members, so it became quite a mystery for a time as to who the 7th (and 8th) Soldier were for a time (and come back as we'll go into that at a later date).... 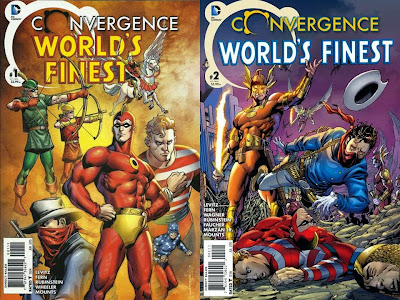 ...but that original team is back for Convergence: World's Finest #1 and #2 (June and July, 2015) by Paul Levitz and Jim Fern....and we all couldn't be happier to see this team again, especially since they brought Scribbly and the original Red Tornado with them, and proving that old heroes can still fight new menaces!