A History of Crisis on Earth-X 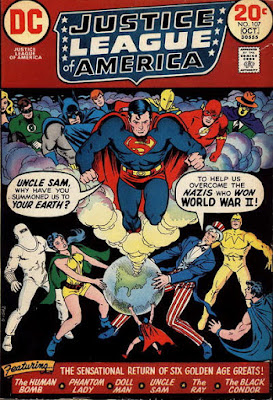 Earth-X....the nastiest of alternate Earths, one where the Nazis had won World War II, was introduced in Justice League of America #107 (September-October, 1973) by Len Wein, Dick Dillin and Dick Giordano (under a cover by Nick Cardy) with "Crisis On Earth-X"...


...in a story which also reintroduced the 1940s Quality heroes of Uncle Sam, Doll Man, Phantom Lady, Human Bomb, Black Condor and the Ray as the Freedom Fighters...

...the last of the heroes on that world, who were still fighting the Nazi menace. 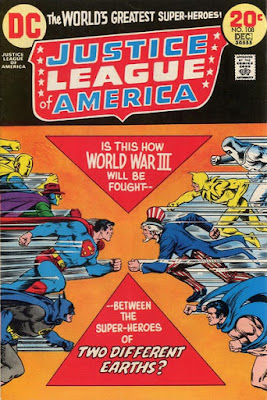 The battle continued into the next issue (Justice League of America #108 of November-December, 1973 by Wein, Dillin and Giordano, entitled "Thirteen Against The Earth")...

....where, with the help of the Justice League of America (Batman, Green Arrow, Elongated Man and Red Tornado) and Justice Society of America (the Golden Age Superman, Sandman and Dr. Fate), the Freedom Fighters were finally able to live up to their name.

The combined heroes were able to free Earth-X from the Nazi forces, and the computer that led them under the image of Adolf Hitler (all by breaking the system that allowed the evil forces to mind control most of the population into following all the Nazis lies). 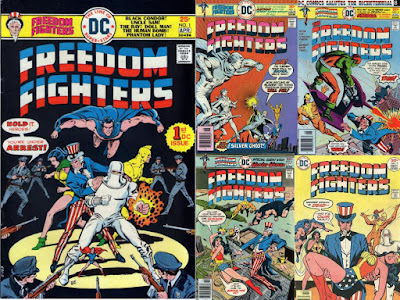 The Freedom Fighters then had their own comic series, which lasted 15 issues from March-April, 1976 to July-August, 1978.  Oddly, the heroes, instead of remaining on Earth-X, to help in rebuilding that devastated world, came to Earth-1 (the home of the Justice League of America), where they were falsely accused of being criminals by a corrupt government and cooperating media, and spent much of their time on the run. 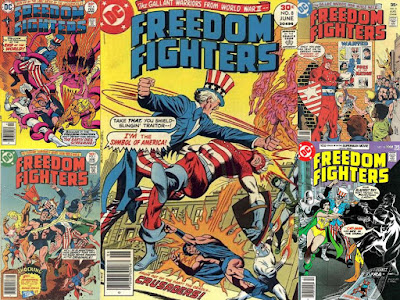 Along the way, the Freedom Fighters met up with heroes like Wonder Woman, Batgirl and Batwoman (real heroes knowing the heroic nature of the Fighters), as well as established DC villains like Cat-Man, and even faced a few foes all their own, such as the Silver Ghost, King Samson, Skragg the super-sniper, the Crusaders (invading super-heroes Americommando and his partner Rusty, Fireball and his partner Sparky and the aquatic Barracuda), the Renegades, as well as some unnamed aliens. 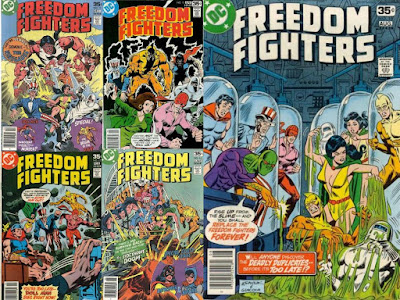 Still, they couldn't escape their past, as the Nazi menace of Earth-X had been resurfacing, as the first Firebrand (Rod Reilly), who was came from Earth-X in Freedom Fighters #11 (November-December, 1977, by Bob Rozakis, Dick Ayers and Jack Abel), came to tell them, as the Silver Ghost, who was eventually revealed to be an Earth-X Nazi, was also recruiting the Secret Society of Super-Villains (who were part of a multiversal attack on heroes, at the time having a group attacking the heroes of the Justice Society on Earth-2). 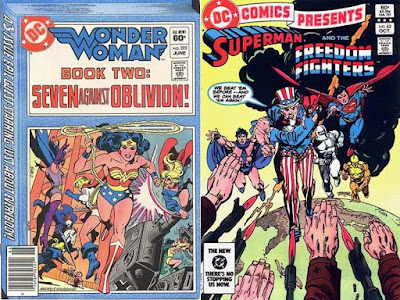 At some point after the end of the Freedom Fighters and Secret Society of Super-Villains titles of the 1970s, the Freedom Fighters went back to Earth-X to stay....but Earth-X popped up twice, once in Wonder Woman #292 (June, 1982) with Phantom Lady helping Wonder Woman against the threat of the Adjucator, who menaced the multiverse, one Earth at a time, and the rest of the Freedom Fighters getting help from a resurgence of Nazism on Earth-X with the help of Earth-1's Superman in DC Comics Presents #62 (October, 1983), before the collapse of the multiverse during the Crisis On Infinite Earths (which also revisited Earth-X, among others, starting with its fifth issue). 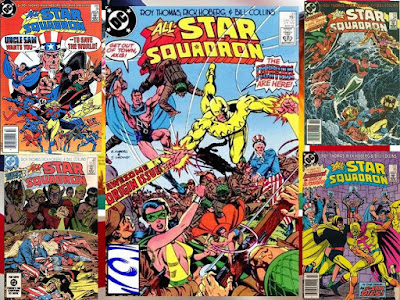 The beginnings of the Freedom Fighters were explored in All-Star Squadron #31 to #35 (March to July, 1984 by Roy Thomas and Rick Hoberg), with Uncle Sam leading lesser known Quality heroes like Miss America, the Invisible Hood, Magno, and the Red Torpedo, along with former JSAer, Hourman, to stopping the Japanese from attacking Pearl Harbor on Earth-X, which allowed the Nazis to win World War II later, as the United States held off participating until directly attacked in 1942 (which this series was set in).

The Ray, Black Condor and Uncle Sam stayed on Earth-X to continue the fight, with the rest of the Quality heroes (including folks like the Jester, Quicksilver, Midnight, the Spider, the original Firebrand, Manhunter Dan Richards and more) to come from Earth-2 to Earth-X during the Crisis On Infinite Earths (as revealed in All-Star Squadron #50 of October, 1985). 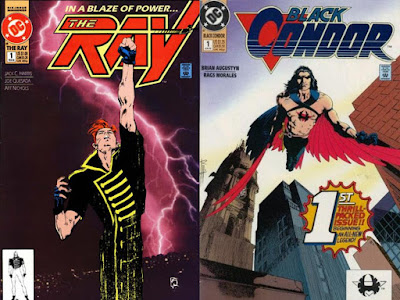 The Ray, Black Condor and Phantom Lady were reintroduced to the DC Universe in the Ray #1 (February, 1992), Black Condor #1 (June, 1992) and Action Comics Weekly #636 (January 24, 1989) as Ray Terrill (son of Happy Terrill), Ryan Kendall, and Dee Tyler (student of Sandra Knight), with these kids eventually uniting with Uncle Sam, the Human Bomb and others to form a new Freedom Fighters, which were devastated in the opening of the Infinite Crisis by a Secret Society which included Deathstroke the Terminator, the second Psycho-Pirate, Zoom and Black Adam.  This seven issue mini-series also returned the multiple Earths with new twists, followed up on in Final Crisis, Forever Evil and Multiversity.... 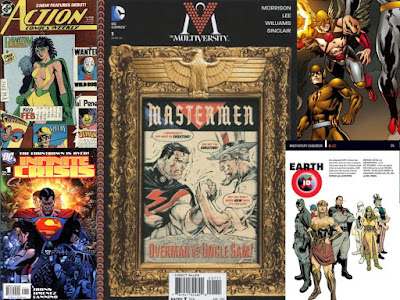 .....including a new Earth-X, with evil Nazi equivalents of familiar heroes to fight Freedom Fighters (as opposed to the evil versions of Earth's heroes represented by the Crime Syndicate of America of Earth-3).   Still, evil is evil, and there will always be Quality heroes ready to fight for freedom..

Posted by Dave's Not Here Comic Blog at 5:01 AM