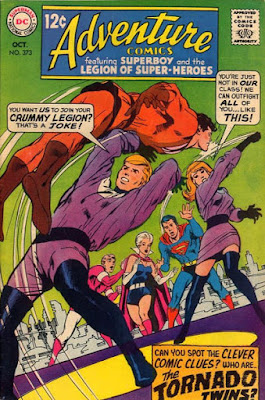 Jumping a head a little bit...to the 30th Century, the home of the Legion of Super-Heroes, a group of young interplanetary heroes who uses their alien powers to protect the universe (with the help of Superboy, Superman when he was a boy)...in Adventure Comics #373 (October, 1968) they met "The Tornado Twins" in a story by Jim Shooter and Win Mortimer, with a cover by Neal Adams.


The twins were Don and Dawn, who used their powers to beat up on the Legion members, and their abilities seemed oddly familiar.


So, the twins were Don and Dawn Allen, the descendants of Barry Allen (the Flash), using a special formula to duplicate Barry's powers for a day to celebrate the Flash.

Now, they appeared rarely after this, showing up for Bouncing Boy/Duo Damsel's wedding in Superboy #200 (January-February, 1974) and Legion of Super-Heroes Annual #1 (October, 1985), but.... 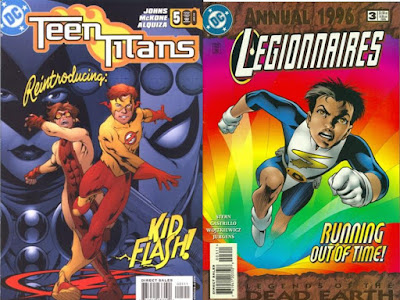 ...it was the son of Don (Bart Allen, who became Impulse, then Kid Flash and even Flash for a bit, who first appeared in Flash #91 of June, 1994 and joined the Titans and Young Justice) and daughter of Dawn (Jenni Ognats, who became XS, who first appeared in Legionnaires #0 of October, 1994, who joined the Legion of Super-Heroes), after the Crisis On Infinite Earths, soon after which, it was revealed Don and Dawn were Barry and Iris Allen's kids.

So, all these heroes were born on a fast track!