Thor Versus Sandman By Jack Kirby 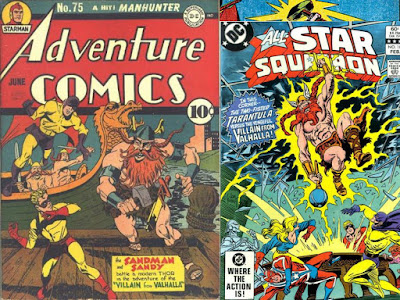 You'd be right in thinking that Jack Kirby was half of the team that created Thor..

...but long before the mythic Asgardian took his first journey into mystery, Thor appeared in Adventure Comics #75 (June, 1942) in a story by Joe Simon and Jack Kirby!


The Villain From Valhalla 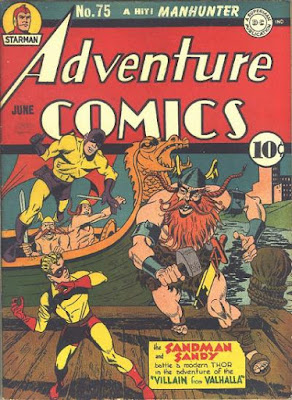 Thor first appeared in Adventure Comics #75 (June, 1942) by Joe Simon and Jack Kirby, but he was no Asgardian.  This Thor was really Fairy Tales Fenton, a big thug, who used transparent armor and an electrical device for him and his gang to impersonate Thor and his vikings, allowing them to confuse police and make their robberies easier.  Sandman and Sandy the Golden Boy encountered them, with Sandy getting injured in their first fight, but Sandman kept going, finding his foe and delivering him to the justice he deserved. 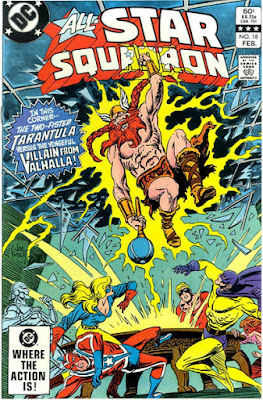 Fate had not finished with Fairy Tales Fenton yet, as he returned under a Joe Kubert cover in All-Star Squadron #18 (February, 1983) by Roy Thomas, Adrian Gonzales and Rick Hoberg, this time with the real hammer of Thor, attacking the All-Star Squadron while they were meeting to discuss the missing Justice Society of America.  The team also deals with a new member, the Tarantula, who has a costume similar to that of Sandman (Wes Dodds), who had given up his trenchcoat and gas mask look a while ago, and gained a new partner in Sandy the Golden Boy to replace Dian Belmont.  This story fills in what happened (though Dian's fate later proved to be wrong, so this retroactive continuity had more added to it later, as well as fixing a hole in the past), and set up for an epic battle of the All-Star Squadron and the Ultra-Humanite, which also featured the debut of Infinity, Inc.

This tale was reprinted in black and white in Showcase Presents: All-Star Squadron #1 from 2012.
Posted by Dave's Not Here Comic Blog at 4:53 AM