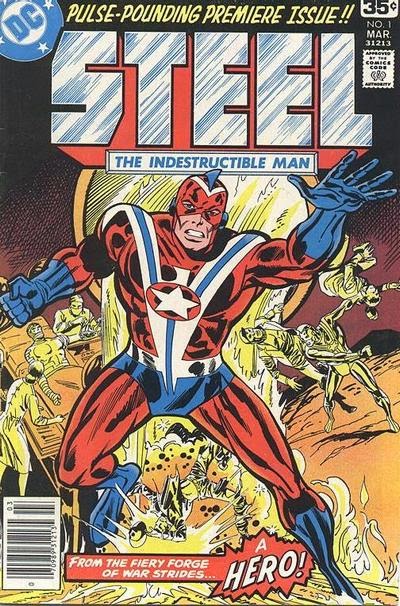 “The lights are going out…and a great darkness is descending on the world.  America will soon be the last bastion of freedom.  That’s why I’ll go on fighting the forces of fascist tyranny until the day I die!  That’s why I became Steel!”  – Hank Heywood.

That’s the mission statement of the hero who premiered in Steel, the Indestructible Man #1 (March, 1978, by writer Gerry Conway and artist Don Heck).  Hank Heywood was just a Princeton biology student, on tour in Europe in 1939 with his mentor, Dr. Gilbert Giles, discussing their bio-retardant formula that would allow surgical replacement of damaged limbs and organs….and the pair were witness to Nazi brutality.  This so shook young Hank, that after returning home, he informed his fiance, Gloria Giles (the doctor’s daughter) of his need to enlist in the Marines and help convince America to prepare to fight the coming war in Europe.  While training, Private Heywood stumbled onto some Nazi saboteurs, and while he tried to stop them, they blew themselves up and severely injured Hank. 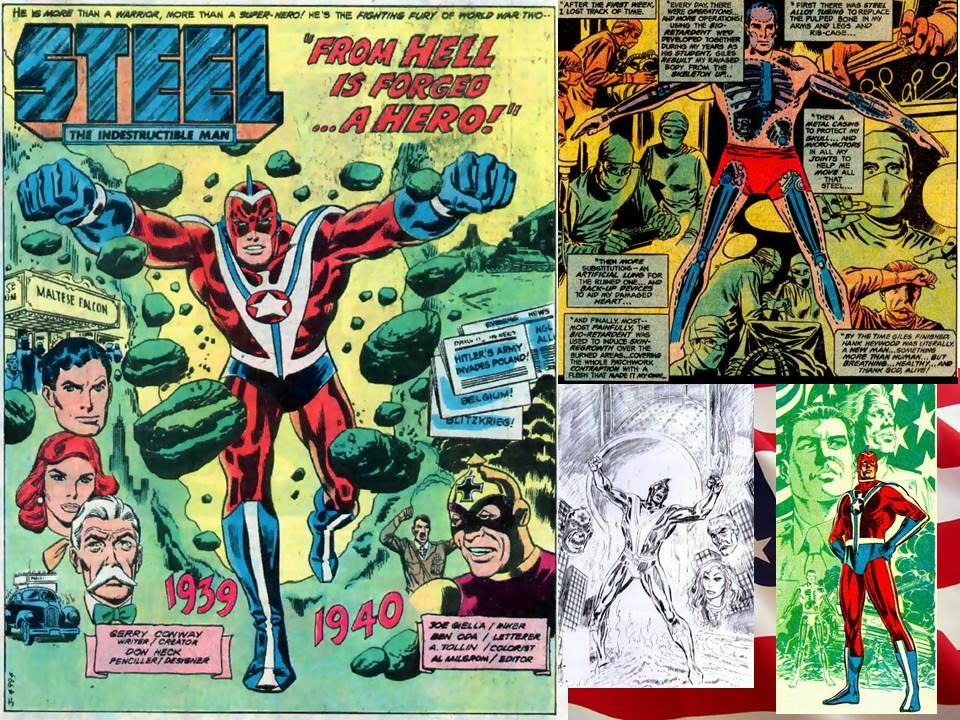 When Hank awoke, he convinced Dr. Giles to use the formula, in combination with steel alloy tubing to replace his crushed bones, micro-motors in his damaged joints and a new artificial lung to replace his burned one, all under regrown skin thanks to the formula.  The doctor wanted to keep the success of the operation a secret and Hank agreed, being rebuilt better than before, and didn’t tell Gloria.  Private Heywood was reassigned duty in the Marines as a desk jockey, but Hank wanted to do more for his country.  Hank fashioned a flexible steel alloy suit for added protection, and labeled himself Steel, the Indestructible Man.  With his new strength, speed, endurance and toughness, he then decided to arm himself (sadly, breaking the law to get advanced weapons from the Westchester Federal Armory), where Steel faced more saboteurs directed by Baron Death…but, this time, Hank, in his costume identity was victorious against them. 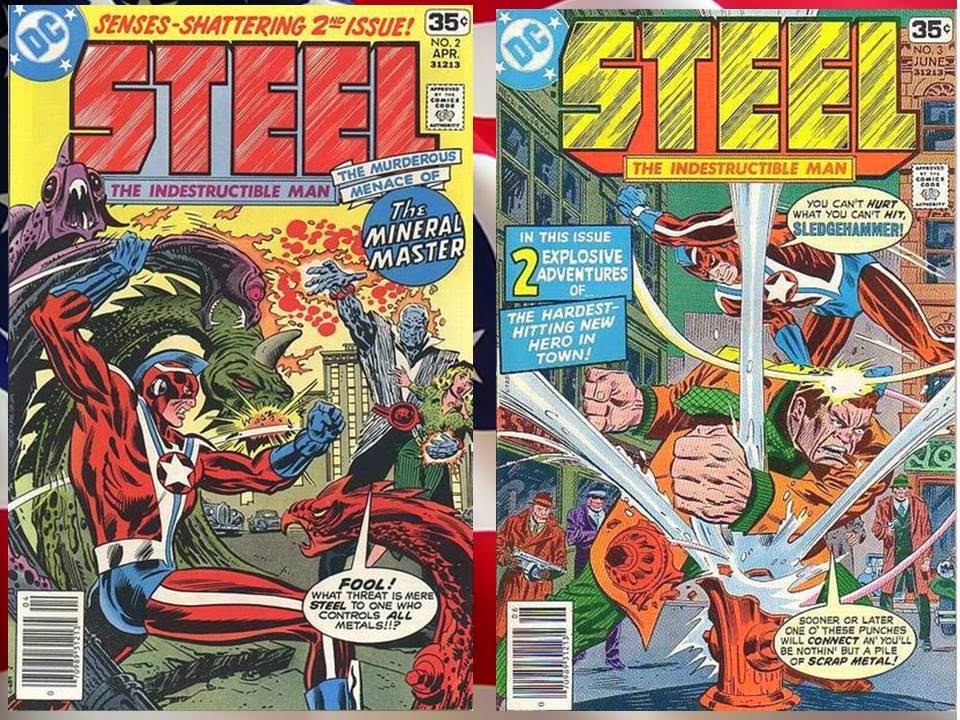 Over his next four issues, Steel faced the Mineral Master (a Dr. Moag, who stumbled onto the “Omega” field, which he was immersed in, and changed the doctor, and allowed him a mastery of minerals), Sledgehammer (Emil Sledgeski, a Chicago mobster with half-ton hands that allowed him to toss Steel around), the Gadgeteer (Col. Roger Romaine, an army engineer who thought the army needed more inventions but struck out on his own as a thief and fought Steel with an ultra-sonic stunner, a prototype laser, and an auto gyro), and the Marsh Monster (and his brother, hiding out in the swamp with a few deadly secrets with the Hawk brothers).

Steel fought these menaces with a modified flare gun (his flash gun, to blind his foes), an anesthetic dart rifle (which fired mercy bullets to stun his foes) and a modified mountain climbing pike to allow him to cross long distances (by grappling between buildings)…all with his other enhanced abilities, to keep fighting for his country. 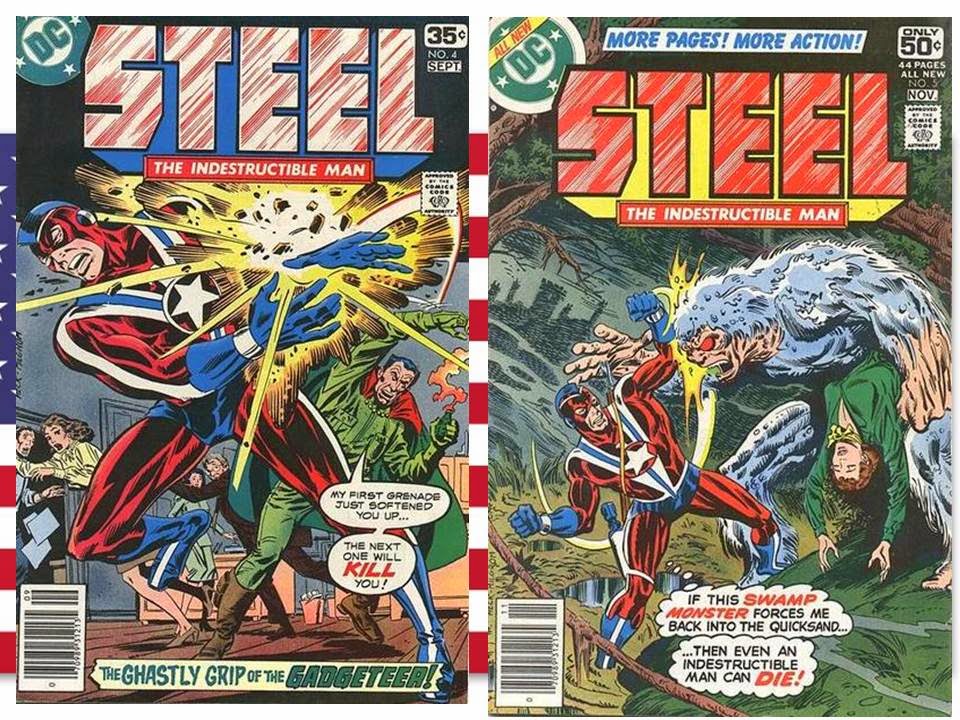 It wasn’t easy for Hank, as Dr. Giles collapsed from a heart attack (brought on by stress, and the realization that Hank had gone against the doctor’s wishes becoming Steel), and Gloria grew more distant from Hank as his fervor to fight the forces aligning against America grew.  Though, with the last published issue, (#5), Steel had retrieved more of the bio-retardant formula (needed by himself because of injuries he suffered in an explosion caused by the Gadgeteer and to aid Dr. Giles recovery), Steel faced the worst doom of all, cancellation!  This, thanks to the DC Implosion…a collapse in the comic market that doomed many titles. 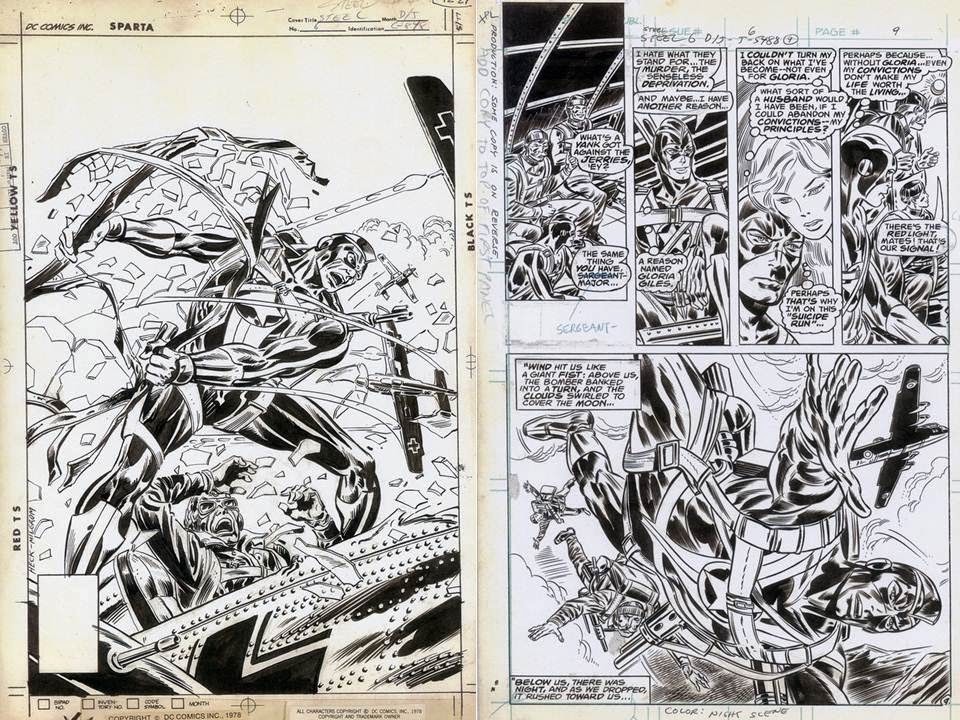 Still, even that couldn’t hold Steel down, as DC published what would have been Steel, the Indestructible Man #6 in the second issue of the Cancelled Comics Cavalcade (though only in photocopied black and white), and Roy Thomas used most of the story (with slight redrawings by Jerry Ordway, and a few changed words and missing pages) in All-Star Squadron #8 and 9 in 1982.  Here, we learned Dr. Giles recovered and told Hank he knew that Hank was Steel…and issued an ultimatum, that he should give up being Steel or leave his fiance, as the doctor wouldn’t have her engaged to an “overzealous, patriotic fool”.  Hank then left Gloria, and ended up in London, and got an assignment from Prime Minister Winston Churchill to kidnap Adolf Hitler!  Steel went behind enemy lines in January, 1940, realized he may have taken this suicide mission a little too easily (perhaps because he did not want to live without the love of Gloria) and ended up being captured and tortured in a Nazi concentration camp (where he  inadvertently allowed the Nazi super-menace of Baron Blitzkrieg to be created). 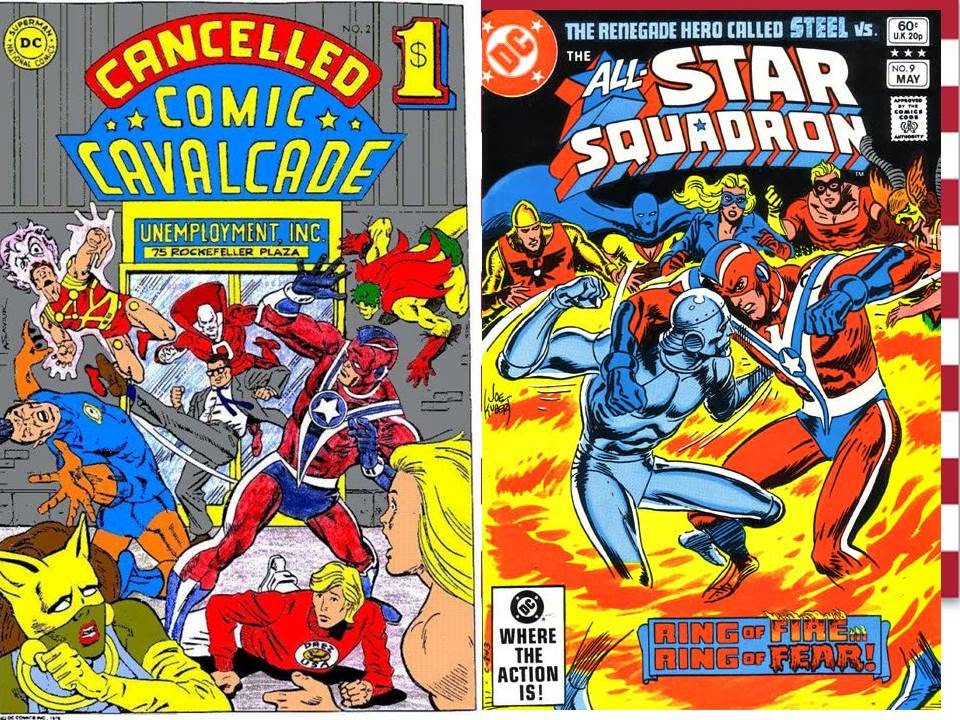 In the updated parts of All-Star Squadron #8 and 9, we found Steel in Canada, saving Churchill again (this time after Pearl Harbor and the USA getting involved in what would be World War II), and how Baron Blitzkrieg planned to use Steel to kill Churchill and then President Franklin D. Roosevelt!  The All-Stars helped save the Allied leaders, and FDR even rechristened Hank as Commander Steel, and Hank joined the All-Star Squadron soon after in January, 1942.  Sadly, Steel found his mentor has passed away and Gloria had blamed Steel for his death, and moved on, marrying soldier Brad Farley, who was shipping out to Europe.  Commander Steel had a few adventures with the All-Star Squadron (included a team-up through time, meeting the Justice League and Justice Society in Justice League of America #207-209 and All-Star Squadron #14-15, where they faced time-foe Per Degaton and the evil Crime Syndicate of America…and this reunited Commander Steel with his original creative team of Gerry Conway and Don Heck, at least for the JLA issues, wherein he teamed with other Conway creations Firestorm and Power Girl!).  Gloria even returned into Hank’s life, telling him of how her husband disappeared on a mission in Europe, and Hank, still in love with her, did the right thing and headed to Europe to save Brad Farley. 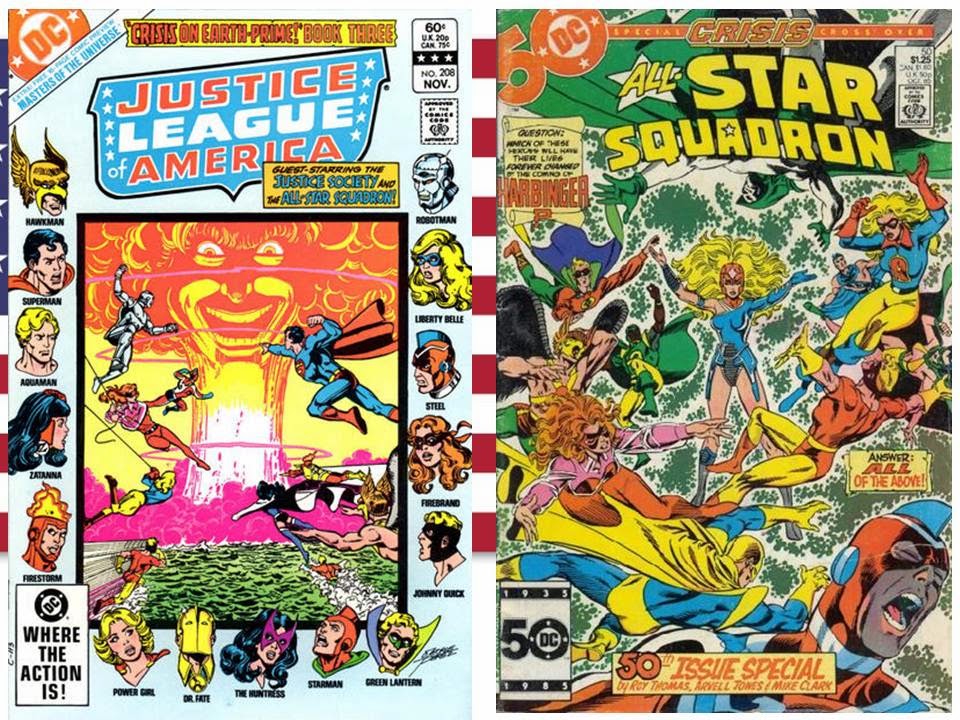 But, in another twist, in All-Star Squadron #50, Commander Steel did free Brad Farley in April, 1942, but thanks to dimensional stresses caused by the Crisis on Infinite Earths, ended up on Earth-1 (from his home on Earth-2), in April, 1942, where there were no super-heroes yet (as the Justice League of America had yet to be), so he retired for a time, concentrating on making a new life for himself without Gloria, and saving his country by beating the Nazi menace.  Commander Steel lost his mentor, his girl, and even his world, and he soldiered on…for his country!  That’s a super-patriot! 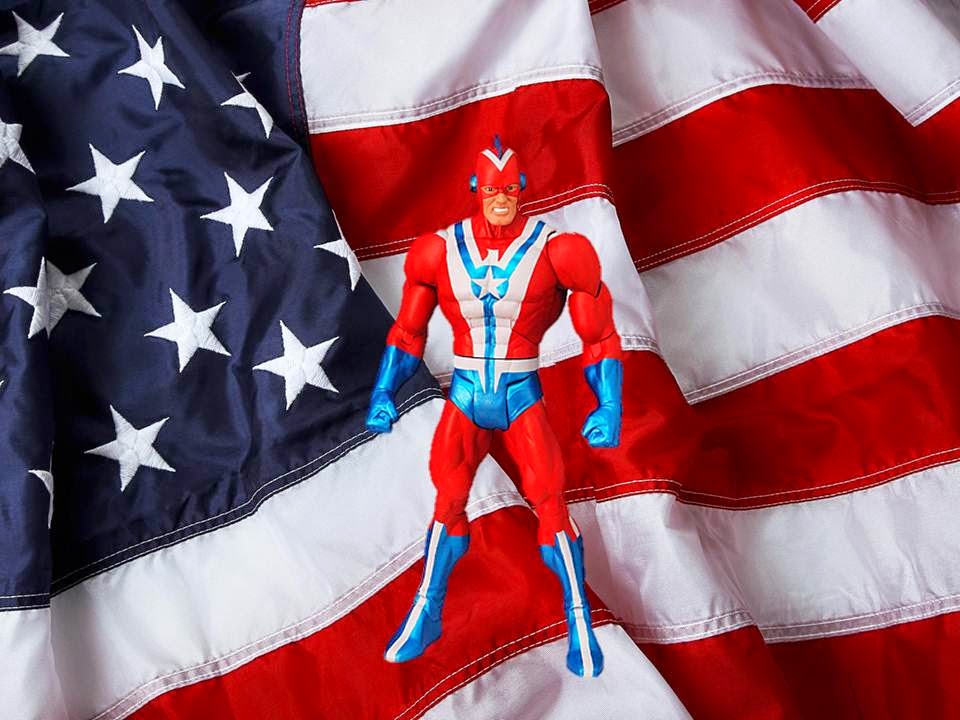 Commander Steel had a legacy, and that…can be looked at on a future date!
Posted by Dave's Not Here Comic Blog at 7:12 AM