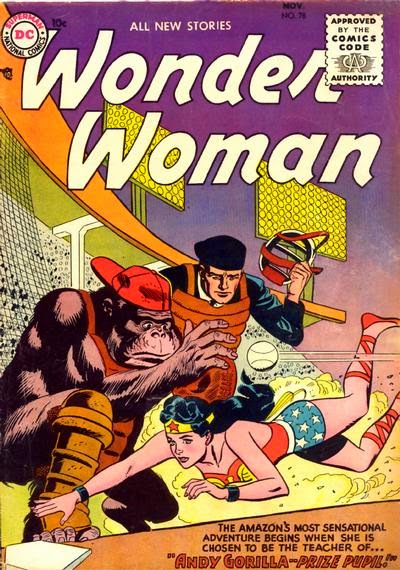 No, not talking about Babe Ruth, Ty Cobb, Lou Gehrig, Al Kaline, Pete Rose, Kirk Gibson, Reggie Jackson, or even A-Rod, but instead, a little bit on how comic books used some of their tried and true storylines with baseball players instead of super-heroes!

A great way to kick off the All-Star game and get a little of some the stranger parts of the Silver Age, where anything could happen….and often did! 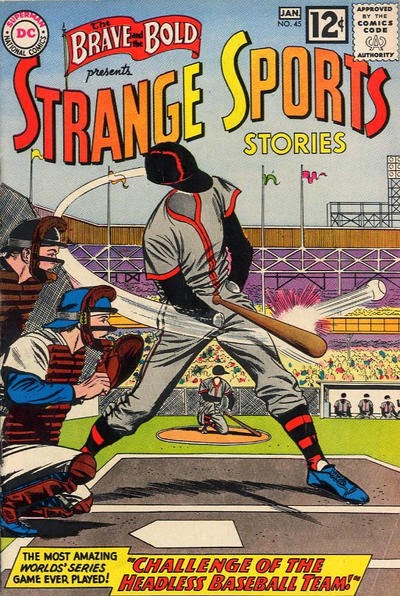 First up, a story from Brave & the Bold #45 (January 1963), wherein the baseball uniforms were animated to battle against a team of regular players in “The Challenge of the Headless Baseball Team” in a cover by Carmine Infantino and Murphy Anderson (and interior story written by Gardner Fox, with art by Infantino...).


This kicked off a run of Strange Sports Stories...and boy were these sports stories strange! 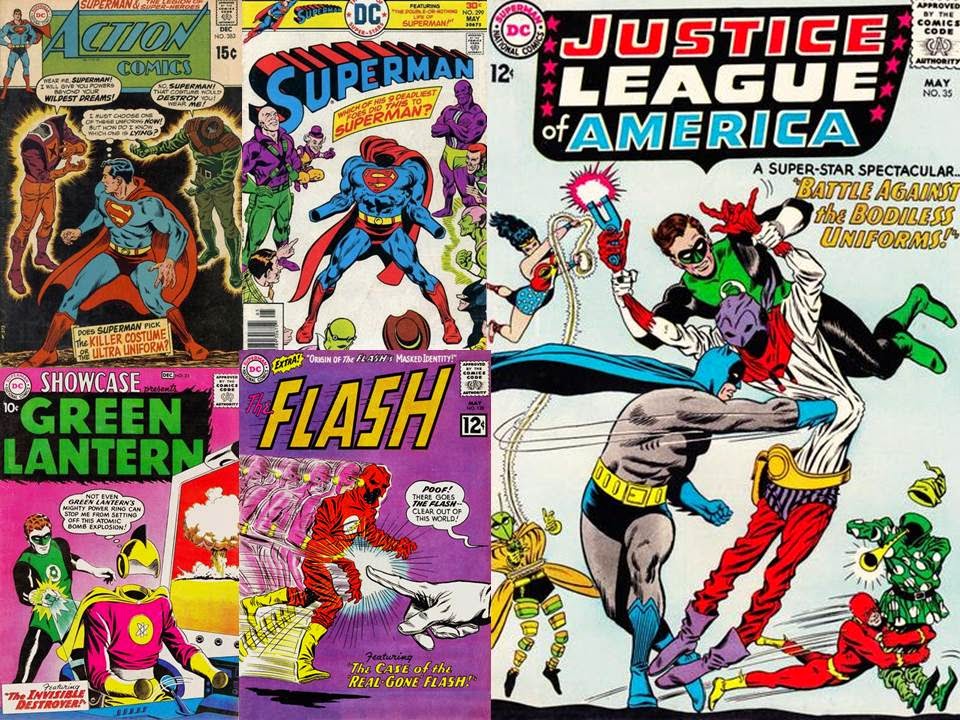 This theme of either the hero becoming a bodiless uniform, or fighting a bodiless uniform was used a few times, once in Action Comics #383-384 (Dec-Jan 1969, 1970) with Superman (and a little later in issue #299 of his own title when one of Superman‘s foes made him only his uniform!), Green Lantern foe - the Invisible Destroyer from Showcase #23 (November-December, 1959), a little bit in Flash (there was slight of hand involved with Abra Kadabra in his first appearance in #128 in May, 1962), and later on wherein the Justice League of America (in #35, May 1965) where the team faced off against the animated uniforms of a few of their fiercest foes like Pied Piper, Killer Moth and Dr. Polaris in the “Battle of the Bodiless Uniforms”!

Monkeying Around On The Field 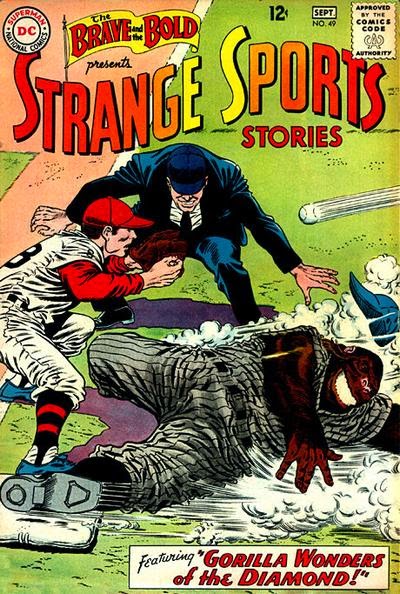 Then, another Strange Sports Story happened in Brave & the Bold #49 (September 1963, with another cover by Carmine Infantino and Murphy Anderson), wherein the baseball team faced off against simians, monkeying around on the infield in the “Gorilla Wonders of the Diamond!”, written by Gardner Fox!


This was also the last of the strange sports stories for Brave and the Bold, as they switched to super-hero team-ups with the next issue (starring Green Arrow and the Manhunter from Mars to start!) 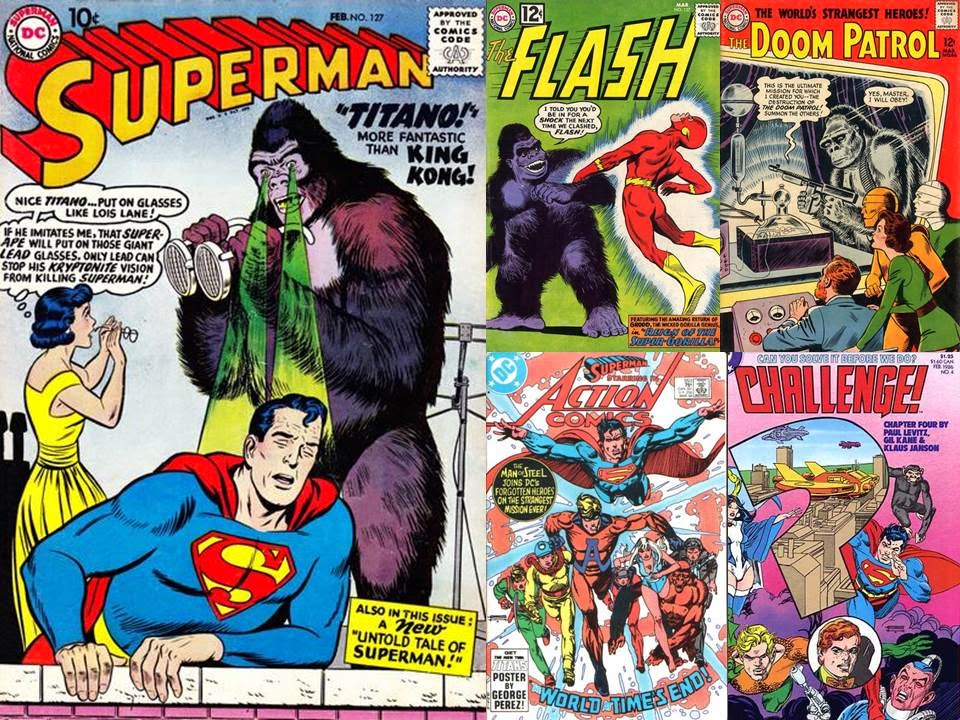 For those that don’t know, back in the Silver Age, it had been “proven” that putting an ape on a cover would increase sales of comics.  Superman had Titano (a monkey enlarged to King Kong size, with Kryptonite vision, first appearance Superman #127, February 1959), Flash had Gorilla Grodd (a super-intelligent beast with mental powers who first faced the speedster in Flash #106, April-May 1959, but he didn't make a cover until Flash #127), the Doom Patrol had Monseiur Mallah (an experiment and more with the Brain of the Brotherhood of Evil starting with Doom Patrol #86, March 1964), Congo Bill added Congorilla (a golden ape whom the great white hunter switched minds with thanks to a mystic ring) in Action Comics #248, January 1959, and even Rex the Wonder Dog had the Detective Chimp (a monkey who solved crimes starting with Rex, the Wonder Dog #4, July-August  1952)! 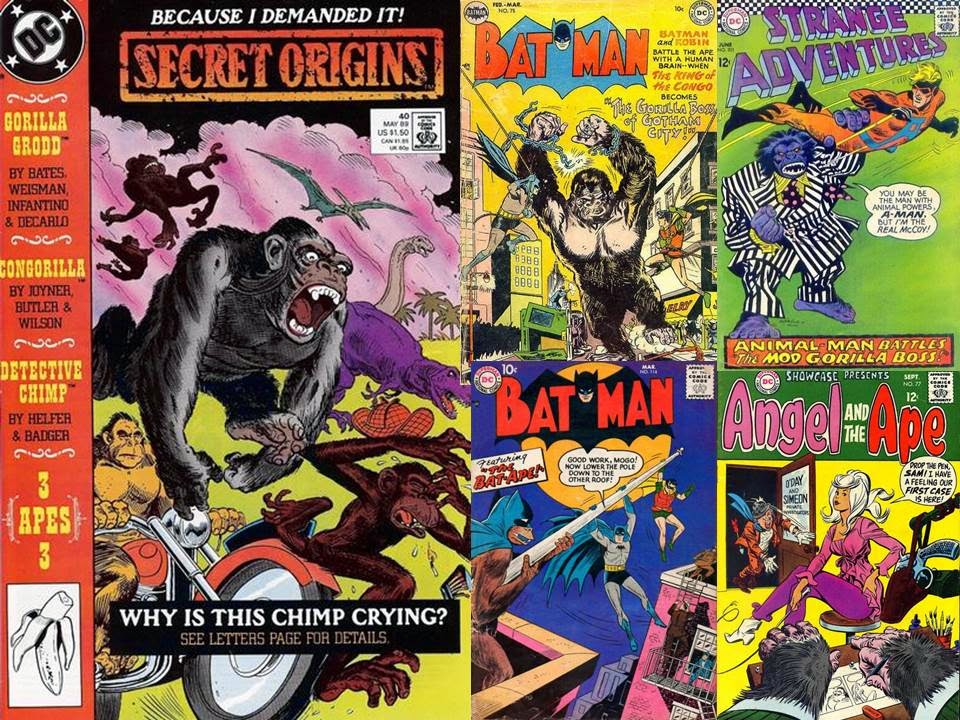 The simian fascination in comics is explained a little more in Secret Origins #40, featuring 3 of these characters (but still missing a few, like the Gorilla Boss of Gotham City (first appeared Batman #75, February-March 1953), the Mod Gorilla Boss foe of Animal Man from Strange Adventures #201, June 1967, Mogo the Bat-Ape from Batman #114, March 1958, even Sam Simeon of Angel & the Ape who started in Showcase #77, September 1968). 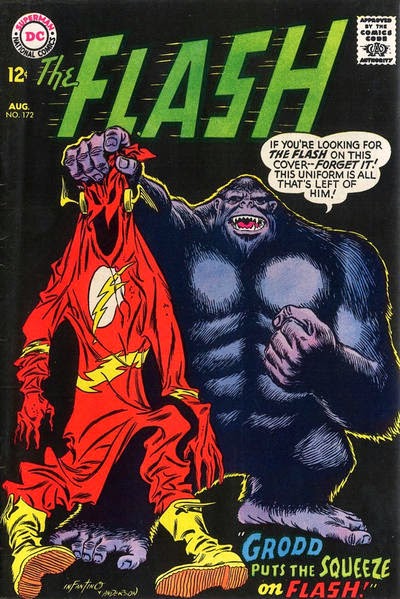 So, not only did your favorite costumed heroes fight some odd things back in the day, but so did the boys of summer!  Baseball sure was interesting back then.


You have to wonder who would have won, the empty uniforms or the gorillas?