Paranoia, the Destroyer of Thor 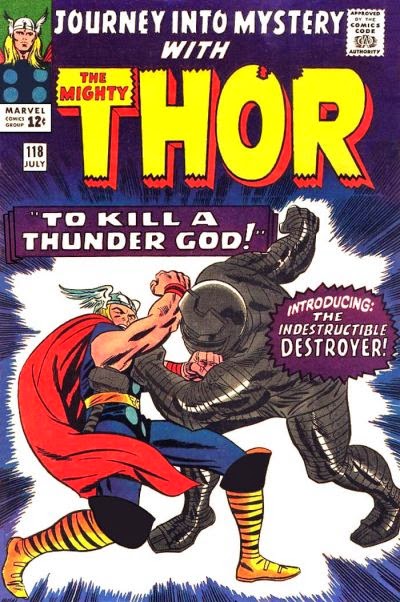 With thanks to Ray Davies of the Kinks, who gave us the song, Destroyer in 1979, Thor had faced his own Destroyer before that.

The Destroyer was also in the Thor movie that came out on May 6th, 2011.  You can have no fear, as you’ll get a little of the comic history of the Destroyer, created by Stan Lee and Jack Kirby right here!

Thor first faced the armored Asgardian construct known as the Destroyer in Journey Into Mystery #118 (July 1965).  The Destroyer is a suit of armor made of uru metal with no will of its own, so it has to have a life force inhabiting it to act.

The suit was created by Odin (the All-Father of the Asgardians, and father to Thor), which does seem like a strange thing, doesn’t it? 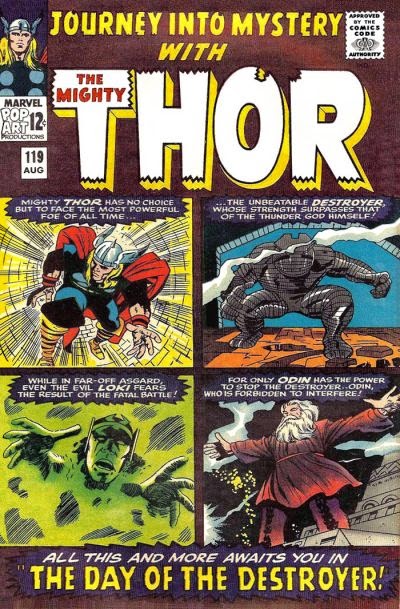 The animated Asgardian armor was found in the Temple of Darkness by a hunter, Buck Franklin, who Loki (Thor’s evil magic using step-brother) had manipulated into finding the armor, and then set him against Thor.

Thor tricked the hunter into vacating the armor, and Odin buried the lifeless beneath a mountain of rubble that had been the Temple of Darkness.

This should have been the end of the Destroyer....

The Return of the Destroyer 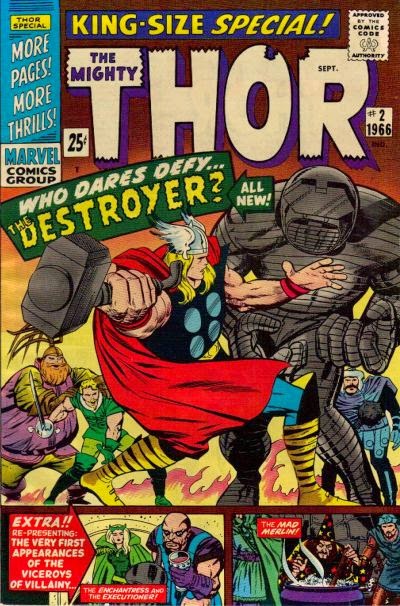 The armor returns briefly, thanks to being possessed by the spirit of Loki in Thor Annual #2 (September, 1966).

Odin stops Loki’s evil plan to hurt Thor and his friends, the Warriors Three (Fandral the Dashing, Hogun the Grim and Volstagg…well, the round; these three, like the Destroyer, were additions to the comic mythology that were not a part of Norse mythology) and the All-Father banished the armor.

Karnilla, the Norn Queen, then retrieved the Destroyer, and Sif (a female Asgardian goddess of the hunt who has a thing for Thor) animated the suit and used it to help a weakened Thor battle his nemesis, the Wrecker (Dirk Garthwaite, a worker in a demolition crew who got strength and stamina from a crowbar enchanted by Karnilla and with this power thought he was Mr. Big Man). 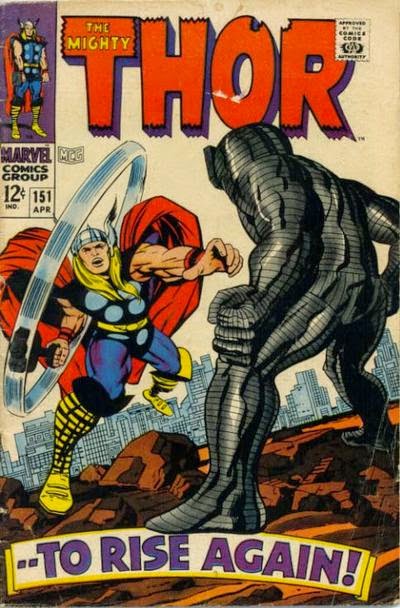 Sif’s plan to help doesn’t go so well after she defeats the Wrecker while in the Destroyer armor, as Thor ends up attacking the Destroyer.

Still, this all gets resolved and Odin takes the armor away (and this all happens in Thor #150-152 in 1968, still under the sway of Lee and Kirby).

The Destroyer went away for a while, but came back in force! 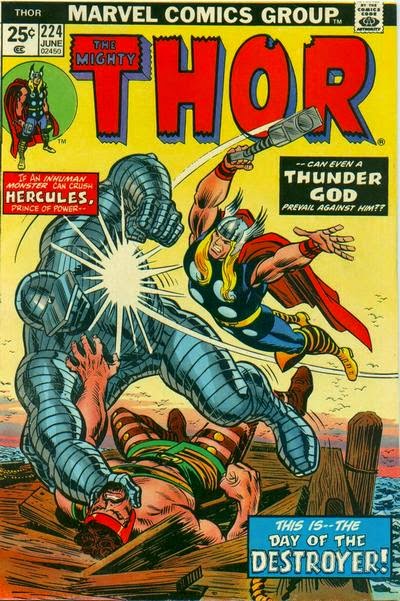 Thor next encounters the Destroyer with his friend, and fellow Avenger, Hercules (the son of Zeus, and an Olympian demi-god) starting with Thor #224 (written by Gerry Conway, who also teamed Hercules with Thor in the television medium, when the show, Hercules: The Legendary Journeys, was on the air, in the episodes “Norse by Norsevest” and “Somewhere Over the Rainbow Bridge” and art by John Buscema).

The Destroyer armor was animated this time by Professor Clement Holmes, who found the armor in South America.  The Destroyer fights Hercules and Thor, and they get the Professor’s soul out of the armor.  Thor and Hercules then end up meeting Firelord (Pyreus Kril, a herald of Galactus), and, after an adventure with Galactus’ herald that convinces them that Firelord wants to be free of Galactus, offer up the Destroyer to be Galactus’ new herald to allow Firelord his freedom.  No one seems to be concerned with the Destroyer’s freedom, but then again, it’s basically just a suit! 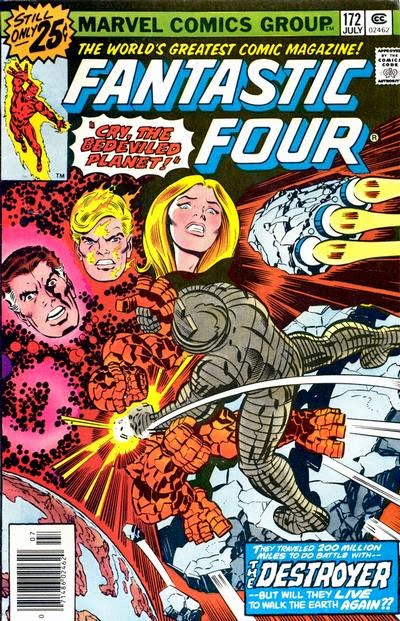 The Destroyer, now animated by a part of Galactus’ life-force, finds High Evolutionary’s Counter-Earth (an Earth duplicate complete with on the opposite side of the Sol system).


Galactus (Galan, a primal force in the universe that desires maximum consumption) must feed, but the Fantastic Four distract him and convince him to look for a new world to feast upon (and, during this, the Thing faces the Destroyer, with Ben Grimm aka the Thing not his usual rocky self, but instead just a man in a Thing exoskeleton armor! 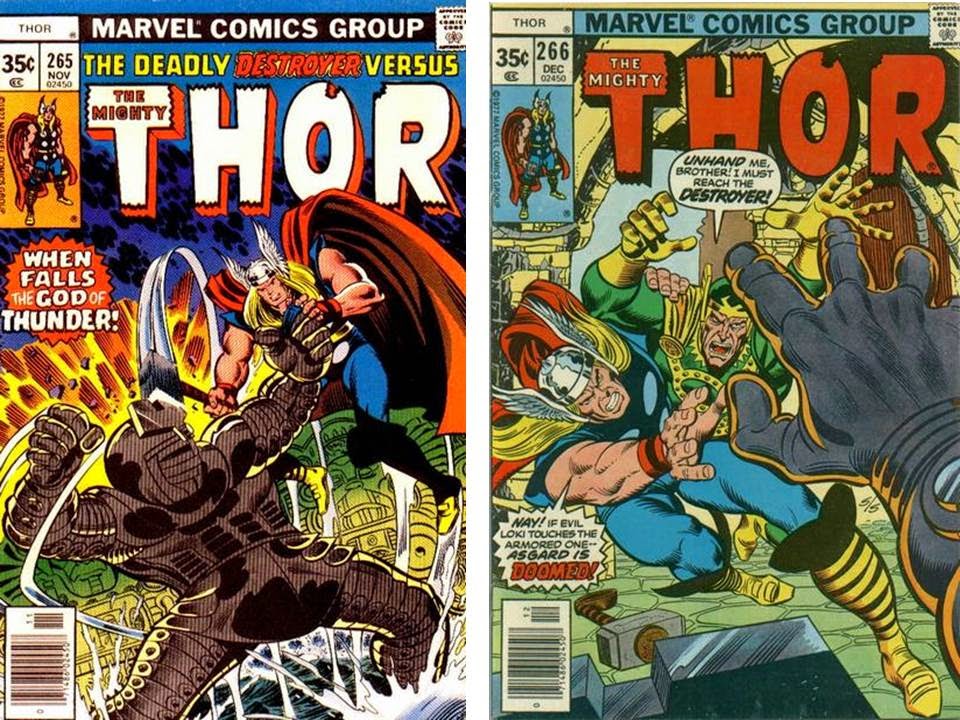 Loki uses this opportunity of distraction to take the Destroyer, trick Balder (Thor’s Asgardian friend) into animating the suit, then getting Balder OUT of the armor when the Destroyer tries to kill Loki instead!

Thor briefly inhabits the Destroyer armor at this time, but Odin forces him out and keeps the armor in Asgard (and it all happens in Thor #264-266, by Len Wein and Walt Simonson in 1977).

The Epic of the Destroyer 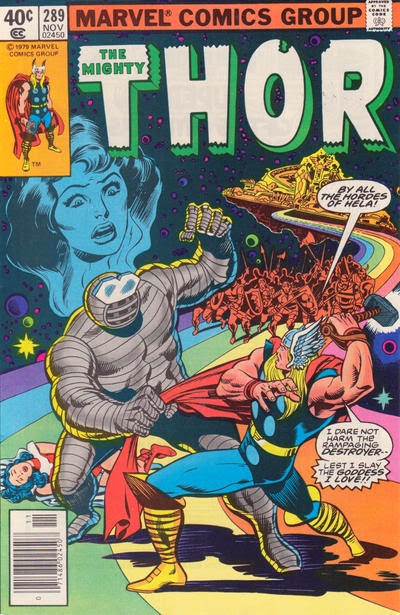 In an incredible epic by Roy Thomas, we learn the truth behind the Destroyer (after all, it seems the armor has only caused pain and suffering to Thor and his friends and allies…so, why DID Odin create it?).

A time later, when Thor was at odds with Odin (when isn’t he?), Sif inhabits the Destroyer to enforce Odin’s exile of Thor and sends Thor to Earth from Asgard.

In Thor #300 (with art by Keith Pollard, in October, 1980), we learn that Odin created the Destroyer to host the souls of all the Asgardians in Asgard to allow them to battle the Celestials (space gods created by Jack Kirby, who stood in judgment of humanity for eons, and the judgment was coming soon; well soon in god terms). 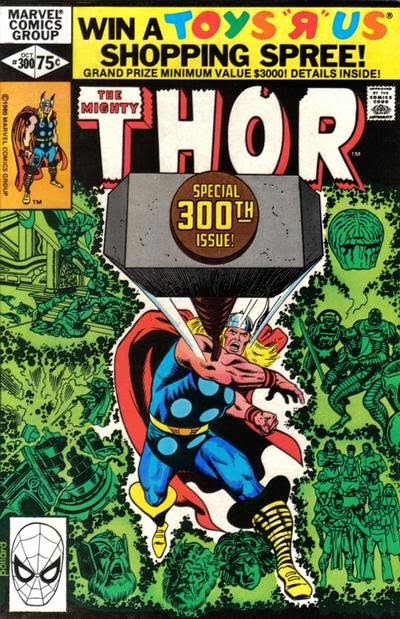 Odin had enlisted help from other Earth pantheons (like the Olympian Zeus) to power the Destroyer armor.

Sadly, the Destroyer did not fare well against the Celestials (even grown to giant size and wielding the Odinsword), being melted into slag.

(Thor and others stopped the Celestials from destroying Earth and restored the Asgardians, by the way).

And, the rest of the story on the Destroyer will follow next week (after all, just because you’ve been melted down doesn’t end your existence, right?).
Posted by Dave's Not Here Comic Blog at 6:00 AM