More on Marvel’s Showcase on Super-Heroes 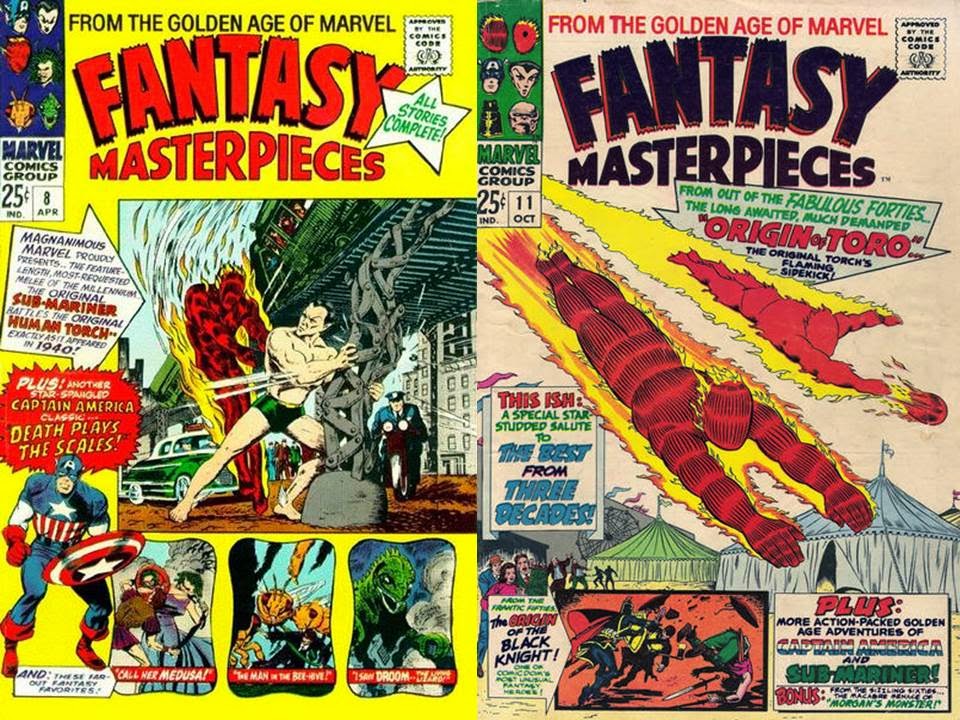 That leads us back to the new stories in Marvel Super-Heroes, and the next issue in line…

A Knight In Time 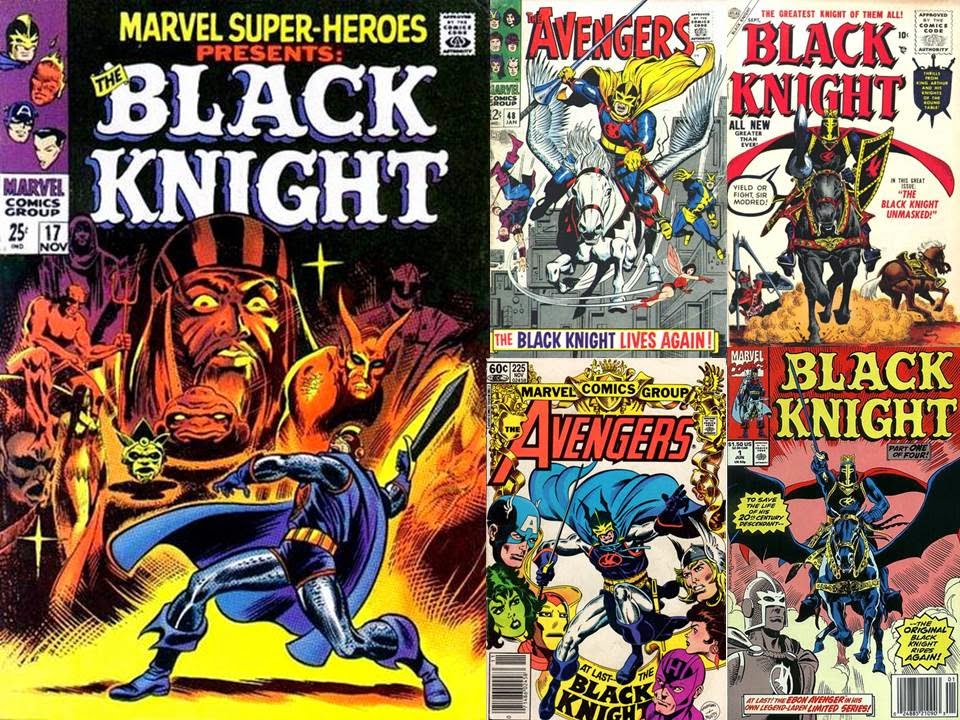 Marvel Super-Heroes #17 (November, 1968 by Roy Thomas and Howard Purcell) features Dane Whitman, the nephew of Nathan Garrett (a foe of Giant-Man’s and member of the original Masters of Evil), but Nathan died, passing along the mantle of Black Knight to Dane (and Dane first became the Black Knight in Avengers #48).  In MSH #17, Dane meets the spirit of Sir Percy (the original Black Knight) and gets the Ebony Blade and defeats Le Sabre (Paul Richarde) who was chosen to oppose the Black Knight.  The Black Knight was an on-again, off-again Avenger for many years, but it took until 1990 for him to have a four issue limited series (by Roy and Dann Thomas and Tony DeZuniga).  Marvel Super-Heroes #17 was reprinted in Marvel Masterworks Volume 84: Avengers #7 (along with Avengers #59-68, Black Knight’s earlier appearances were in the previous 2 Avengers Marvel Masterworks) and all 5 issues of Sir Percy’s Black Knight were reprinted in Marvel Masterworks Volume 123 : Atlas Era Black Knight/Yellow Claw.

Defenders of the Future 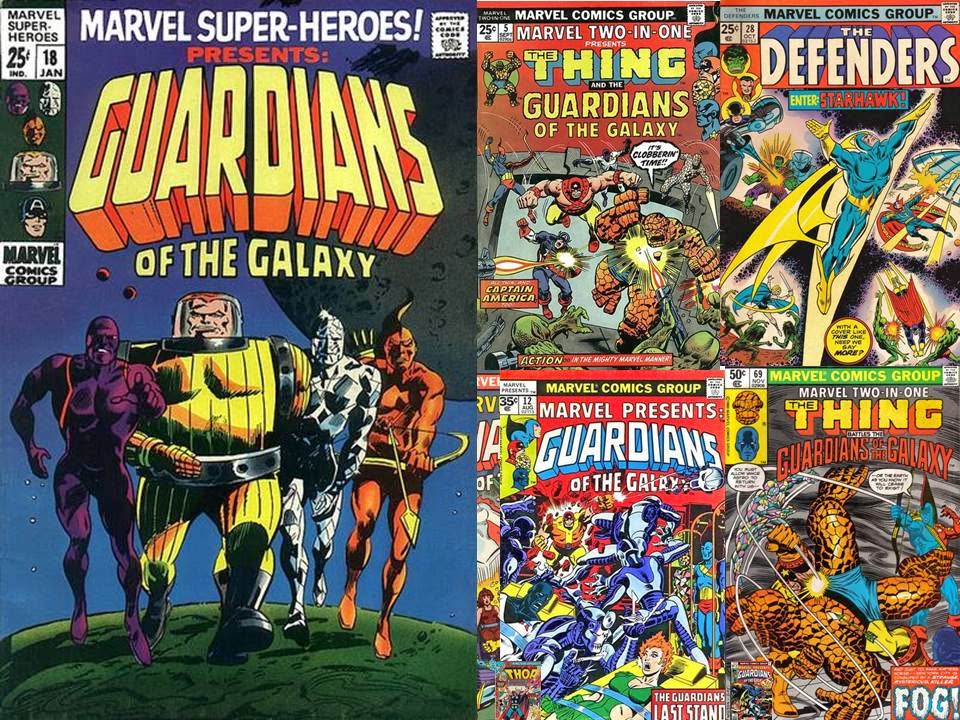 Marvel Super-Heroes #18 (January, 1969) has writer Arnold Drake and artist Gene Colan taking the reader to the future of the Marvel Universe… 3007, to be exact.  That’s when astronaut Major Vance Astro arrived at Alpha Centauri from Earth (of 1988, at the time…the future!) after over 1000 in suspended animation and forced to wear that suit or he’d age away!  While there, he met Charlie-27, an extra dense soldier from Jupiter; Martinex (a crystalline being from Pluto); and Yondu, an archer who was native to the fourth world of Alpha Centauri.  These men united to fight the Badoon…to free Earth!  The team didn’t appear again until Marvel Two-In-One #4-5 (July-September 1974) and then in Giant-Size Defenders #2 and Defenders #26-29 (in 1975) fighting along side modern heroes like the Thing, Captain America and the Defenders.  The team added Starhawk to their membership while fighting alongside the Defenders, then were featured in Marvel Presents #3-12 (where they added Mercurian female Nikki to the line up) in the 1970s…and encountered the Avengers during their war with Korvac and met Spider-Man in Marvel Team-Up, as well as Ms. Marvel in the last issue of her book (and Vance Astro met his Marvel world counterpart, Vance Astrovik, who would later be known as Justice of the New Warriors when working with the Thing in Marvel Two-In-One).  While not having a Masterwork, Marvel Super-Heroes #18 is reprinted in Guardians of the Galaxy: Earth Shall Overcome and in Guardians of the Galaxy: Tomorrow’s Avengers (along with their earliest appearances in other books).

Welcome to the Jungle 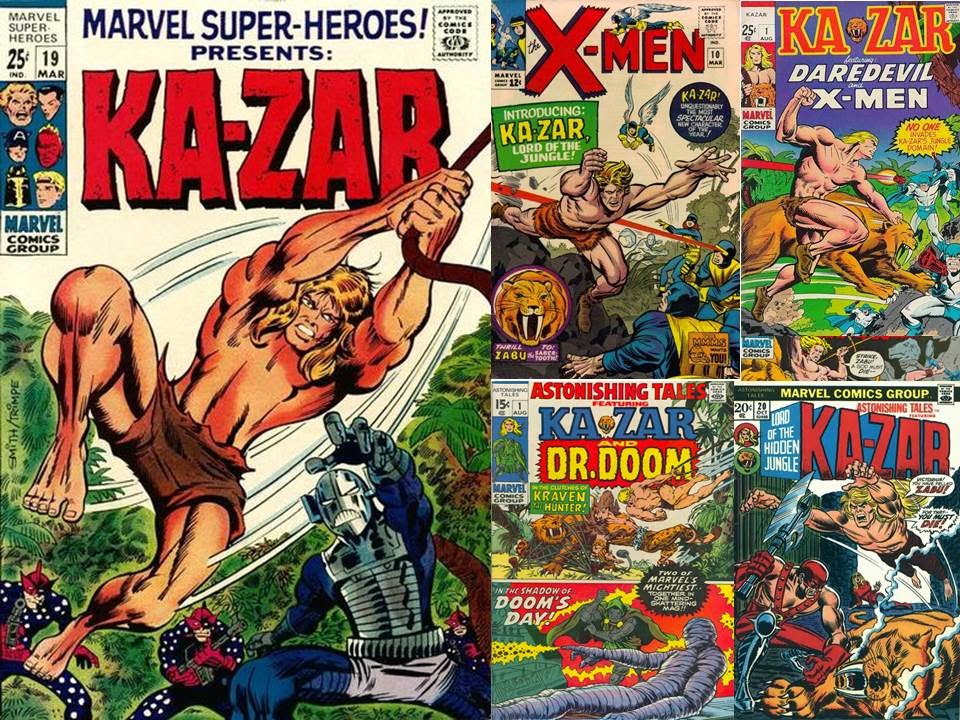 Ka-Zar, Marvel’s jungle hero,  swings into Marvel Super-Heroes #19 (March, 1969) in a story by Arnold Drake and Steve Parkhouse with art by George Tuska (and a cover by Barry Smith, before he became Barry Windsor-Smith).  The lord of the Savage Land and his pet sabretooth tiger Zabu faced off against Kevin’s brother, the Plunderer in this series that pulled together the history of a character (Ka-Zar/Kevin Plunder first appeared in X-Men #10 in March, 1965 by Stan Lee and Jack Kirby, and Lord Parnival Plunder/the Plunderer was first in Daredevil #12, in January, 1966 by Stan Lee, Jack Kirby and John Romita) who bounced around the Marvel Universe…and led to his own title (which oddly reprinted earlier Ka-Zar appearances in Daredevil and Amazing Spider-Man, yet had new stories of Hercules and the Angel), but had new stories in Astonishing Tales (which he shared with someone….well, for the first 8 issues anyway).  Ka-Zar spent his time in the 20 issues of Astonishing Tales fighting A.I.M., Spider-Man foe Kraven the Hunter, the Man-Thing, member of the Zodiac Gemini, the Plunderer and Victorius (a scientist trying to re-invent Captain America’s super-soldier serum) as well as working with S.H.I.E.L.D. agent, Bobbi Morse (who eventually became Mockingbird)!  Marvel Super-Heroes #19, along with the first 16 issues of Astonishing Tales were presented in Marvel Masterworks Volume 190: Ka-Zar #1.

He Shall Be Your Doom 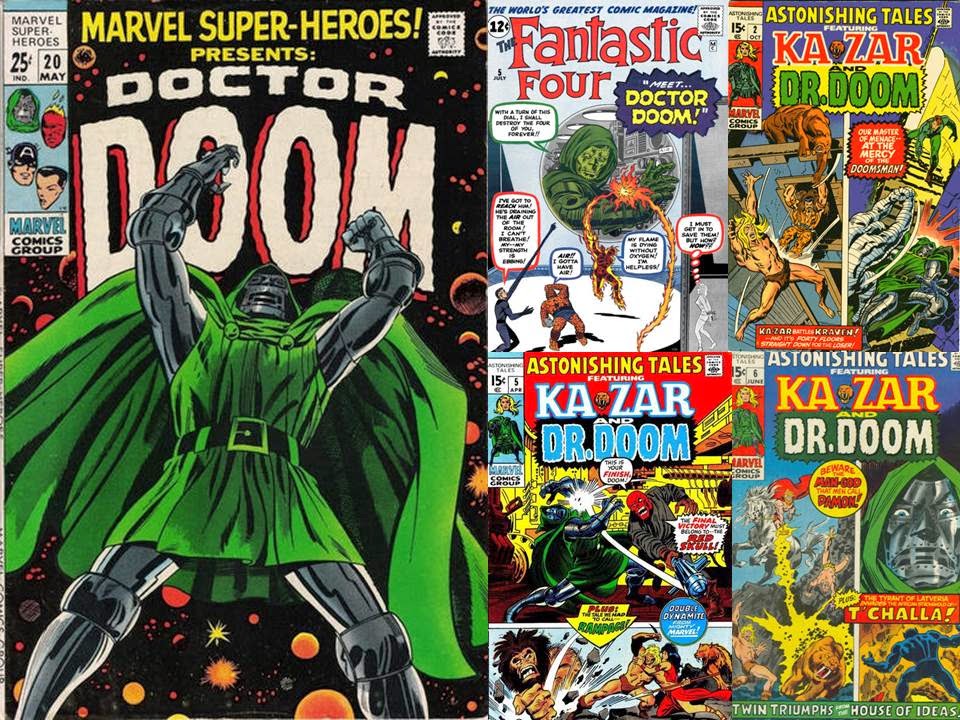 Marvel Super-Heroes #20 (May, 1969, in an issue written by Larry Lieber and Roy Thomas and drawn by Larry Lieber and Frank Giacoia) was the last issue to feature new stories in the 1960s…and it didn’t even really feature a hero!  Instead, it featured Victor von Doom, the foe of the Fantastic Four (since Fantastic Four #5 by Lee and Kirby in July, 1962)…Doctor Doom!  With “This Man…This Demon!”, we saw the softer side of the monarch of Latveria…as he battled el Diablo (another foe of the Fantastic Four) and met the love of his live…Valeria.  Still, this wasn’t the only attempt to portray Doom as a hero, as he joined Ka-Zar as half the feature of Astonishing Tales for its first 8 issues (from August, 1970 to October, 1971) where he fought the Doomsman, Red Skull, the Black Panther…and even Satan at the end, for the soul of his mother).  Doom even had another crack at a title, with Super-Villain Team-Up (where he worked with Sub-Mariner for two Giant-Size issues and 13 regular issues, then against Magneto in #14, before a reprinting the Astonishing Tales vs. the Red Skull in #15, who finished out the last two issues with MODOK and the Hate-Monger but not Doom).  Still, you won’t have to be without Dr. Doom as Marvel plans to reprint Marvel Super-Heroes #20 along with the first 8 Doom Astonishing Tales in Marvel Masterworks Volume 209: Dr. Doom #1! 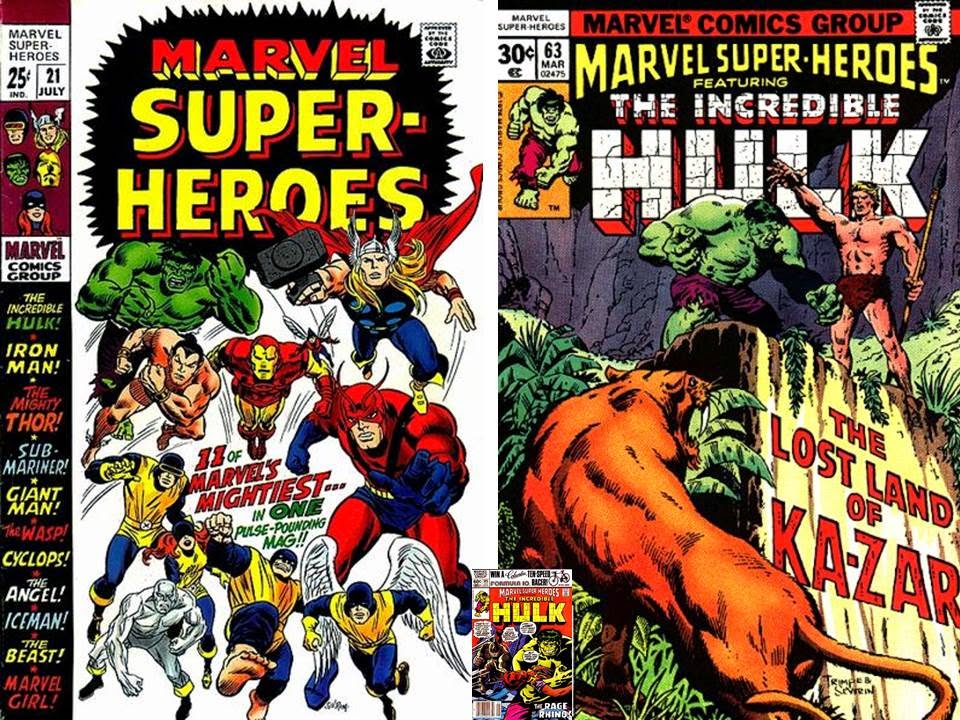 The title then went to all reprints, being X-Men and the Avengers to start, then Iron Man and Daredevil, before settling on the Incredible Hulk until its end with issue #105 (facing the Rhino, no less)!  But, for a while, there were new tales in Marvel Super-Heroes!
Posted by Dave's Not Here Comic Blog at 6:52 AM