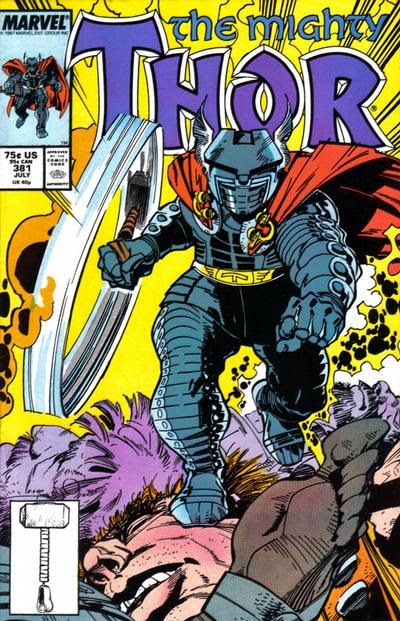 Picking up where we left off last week…the Destroyer was destroyed.  Melted by the Celestials.  Appears this invincible armor with the disintegrator visor wasn’t so invincible, was it?  Well, yes and no.  Nothing ever goes away forever, and that includes Odin-powered constructs.

The Destroyer had remained inert until Loki tricks Frost Giant Siggoth into stepping on the slag, reforming and reanimating the armor.  And, as always, the armor goes looking for Thor.

Thor himself had undergone some massive changes, being cursed to be unable to die, yet not as invincible as he once was, and was held together only by his magical armor at this point.

The Destroyer, realizing that Thor would be an ideal host, kills Siggoth and tries to absorb Thor’s spirit. 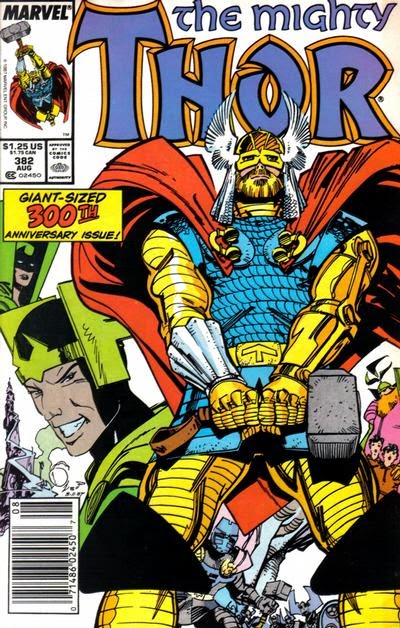 The Destroyer armor takes Thor’s belt, cape and hammer, Mjolnir (as you can see by the cover of Thor #381, drawn by Walt Simonson, who also wrote the story, and was the penciller for Thor #264-266, and writes and draws the conclusion to this story in Thor #382, and art on the interior of #381 is by Sal Buscema, brother of John Buscema, who drew Thor #224-225), and goes to Hel to confront Hela (the Asgardian Angel of Death).

The Destroyer does such damage to Hel, that Hela heals Thor’s body, and he leaves the armor to back to his own body (Thor, faking the idea of “you really got me”, had been in control of the armor the whole time to get Hela to heal his body!). 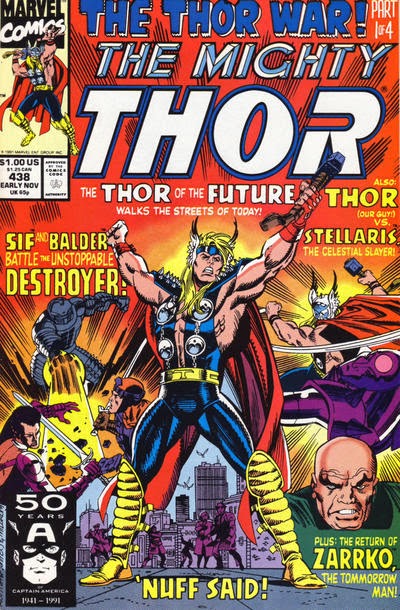 Hela kept the Destroyer, encased in crystal, until it was possessed by the spirit of Lorelei.

Hela then stopped the Destroyer with the help of Balder and Sif, casting the Destroyer (with Lorelei’s spirit) into the realm of the Great Beasts.

Later, Hela casts Lorelei out of the Destroyer armor and uses her guard dog, Garm, to animate the armor to attack Thor. 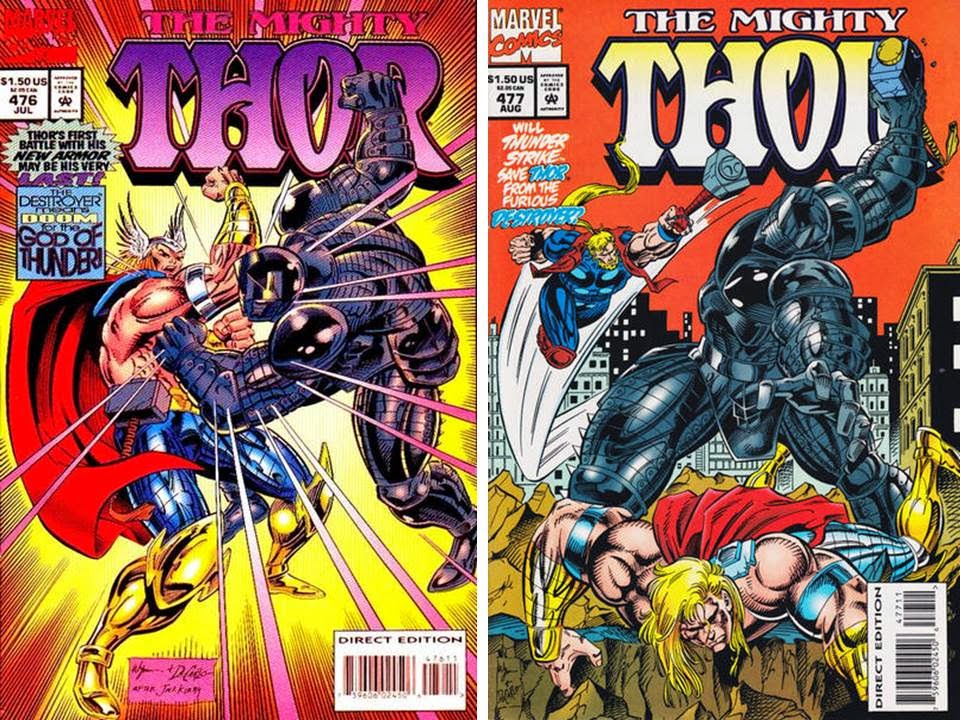 Thor and his friend Thunderstrike (mortal Eric Masterson, who has Thor like powers) defeat the Destroyer (this in the issues Thor #476-477 in 1994, written by Roy Thomas, and an issue each penciled by McWyman and Stewart Johnson).

The Destroyer took on two Thors to get pretty sore this time...

The next spirit to inhabit the Destroyer is the Maestro (an evil,  future version of the Hulk from Hulk: Future Imperfect...) who uses the armor to try to kill his earlier self, but the armor knows the Hulk and Maestro have the same spirit, and the Hulk was able to use the armor to force the Maestro out of its armor.

This all happens in Incredible Hulk #461, written by Peter David penciled by Adam Kubert in February, 1998.

(Though the Destroyer didn't make the cover....usually the Hulk is a better host than that...and you'd think he'd show a little sympathy to someone grey...) 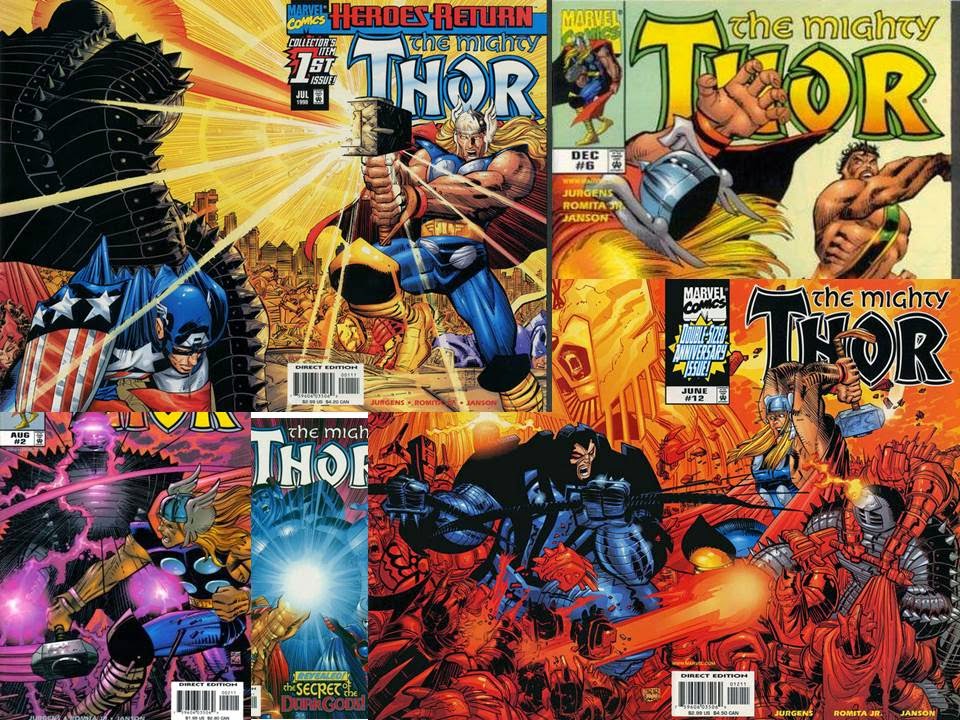 The United States military ended up with the armor (around the time of the new Thor #1, with new writer, Dan Jurgens and new artist, John Romita Jr.), and Colonel Preston Case animated the armor, and used it to attack the Avengers.  Thor banished the armor to another dimension, but returned it to help free the Asgardians who were being held by Dark Gods (and this whole battle against the Dark Gods lasted through Thor #12, mostly without the Destroyer, but Hercules had signed on to help as well).

Time Out for the Destroyer 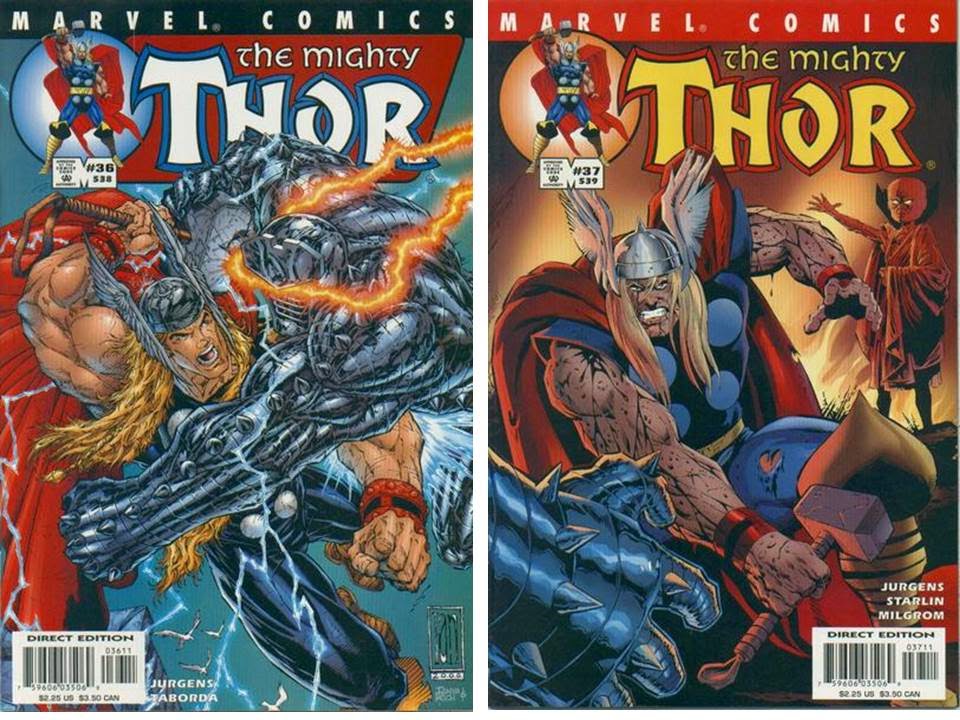 When freed, Odin released Col. Case from the Destroyer.  Later still, Loki and Karnilla manipulated Thor Girl (Tarene) into using the armor to battle Thor, but their plan was stopped, and this happened from Thor #36-38, also written by Dan Jurgens, with art an issue at a time by Walter Taborda, Jim Starlin and Stuart Immonen.


Odin releases Tarene from the Destroyer armor.  And, the Destroyer animates again in a story from Thor #78-79, also written by Dan Jurgens, with art by Scot Eaton,  that ended up not happening due to Thor eliminating the cause of the events from the timeline. 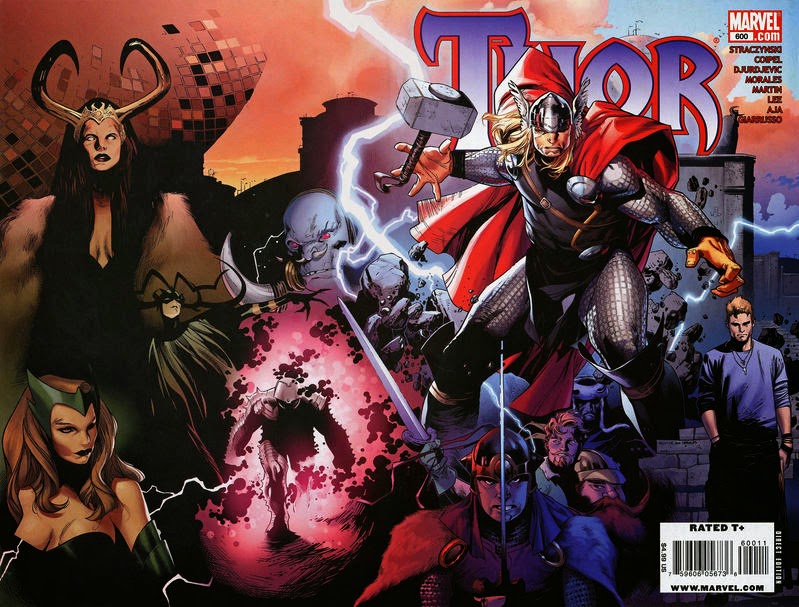 Then, Loki used the Destroyer again to gather the newly mortal Asgardians (thanks to events in the recent Ragnarok, the end of the gods), with Balder in the armor (and this happened in Thor #5, written by J. Michael Straczynski and art by Olivier Coppel).

Thor drove Balder out of the armor and saved the Asgardians (and all this let to Thor #600, reinstating Thor's original numbering for a time).

Most recently, in the Iron Man/Thor four issue mini-series written by Dan Abnett and Andy Lanning, with art by Scot Eaton, the High Evolutionary, with the help of Diablo (an alchemical foe of the Fantastic Four), used the Destroyer armor to try to gain the power of the various pantheons who helped create the armor. 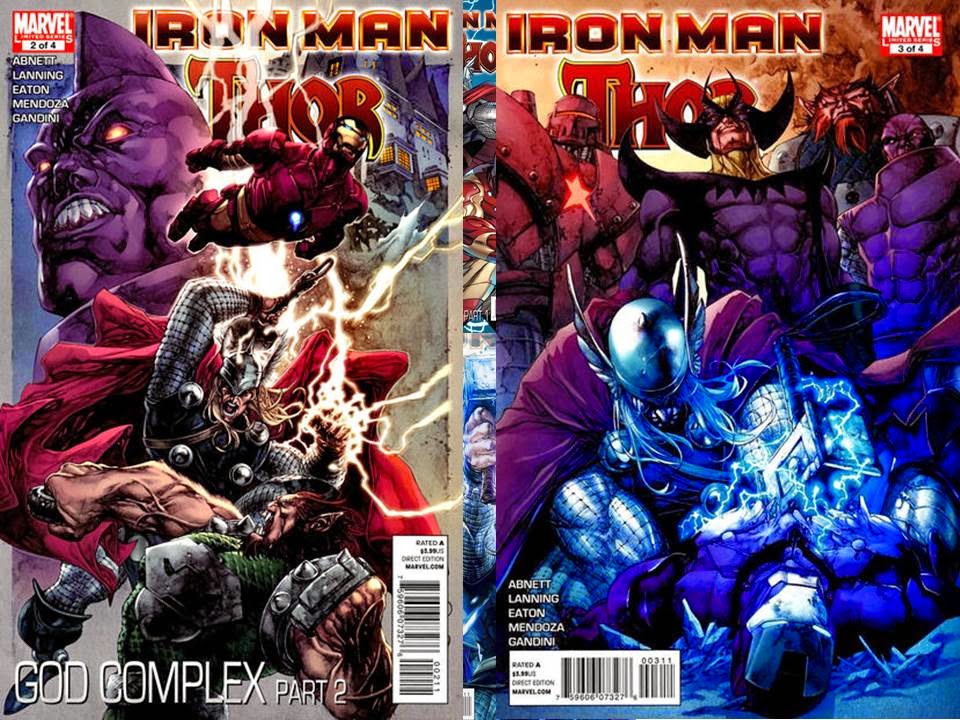 They were stopped by Thor and his friend, Iron Man.

Interesting that the comics brought Thor and Iron Man together at this time, when Iron Man has his successful movie franchise, and Thor is starting his.  Makes you think…could they be planning on putting these celluloid heroes together on screen?  (Yes, true believers…the Thor movie was followed by Avengers movie, that also featured a not so little green man and a few others).

Now we just have to wait a few months, until a certain shield wielder can claim this is Captain America calling!
Posted by Dave's Not Here Comic Blog at 6:30 AM