Or, this isn’t your Junior Justice League (or even Young Justice!). 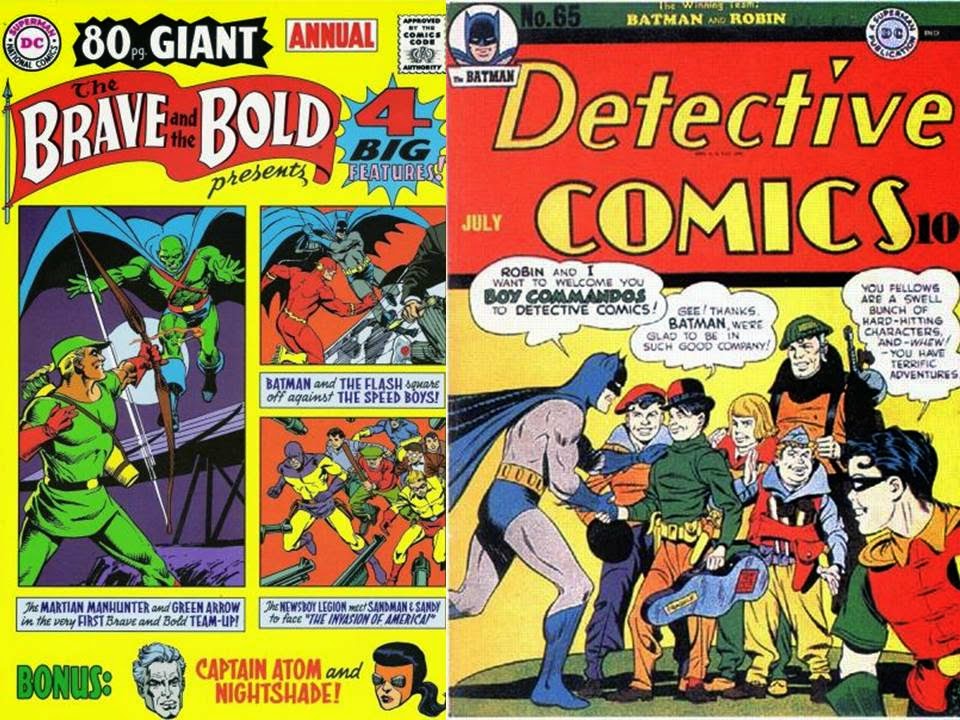 Back in the early days of comics (the 1940s), heroes were given proteges to enhance the reader experience.  Child labor laws were a little easier back then, so having a brightly garbed kid next to you to take bullets for you was not really frowned on.  And, these youngsters fought crime with an older hero, giving the kid reading the stories someone to identify with.

At DC Comics, Batman had Robin, Green Arrow had Speedy, Sandman had Sandy, Stripsey had the Star-Spangled Kid, and so forth.  Kids even gathered to fight crime (or the war) with the Newsboy Legion and the Boy Commandos (they weren’t super-heroes, though the Newsboys worked with the Guardian, an adult who was).  The Newsboy Legion, Boy Commandos and Sandy even teamed-up in Detective Comics #76 (June 1943, by Jack Kirby and Joe Simon) to fight Nazis (along with Sandman and the Guardian). 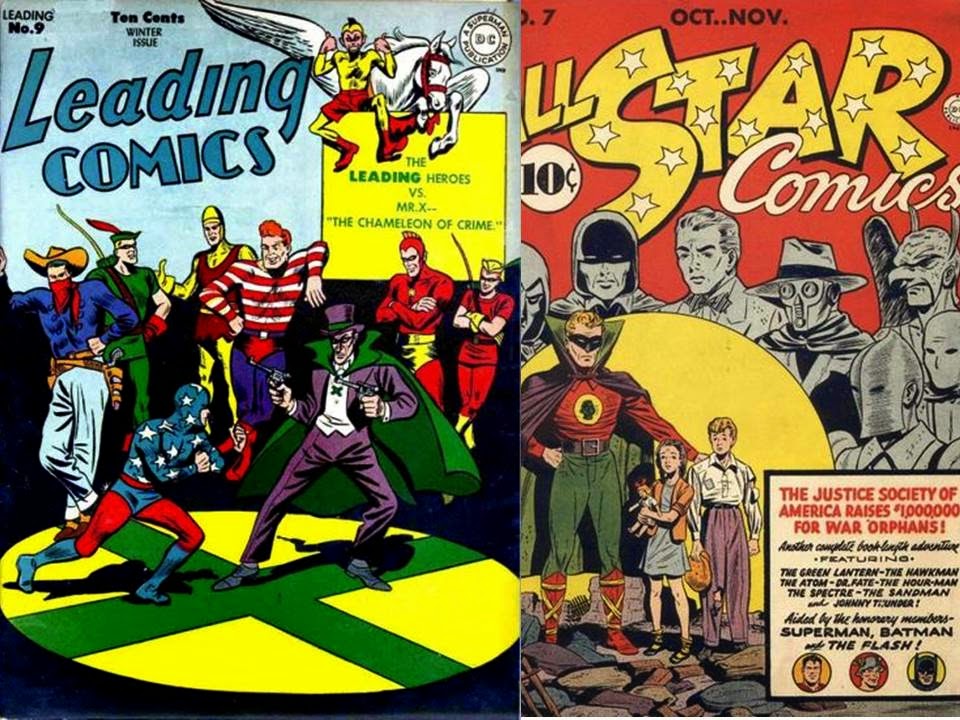 Star-Spangled Kid and Speedy were both members of the Seven Soldiers of Victory in Leading Comics for 14 issues along with their mentors (Stripsey and Green Arrow), and a few other heroes like the Crimson Avenger, Shining Knight and Vigilante. 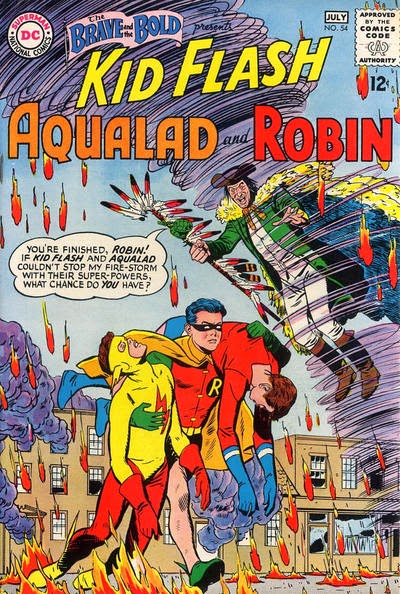 But, the various sidekicks didn’t work together without their mentors until Brave & the Bold #54 (June-July 1964) by Bob Haney and Bruno Premiani, but this set the stage for so much more!

This is NOT an appearance of the Teen Titans, but just the three kids (Robin, Kid Flash and Aqualad – three of the five charter Teen Titans, and well, the other two being Speedy and Wonder Girl, if you didn’t know) first working together to stop the menace of Mr. Twister in Hatton Corners.  (Remember Brom Stikk aka Mr. Twister…he does indeed pop up later!)  These kids first meet and stop the menace to the small town…all without the help of their famous partners.

But, before getting ahead of ourselves, let’s meet the future Titans! 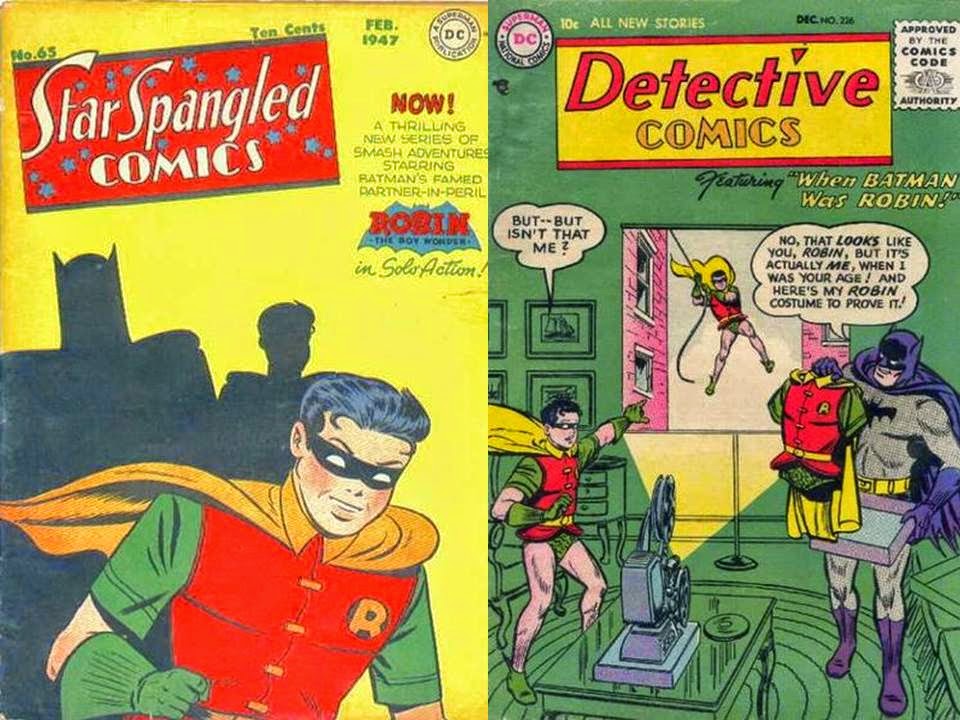 One of the very earliest of the sidekicks was Robin, The Boy Wonder.  He first appeared in Detective Comics #38 (April, 1940, by Bill Finger and Bob Kane, though the first appearance of the Earth-1 Robin would be Superman #76 in May-June 1952, and he’s the one who would be a Titan...it was the earlier Robin who had solo adventures in Star-Spangled Comics!). 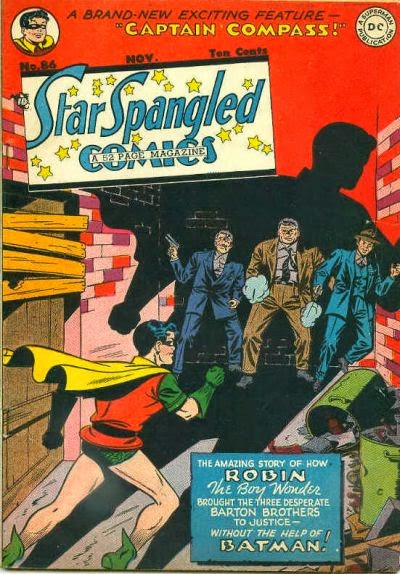 Dick Grayson first became the Robin, the Boy Wonder, back in the day, as he was a member of the circus act, the Flying Graysons, along with his parents, at Haly’s Circus.  When the circus came to Gotham, the owner ran afoul of a mobster by the name of Boss Zucco, who had John and Mary Grayson killed during their high-wire act.  The boy, young Richard, survived, but Bruce Wayne (aka Batman) took him in for the lad’s safety (though how safe he was fighting crime…is something that can be debated!).  Still, Batman had the boy’s best interest at heart, and worked to keep him safe, even while fighting crime, and with the help of Alfred Pennyworth, raised him to eventually strike out on his own and help others as well with his detective skills.  And, as Batman joined the Justice League of America, it became time for Robin to find some young super-powered friends as well! 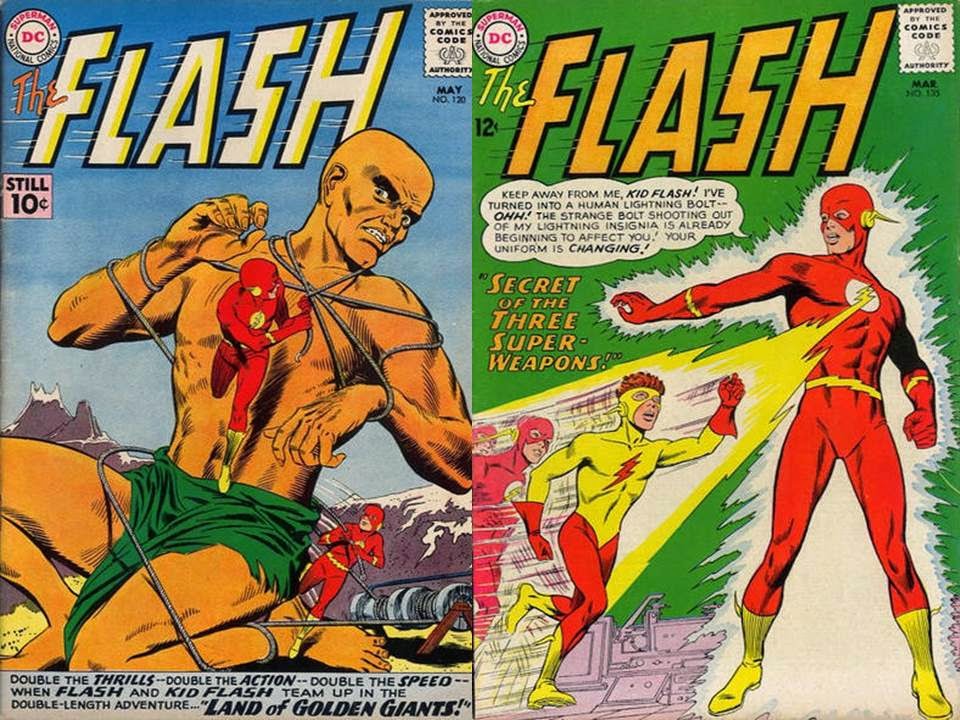 Kid Flash started as Wally West, who was just the nephew from Blue Valley to Iris West of Central City, and a fan of the heroic doings of the new hero, the Flash.  Then, with Flash #110 (December-January 1959, by John Broome and Carmine Infantino), things changed as Iris brought the boy to her home to meet…police scientist Barry Allen.  Wally was not impressed, but that changed in a hurry.  Barry was able to introduce the lad to his “friend” (really, Barry’s own alter-ego, of which Iris was unaware of at the time) the Flash! 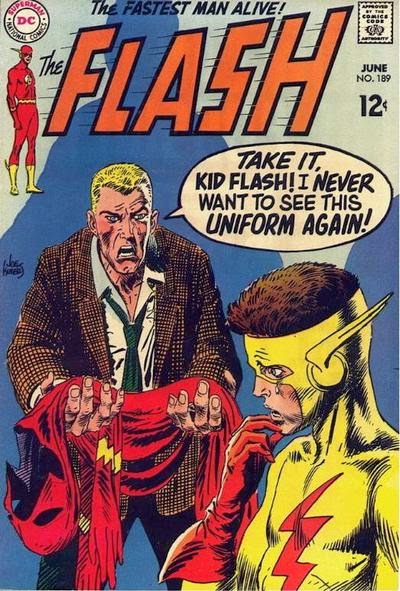 Meeting the Flash changed young Wally’s life…as the lab accident that happened to Barry was repeated with the lad, and he too gained super-speed.

At first, taking the name of Kid Flash, Wally wore a costume similar to his idol (but smaller), until it was changed into the look better know with Flash #135 (March, 1963, also by Broome and Infantino)…pretty much the way it happened on the cover.  Establishing his independence from his mentor was the first step this speedy lad needed to prepare himself for joining a group as his mentor did when he co-founded the Justice League!

Prince of the Seas 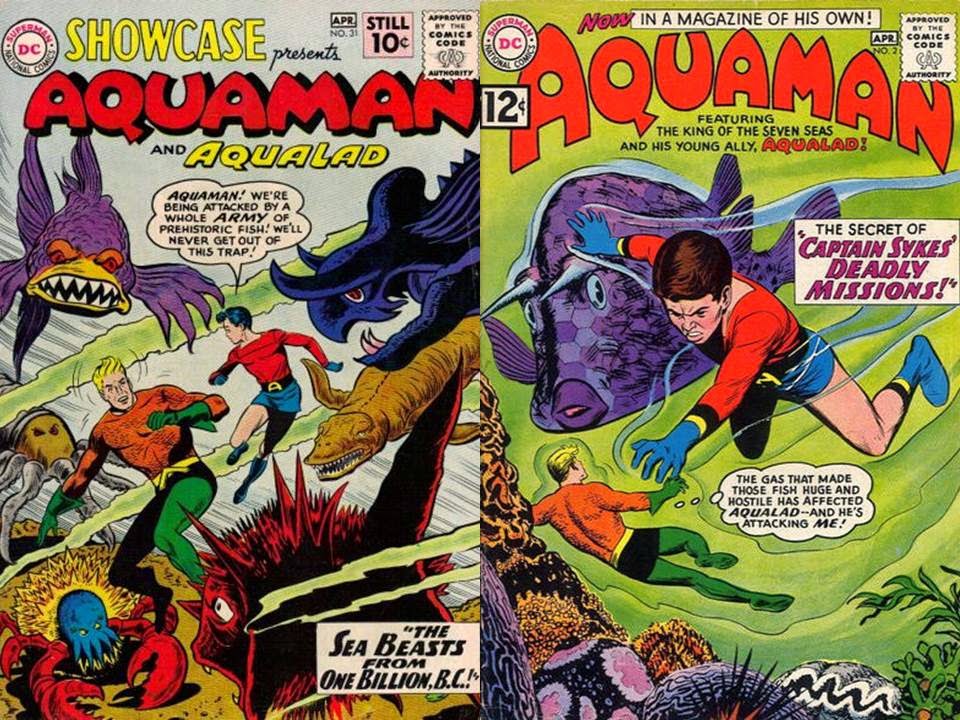 Aqualad started small in Adventure Comics #269 (February 1960 by Robert Bernstein and Ramona Fradon) but quickly grew in importance!  Found by Aquaman, young Garth was just “The Kid From Atlantis!”…but he really was so much more.  The future Aqualad had been taken to land because he had purple eyes (a trait that suggested there was something wrong with the boy) as well as a fear of fish (quite the problem for an undersea dweller!).  Aquaman, himself no stranger to being exiled from Atlantis (he, because of his blond hair), helped the boy to overcome his fears by working with him (as well as Aquaman’s own pet octopus, Topo). 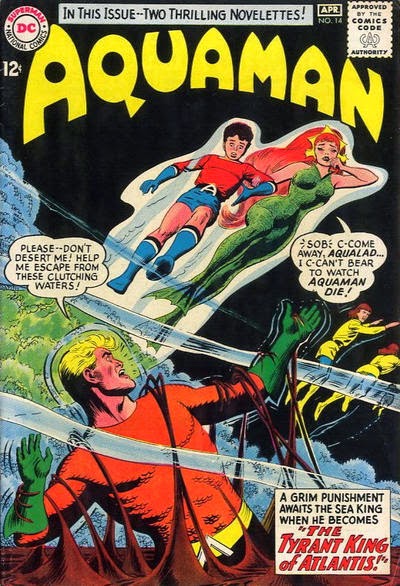 The two then wandered the seas, fighting crime and looking for a place to belong….which Aquaman found, when he returned to Atlantis as its king (bringing the orphaned Aqualad with him), and as a co-founder of the Justice League, Aquaman had a group of friends besides the boy (as well as his new girlfriend, Mera)…so, it’s time for Garth to meet up with others as well.


This all happened with Brave and the Bold #54….but, even after defeating Mr. Twister, the youngsters didn’t form the Teen Titans.  Their next appearance en masse (and the first appearance of the Teen Titans) was in Brave and the Bold #60 (June-July 1965, also by Bob Haney and Bruno Premiani), and it also included Wonder Girl (who was making her first appearance here as well, as a younger partner of Wonder Woman that Diana and her mother, Hippolyta, allowed to leave Paradise Island and join the boys in this adventure)….as the already formed team was facing the menace of the Separated Man in the town of Midville! 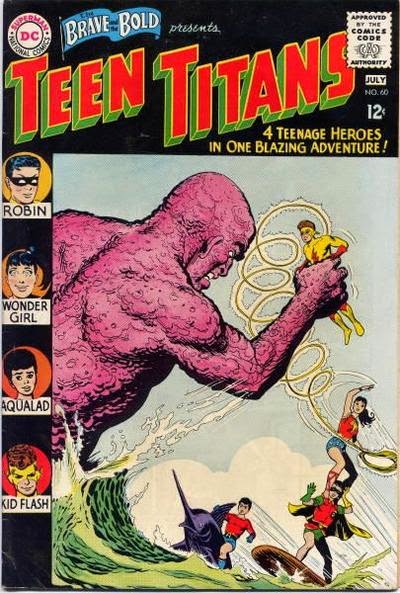 How groovy is that?  (Hey, it was the nineteen sixties…people were much more down with that hip lingo…or least, so writers thought.  Still, it gave the series a unique flavor…).

But, who was Wonder Girl?  And, weren’t there other heroes around with sidekicks that could have been members?  And what of the young hero, Superboy?

Well, those answers came later, and, thus, we’ll take a break here and bring you those answers sometime in the future as well!
Posted by Dave's Not Here Comic Blog at 6:00 AM