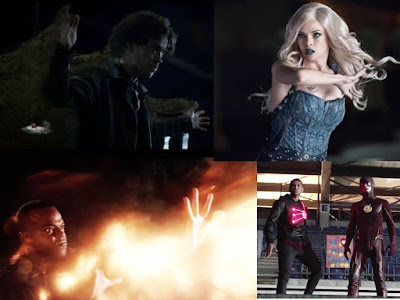 The CW Flash TV Show has been introducing a few villains lately, and these are a few of the ones seen recently...but, their comic book origins came from the Firestorm comic!

Let's take a look at the Sand Demon, Tokamak and Killer Frost through the pages of DC Comics! 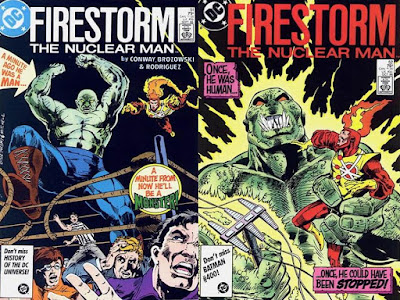 Eddie Slick was just a degenerate gambler, that happened to look like Martin Stein (half of the Firestorm hero, along with Ronnie Raymond).  Eddie managed a wrestler named King Crusher, who got some bad drugs and turned into a monster...looking for revenge on Eddie, but instead found Martin Stein in Fury of Firestorm #51 (September, 1986) by Gerry Conway and Joe Brozowski.  Firestorm forms, and attempts to stop King Crusher, and cure him as well in Fury of Firestorm #52 (October, 1986). 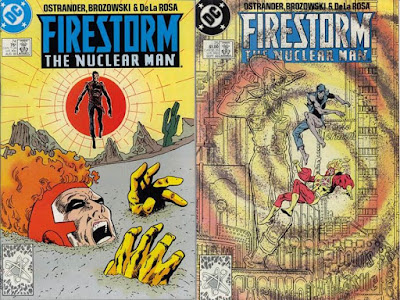 These losses were enough for the mob to want to "take care of" Eddie, whose dead body they dumped in the deserts of Las Vegas, where Eddie revived as the Sand Demon, to take on the Ronnie Raymond/Mikhail Arkadin Firestorm in Firestorm, the Nuclear Man #74 (August, 1988) by John Ostrander and Joe Brozowski.  Firestorm was worried that this was Martin Stein, so it took him a little longer to take down this villain who manipulated sand....but Firestorm ended the undead menace, saving Las Vegas (all in Firestorm, The Nuclear Man #75 of September, 1988!).  Ronnie soon found Martin as well!  How this related to the original Flash is a bit of a mystery, but Jay Garrick did face sand creatures in All-Flash #22 (April-May, 1946), which was represented in Four-Star Spectacular #1 (March-April, 1976)...so check my Golden Age Flash reprint guide for more info on this! 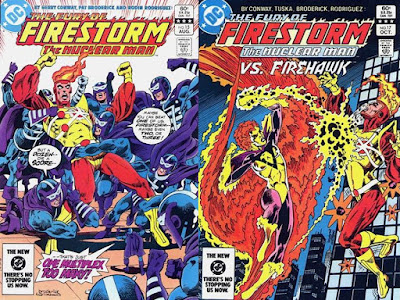 Henry Hewitt was wealthy, but all that wealth couldn't protect his health, as Henry had no immunity to diseases, making him very vulnerable (as shown in the Fury of Firestorm #15 of August, 1983, by Gerry Conway and Pat Broderick).  Henry used his Hewitt Corporation to found the 2000 Committee to take over the world, and try to save himself in the process.  First, Hewitt tried to use Firestorm's first foe, Multiplex, to recreate the conditions which created Firestorm, testing them on Senator Walter Reilly's daughter, Lorraine, turning her into Firehawk (in Fury of Firestorm #17 of October, 1983)... 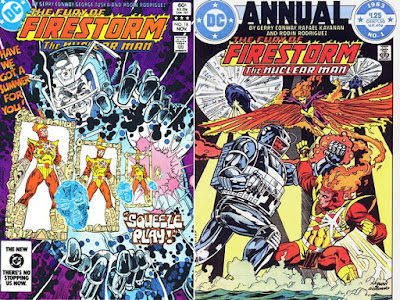 ...then on himself in Fury of Firestorm #18 (November, 1983, written by Gerry Conway, with art by George Tuska), and his battle with Firestorm using his new nuclear powers continued into the Fury of Firestorm Annual #1 of 1983, in which Firestorm cracked Tokamak's suit, causing him to fade away (though he did appear in the Crisis On Infinite Earths #10 of January, 1986, working for Luthor and Brainiac, so something likely saved the man who was a living nuclear reactor). 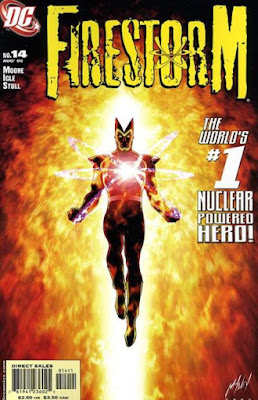 Tokamak later returned in Firestorm #14 (August, 2005) by Stuart Moore and Jamal Igle, creating a new villain out of Dr. Julius Hastur (that of the Pionic Man, for the pions that the physicist turned into, which were fading away until Hewitt made him a containment suit) for a new Firestorm (Jason Rusch)...

...but there wasn't much of an explanation for the return of Tokamak.... 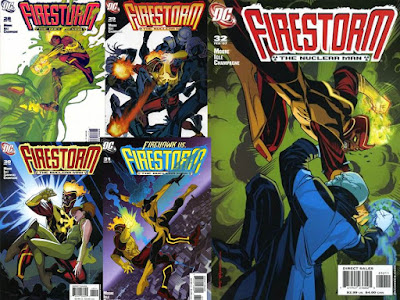 Then, Tokamak continued his vendetta against Firestorm in Firestorm the Nuclear Man #28 to #32 (October, 2006 to February, 2007), with Firestorm the Nuclear Man #31 (January, 2007) explaining how Henry survived, cloning himself and merging with the clone (and pretending to be his own son, Victor, to inherit his own money), as well as creating an army of cybernetic Dollies to aid him, getting Firestorm to accept Gehenna (a female clone he hyper-aged to keep as a daughter) to manipulate Firestorm, then worked against Martin Stein, Pozhar (Mikhail Arkadin's separate nuclear-powered identity) and Firehawk, and using a giant energy collecting Dollie to try to absorb the world's energy for himself, stopped only when Firestorm separated Henry from his clone (letting Henry die from his original radiation poisoning). 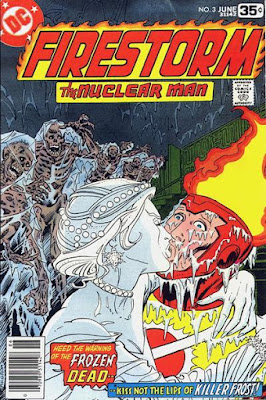 Crystal Frost first appeared in Firestorm #3 (May, 1978) by Gerry Conway and Al Milgrom in the story "Kiss Not The Lips of Killer Frost" (which Firestorm was learning on the cover).  Crystal was a student at Hudson University, felt unloved and scorned by all men, except for her professor, Martin Stein, who encouraged her (and she held a unrequited love for).  Later, when Stein met her at a project in the Arctic, she found out he didn't love her, fell back on her inferiority complex, and then ended up in the thermofrost chamber (which transformed her into Killer Frost, a villain with a need for heat....that froze everything around her, including Martin Stein, saved only by being a part of Firestorm, who formed and Ronnie Raymond and Martin found a way to freeze the girl, stopping her rampage). 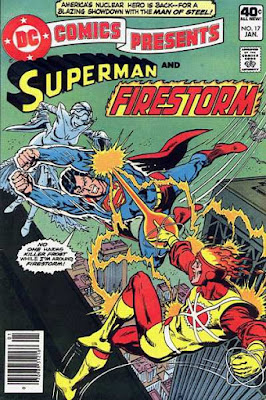 The scientists at S.T.A.R. Labs asked Superman to free Killer Frost with his heat vision in DC Comics Presents #17 (January, 1980 by Gerry Conway and Jose Luis Garcia-Lopez), with Martin Stein trying to stop them (as always, they should have listened to Martin as Killer Frost got free, turned the scientists and Superman into her slaves, and were only stopped by the newly reformed Firestorm...

...who so impressed Superman that the Metropolis Marvel recommended the Nuclear Man for membership in the Justice League of America, which more can be read on here!). 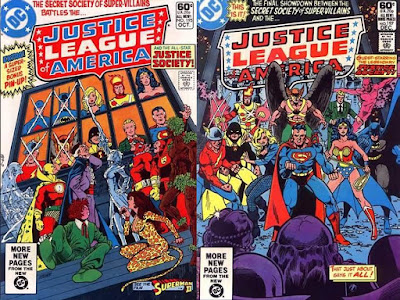 This led to Killer Frost joining the Secret Society of Super-Villains under the Ultra-Humanite (in Justice League of America #195 to #197 in October to December, 1981, by Gerry Conway and George Perez) with villains like the Mist, Rag Doll, the Signalman, Brain Wave and more, only to be defeated by the JLA and JSA. 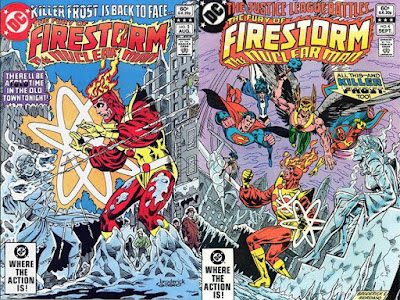 Killer Frost got loose when she was brought to trial in Fury of Firestorm #3 and #4 (August and September, 1982 by Gerry Conway and Pat Broderick), and fought Firestorm (and then a group of Justice Leaguers including Superman, Wonder Woman, Hawkman, Zatanna and Red Tornado as well). 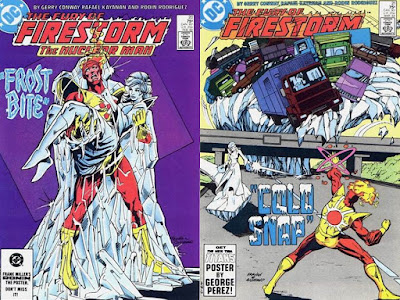 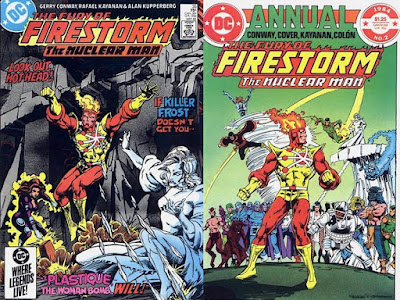 Other Firestorm villains have appeared on Flash as well, including Firestorm's first foe of Multiplex, and his explosive female foe of Plastique, and even the Flash foe, Pied Piper, that faced Firestorm in his Fury of Firestorm title and they've been covered in previous Flash Facts!