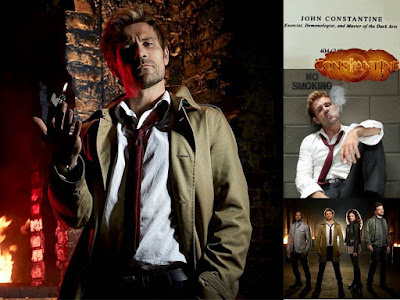 Likely you've heard of the short lived NBC TV show, Constantine, developed by David S. Goyer and Daniel Cerone, with Matt Ryan as the title character, John Constantine..
...."exorcist, demonologist and master of the dark arts" (not to put on airs)....but, here's a little on the DC Comics history of the character that Matt Ryan looked like he stepped off the pages from... 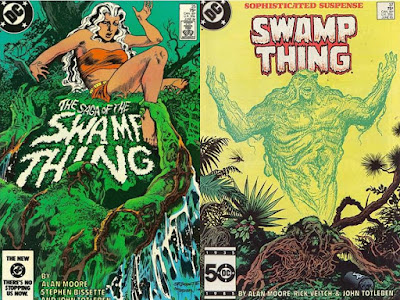 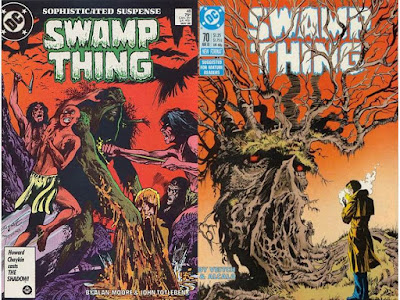 A master manipulator, a man who knew a little of every type of magic, working to sort out his own personal demons to save the Earth and every one on it (and doing it with a bit of English style, but not too much, because John was also a working class man....with all the vices and virtues that come with that, such as dealing with an early failure of his in Newcastle, where he messed up the lives of friends of his like Gary Lester, Anne-Marie, Benjamin Cox, Frank North and Ritchie Simpson, all while failing to save the life of a young girl named Astra from the demon Nergal). 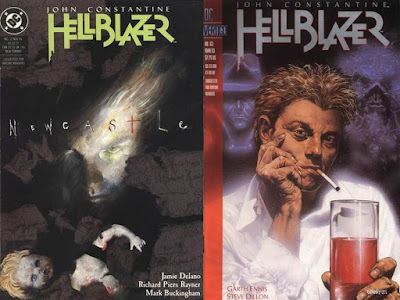 John ended up proving to be quite popular, so much so that he moved up from being a supporting character (showing off connections to other magicians, like Zatanna, and even heads of business like Steve Dayton, who was also the man called Mento, husband of Elasti-Girl of the Doom Patrol and guardian of Beast Boy/Changling of the New Teen Titans), popping up during the Crisis On Infinite Earths, and helping Swamp Thing and a cabal of other magicians fight the greater darkness right after.  John even graduated to his own series, called Hellblazer (with the story of Newcastle being related in Hellblazer #11 of November, 1988 by Jamie Delano and Richard Piers Rayner), and with that, gained a supporting cast of his own. 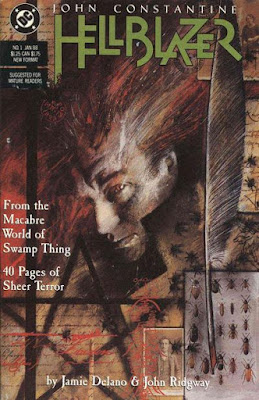 Frank William Chandler (nicknamed "Chas") was one of John's oldest friends, when Chas took in the young John.  They formed a bond which lasted over the decades, even when John led Chas into various mystical troubles (and used him as a roadie for John's punk band, Mucous Membranes), and continued to drive John around in his taxi cab after, getting through the magical madness to go and grab a pint with his mate, all starting with his first appearance in Hellblazer #1 (January, 1988) by Jamie Delano and John Ridgway. 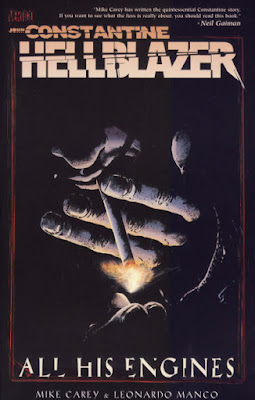 One of the best examples of their friendship came in the stand alone graphic novel of 2005, John Constantine: Hellblazer - All His Engines, by Mike Carey and Leonardo Manco, wherein John and Chas  work together to save Chas' granddaughter, Tricia, from demonic sleep brought about by an evil demon, much to the frustration of Chas' wife, Renee, and Tricia's mom, Geraldine...

....though, fair warning, this is not a tale for kids, as John demonstrates a knowledge of language that wouldn't make it into television, using his sarcastic wit to its fullest, including a few "f-bombs", and quite a bit of gory action...but all part of the regular character of John Constantine. 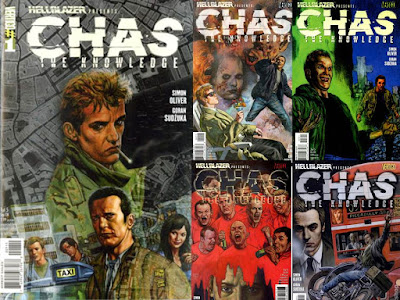 Chas even had a 5 issue mini-series devoted to him, and what he knew of London's streets (called "the Knowledge"), with Hellblazer Presents: Chas - The Knowledge (starting in July, 2008), facing off against the demon Tuma'el, with other friends besides John (who was busy at the time) in this series by Simon Oliver and Goran Sudzuka. 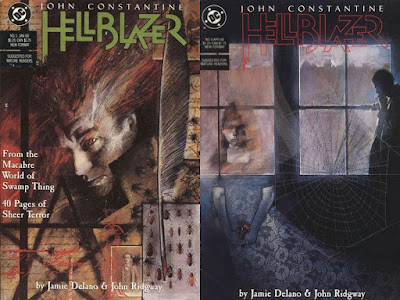 Zed was a girl developing magical powers, poping up briefly in  Hellblazer #1 (January, 1988) by Jamie Delano and John Ridgway, before a full appearance in Hellblazer #4 (April, 1988, also by Delano and Ridgway), where John picked up Zed, but they were interrupted when John's niece, Gemma Masters, has gone missing, whom Zed helps him locate via a drawing of the house she was in that Zed was able to divine.  Zed then gets involved in John's battle with Nergal, with Nergal tainting John with his blood, Zed being held captive by the Resurrection Crusade and Zed's father, Elder Martin (Zed's real name being Mary Martin). 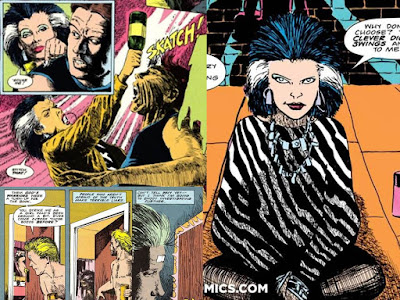 Though John couldn't get Zed to leave the group, he did sleep with her, making her unable to be the mother of the new Christ, and making her useless to the group (Zed's early stories can be found in the John Constantine Hellblazer: Original Sins and John Constantine: The Devil You Know tradepaperbacks).

Zed returned briefly to John's life, as a pagan sorceress living in Scotland. 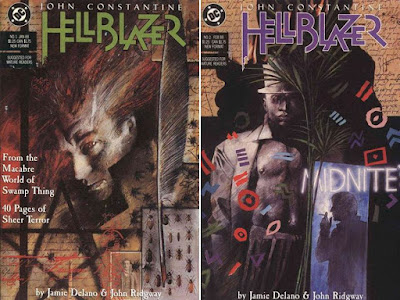 Papa Linton Midnite was a Jamaican voodoo priest living in New York when the readers first met him, and John gave him Gary Lester to watch over while fighting the hunger demon, Mnemoth in  Hellblazer #1 and #2 (January and February, 1988) by Jamie Delano and John Ridgway, with this battle not ending well for Gary. 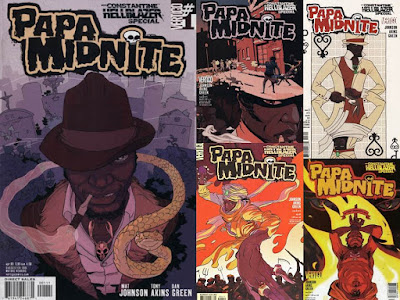 Papa Midnite's history was expounded about in Hellblazer #72 to #75 (December, 1993 to March, 1994) by Garth Ennis and Steve Dillon, and later in a 5 issue mini-series by Mat Johnson and Tony Atkins in 2005, called John Constantine Hellblazer Special: Papa Midnite, giving depth to this foe (and sometime ally) to John Constantine.

First of the Fallen 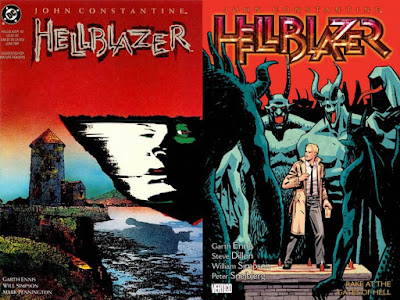 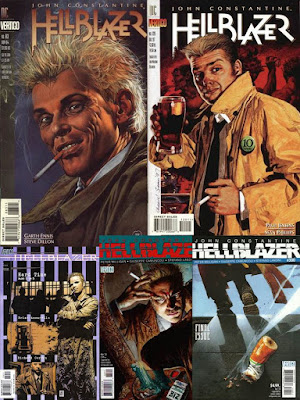 John Constantine's original run lasted for 300 issues, to April, 2013, thumbing its nose at proper behavior, yet always having something interesting to say as John fought his inner demons and those without all over the DC Universe (though mostly in its own separate Vertigo corner)...


....dealing with the things no one wants to talk about with a British wit and smoking talent (though his smoking did cause him pain....).

John even showed up here and there in the regular DC Universe, putting in the occasional cameo in the Spectre, in Swamp Thing and Sandman, getting name checked during Underworld Unleashed, even in an issue of Challengers of the Unknown.... 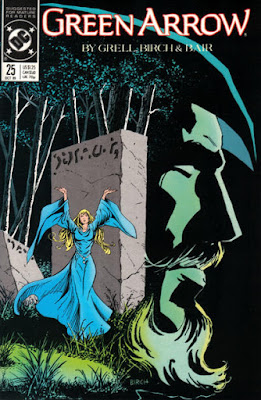 
...originally meant to be part of a longer story, that story didn't happen, but the two-page cameo was kept, with John and Ollie meeting in a pub, John giving Green Arrow directions, and Ollie found a non-mystical solution in the next issue, ending this storyline all too quickly.


Both Green Arrow and John Constantine would find themselves adapted to television.... 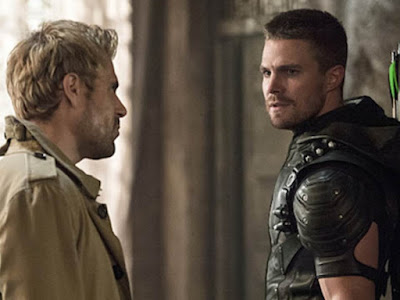 Still, Constantine had a 13 episode series on NBC in 2014 and 2015, which also ended quickly, but thankfully it was NOT the end of Constantine, as Matt Ryan's version showed up on the 5th episode of season 4 of Arrow (entitled "Haunted"), with fans hoping that Constantine magic will allow Matt to be Constantine again!

Posted by Dave's Not Here Comic Blog at 9:00 AM