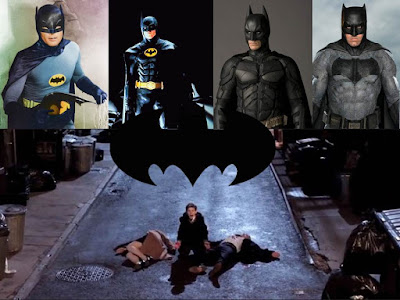 You think you know the story. After all, even when he teams with Marvel heroes, Batman’s story is pretty straight forward.

Young Bruce Wayne, going home with his parents….only to see them killed by a mugger, and he adopts the mantle of the Batman….or does he? Get ready for a step into the Twilight Zone! (or, the DC equivalent…their tales of Elseworlds…tales that seem familiar, but are also not!). 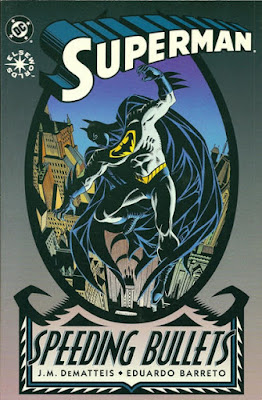 In the 1993 Elseworlds, Superman: Speeding Bullets (by J. M. DeMatteis and Eduardo Barreto), young Kal-El was rocketed to Earth….and found by Thomas and Martha Wayne! Naming their son Bruce, he grew up unaware of his powers, until the day a mugger killed his parents, incinerating the thief with his heat vision.

Later in life, Bruce does grow up to become Batman, who uses his powers to attack the villains of Gotham, including some joker named Lex Luthor (a brilliant scientist who was disfigured and driven insane). Eventually, with the help of Lois Lane, the super-powered Bruce gives up the Batman identity to become Superman. 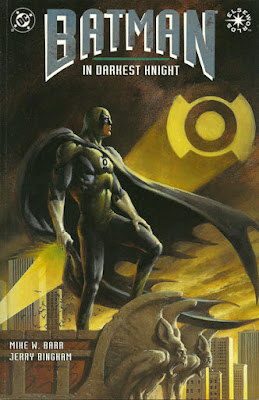 In 1994, with the Batman: In Darkest Knight (by Mike W. Barr and Jerry Bingham), Bruce had just returned to Wayne Manor after an unsuccessful attempt to strike fear into the hearts of criminals, and was looking for a symbol to inspire him. At that point, a ghostly green image appeared, taking him to the spaceship of a dying Abin Sur…who gives him the power ring of the Green Lantern.
With this ring, Green Lantern Bruce Wayne is able to stop the Red Hood, and is later summoned to take the power ring from the power mad Green Lantern Sinestro. GL Bruce Wayne also finds the killer of his parents with the help of Commissioner James Gordon (who does find Joe Chill, but Gordon is killed by Sinestro, who is now in possession of a yellow power ring from Qward, and Sinestro finds Chill, and absorbs his mind!). The Guardians of Universe recruit Clark Kent, Diana and Barry Allen to help Green Lantern Katma Tui stop Bruce Wayne (who they fear is as power mad as Sinestro). 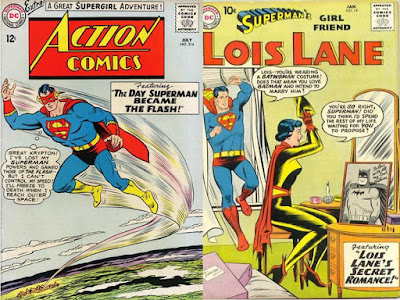 Well, those happened too, but are a tale for another time....