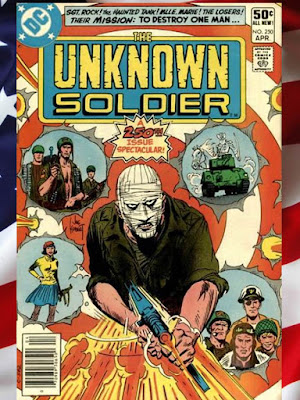 For Veterans' Day, a quieter look at the cover of an issue of the Unknown Soldier, #250 (April, 1981), with art by comic book veteran and hero, Joe Kubert.


The Unknown Soldier was a character that gave up his own identity to fight for the United States during World War II...making the next to supreme sacrifice for us all; in this case, surrounded by friends and uneasy allies of Sgt. Rock and Easy Company, the Haunted Tank, Mademoiselle Marie and the Losers (Sarge, Capt. Storm, Johnny Cloud and Gunner).


A way to remember all those who made the supreme sacrifice, and those that survived the horrors of war as well.