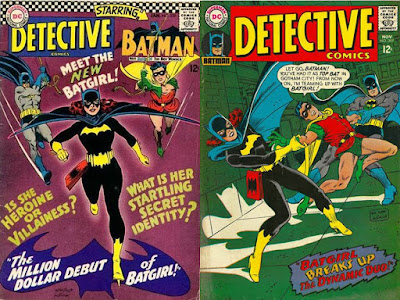 Batgirl started working with Batman back in the day with Detective Comics #359 (January 1967, by Gardner Fox and Carmine Infantino), but there was another man in her life pretty soon.

No, not Robin the Boy Wonder, but the Man of Steel…Superman! 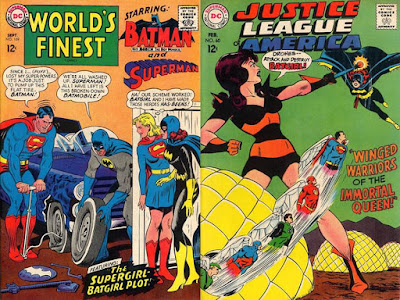 True, they didn’t meet until World’s Finest #169 (September 1967) by Cary Bates and Curt Swan, and barely worked together, being only in Justice League of America #60 (February 1968, against Queen Bee Zazzala by Gardner Fox and Mike Sekowsky) and in World’s Finest Comics #176 (June 1968, where they worked against Batman and Supergirl). 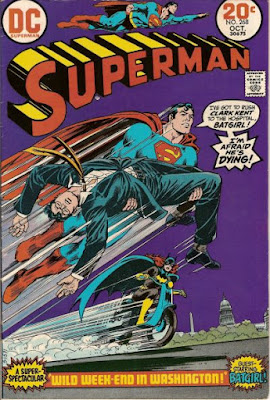 But, she was of interest to the Superman Family…

….and revived with Superman #268 (October 1973) by writer Elliot S! Maggin and artist Curt Swan with a “Wild Week-End In Washington!” (and an astonishing cover by Nick Cardy).


The villainous organization, M.A.Z.E. began a plan against the United States and Clark Kent revealed knowledge of it…prompting his needing rescue from Superman and Batgirl (and yes, Clark Kent IS Superman…there’s quite a tale in those pages! 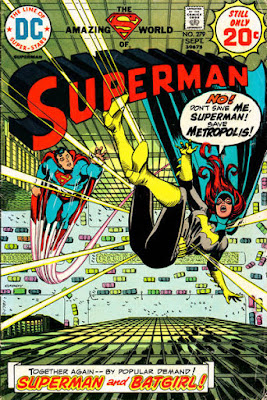 Not content with one appearance, Batgirl returned again with Superman #279 (September 1974, with the same team, and an even MORE stunning Nick Cardy cover!).

Batgirl and Superman worked together to stop a scheme to smuggle oil (boy, wouldn’t it be great if they could do something about oil prices today!).

Both these tales (as well as Batgirl’s earlier solo stories, as well as a few tales with Batman and Robin) are reprinted in the Showcase Presents: Batgirl black and white book. 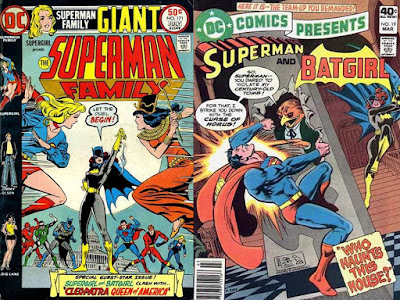 Batgirl stopped in to say hi to Supergirl and "Cleopatra, Queen Of America" in Superman Family #171 (June-July 1975) by Elliot S! Maggin and Curt Swan, before joining Robin in Batman Family (both teaming up with him and some solo tales) for twenty issues (along with Alfred Pennyworth, Man-Bat and Huntress tales along with way, and faced off against M.A.Z.E. again, as well as a few others), before the Batman Family took over Detective Comics (starting with #481, changing to dollar-sized), and only Batgirl survived when the book went back to normal with #497, and she stayed a back-up until #519, with Green Arrow taking over her spot with #521! Barbara Gordon’s alter-ego even met Superman again, in DC Comics Presents #19 (March 1980) by Denny O'Neil and Joe Staton before the Crisis on Infinite Earths (when pretty much everyone had to work together….).

Still, nothing beats the two issue fling Superman and Batgirl had! 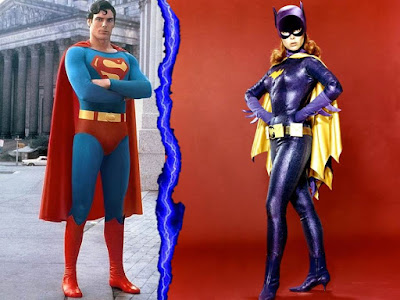 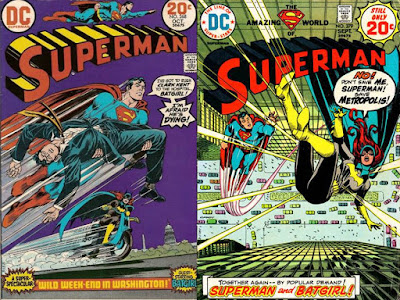 Posted by Dave's Not Here Comic Blog at 3:22 AM