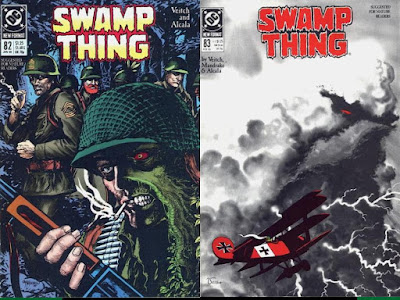 Swamp Thing is not the first person you think of when you think of war comics, but, for two very special issues in 1989, the spirit of Alec Holland was involved in some weird war tales, teaming up with a few characters from the two World Wars as he had sought refuge from an Invasion! of his own (as the Dominators had taken him out of that war, leaving his love, Abby Arcane, on her own). 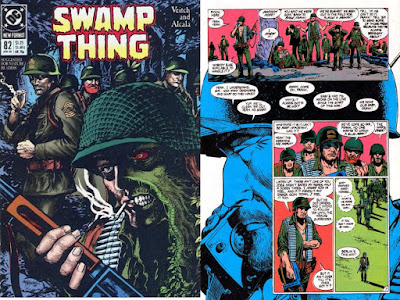 First up, Swamp Thing #82 (January, 1989) under a cover by John Tottleben, in a story by Rick Veitch and Alfredo Alcala, Swamp Thing finds himself waking up in the body of a dead soldier, Alexander Holland, found by Easy Company (and reanimating the body to interact with Sgt. Rock and his crew), earning him the nickname of Lazarus. 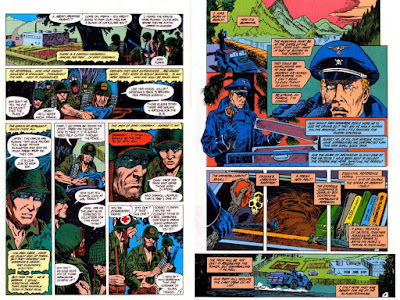 Swamp Thing finds out it is May, 1945, the ending of World War II, and, as a Nazi SS soldier retrieves mystic artifacts from the Castle Von Hammer (including the Claw of Aelkhund sealed behind the wall in the castle with the remains of a French World War I aviator).  Easy Company gets a new assignment, taking out a Nazi meat-packing plant, with Rock and Lazarus going to scout it out. 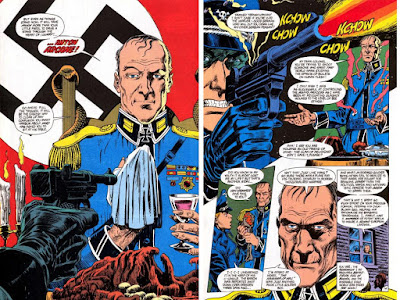 While, next to the plant, Anton Arcane meets the Nazi with the artifacts, planning some supernatural feet with them that would save the dying Reich....yet, Arcane had plans beyond what the Austrian painter had, including a sacrifice of one of the bulls (which had supernatural strength) and taking advantage of this war, as he had the past, to perform medical experiments to prolong his own life, as well as make his inhuman Un-Men.

Rock and Lazarus approached the plant, with Swamp Thing calming a large bull there, with Rock taking that as a sign that Lazarus would unleash the animals as a distraction while Easy Company stormed the plant.  Easy had it easy for once, as a group of allied planes had missed their target and would be able to bomb the plant instead.  Rock went looking for Lazarus, only to find him dead this time (as Swamp Thing had vacated his body, reforming in his usual form, to go after Anton Arcane, who had been his enemy for decades....though Swamp Thing thought they hadn't met yet). 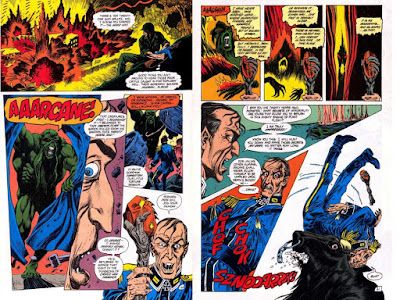 Confronting Arcane, Swamp Thing was dispatched in fire when confronted with the Claw of Aelkhund, and burst into flames, as Arcane was impaled by the bull Lazarus had let free.  Easy Company later found the bull and had a barbecue, yet Arcane had escaped (as he would later menace Swamp Thing soon after his first appearance).  Easy Company's medic, "Pappy", was really the Unknown Soldier, who had a mission of his own, which was to get the mystic items from the Nazis (which he did).

This left Rock and Easy, with Sgt. Rock still wondering when that last piece of metal might fall from the sky, ending the war for him.

Meanwhile, back in the modern day, Abby Arcane was met by Jason Woodrue, the Floronic Man (who was going by Floro now, and working with the New Guardians during the Invasion!), who said he could not find Swamp Thing in the green (the mystic force Swamp Thing worked with to protect the Earth), but Abby still had faith that her husband was alive. 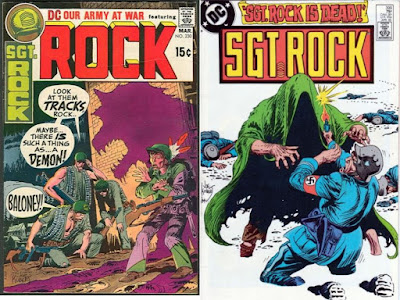 Sgt. Frank Rock and Easy Company had been fighting World War II for decades in the comics, usually dealing with the hard, cold facts of war, but occasionally dealt with some of the supernatural side, working with the crew of the Haunted Tank and even participating in the Crisis with them and the Losers.  Rock represented the "every man" of World War II, and was said to have died with the last shot of World War II. 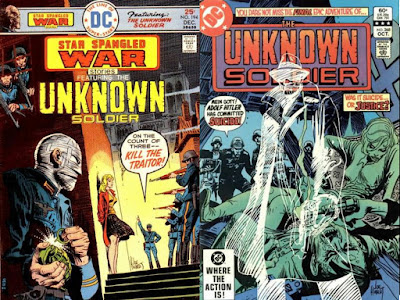 The Unknown Soldier was one of those odd things that Sgt. Rock encountered, being an immortal fighting the German forces behind the lines using his disguises during World War II, and even had supposedly helped finish the war ending the threat of Hitler in the end of April, 1945.

Brothers In Arms, Part One 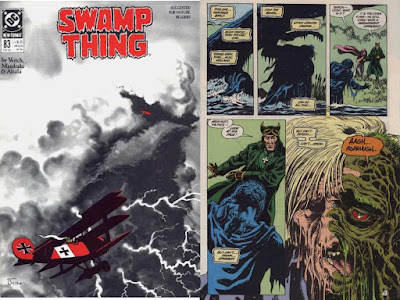 Following Swamp Thing forward put us back in World War I in Swamp Thing #83 (February, 1989) by Rick Veitch, Tom Mandrake and Alfredo Alcala, under a cover by Rick Veitch with a fokker flying into eerily swamp clouds.

Here, Anais Arcane and her two children, Aniela and Gregori, had taken refuge in the castle of her cousin, Baron Hans Von Hammer, noted as the Hammer Of Hell, a World War I flier (for the Germans, thus making him an Enemy Ace) while her husband fought in the war.  The Baron saved Anais and her family from a plane with two pilots while they were walking in the woods, with one French pilot dead and burned, and the other wandering out of the swamp, still alive but misformed (as Swamp Thing had come into his body, but had less success in stitching it back together). 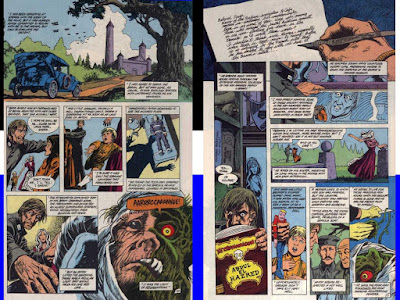 Anais had to go to the medical school her other son was attending, as they had planned to kick Anton out for a host of problems, then went searching for him near the battle front (where Anton was taking advantage of the war to perform human experiments, though his mother only saw that he was "helping"). 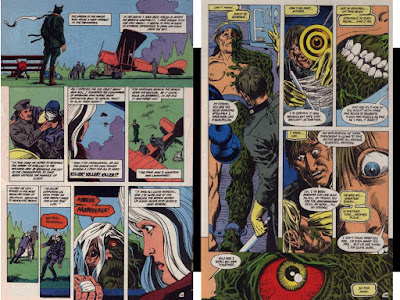 Taking him back to Castle Von Hammer to help the misformed Frenchmen, Anton reunited with his siblings (not a happy one for his sister or brother), and took to experimenting on the wounded Frenchman (who, while recuperating, still was not able to resist, especially after being subjected to torture under Anton's care.....though he recognized this man as his foe, and his mother, who looked like her granddaughter, Abby).

Baron Hammer tolerated Anton's presence for a time as he had given the aviator drugs to help him sleep as he dealt with the horror of air battle, and Anton used the Von Hammer library to further his own occult research. 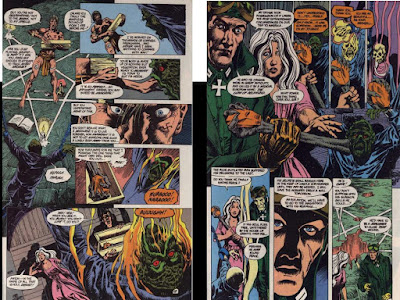 Eventually, Anais caught Anton using the supernatural objects in spells on the Frenchman in a cavern under the castle, and was disgusted by the evil her son was performing.  Anton turned to kill his mother, who was saved as the Enemy Ace had returned just in time to shoot Anton (who wandered off, surviving due to his early experiments in the occult and medicine, now more determined to prolong his life after meeting a strange swamp man for the first time).  Hammer used the Claw of Aelkhund (which his father had gotten decades ago during a trip to America) to dispatch Swamp Thing off in time again, walling up the room under the castle with it and the dead Frenchman's body, as Anais later learned of the death of her husband.

Meanwhile, back in the modern day, Abby was informed by the Phantom Stranger, that Swamp Thing was in neither heaven nor hell after the Dominators' attack, but Abby still believed her Alec was alive (though she would have to deal with her ex-husband, Matt Cable, as his support checks were now ending). 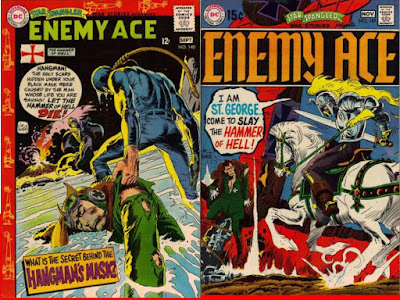 The Enemy Ace was a short running feature of the adventures of Baron Hans Von Hammer, a German fighter pilot of World War I, and how a man who could fight ruthlessly in aviation battles dealt with the fact that he had to kill for his country.  The Enemy Ace had a few odd foes, such as the Hangman and St. George, and even traveled in time, being manipulated by the Lord of Time to fight the Justice League and Justice Society. 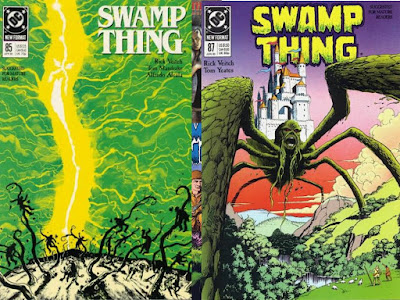 As Abby dealt with her problems waiting for her husband to return to her, Swamp Thing continued to fall back in time, including the Wild West (with Jonah Hex, Johnny Thunder and more), the Revolutionary War (with Tomahawk) and Camelot (and Merlin, the Demon and the Shining Knight).....in a story that, sadly, caused much controversy in its time, with the writer of the story leaving DC after not being able to tell the story in the way he had planned, resulting in a months' long delay as a replacement team had to be found to wrap up the story (close to what was originally planned, but missing a key component).