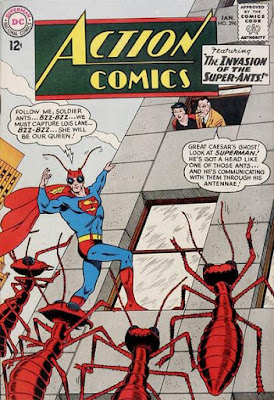 Usually Superman is here to fight the alien menaces which come to plague us, standing as a champion of truth, justice and the American way.

But, in this classic Action Comics tale with cover by Curt Swan and George Klein, Superman joins them (the bad guys), as he turns into an "ant-man", and participates in....

The Invasion Of The Super-Ants! 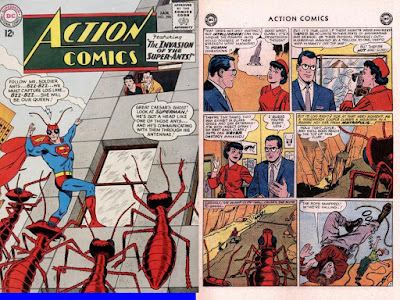 In the story by Edmond Hamilton and Al Plastino from Action Comics #296 (January, 1963), Clark Kent and Lois Lane are checking out the new ant exhibit at the zoo, with Clark extolling the virtues of ant life with how much more they could accomplish if they were human sized (and Lois not so convinced).  Meanwhile, on the outskirts of Metropolis, a newly married couple come across giant ants when hiking, and find themselves trapped on a mountain (until the ants help them out). 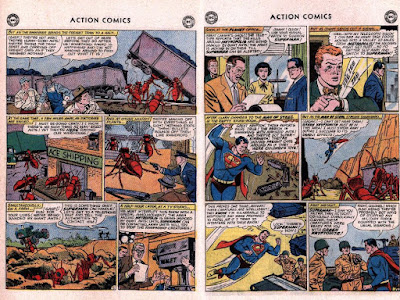 Giant ants are discovered in all the surrounding area of Metropolis, causing trouble where ever they are.  The media put out a call to Superman, who heads out to stop them...but can't, as the ants have green Kryptonite nearby to stop him.  So, Superman checks with the U.S. Army (also sent to stop the ants). 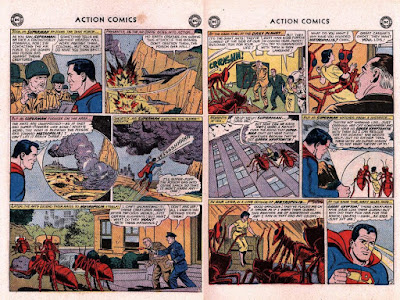 Superman works with them (including Col. Larson) using a lead lined tank, but that plan is stopped as well, as is the army's plans of using poison gas.  The ants continue their raids, finding only certain elements, and then taking Lois Lane from the Daily Planet to be their queen! 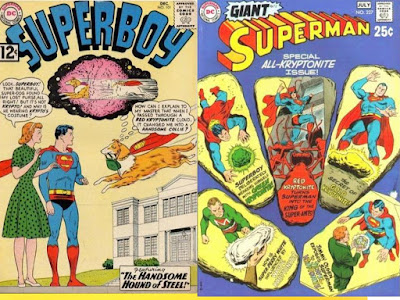 Desperate, Superman heads to a red Kryptonite cloud, and remembering how it affected his dog, Krypto, tries a desperate plan....by becoming partially ant himself!  The red K changed Krypto into what he was thinking of, so Superman gambled he could get ant antennae this way. 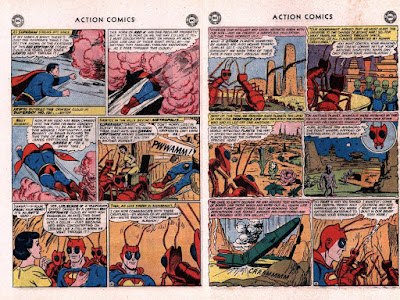 When communicating with the ants, Superman learned they came from a world where the humans had annihilated each other with atomic weapons (which also mutated the ants to become intelligent and human sized).  So, the giant ants then traveled the cosmos, looking to save planets from their own technology.  They had problems here on Earth when their ship crash landed and needed repair....and they took Lois Lane, hoping Superman would then find a way to communicate with them.

As their ship was repaired, even the green Kryptonite was explained (it was their ship's fuel, not meant to harm Superman at all!). 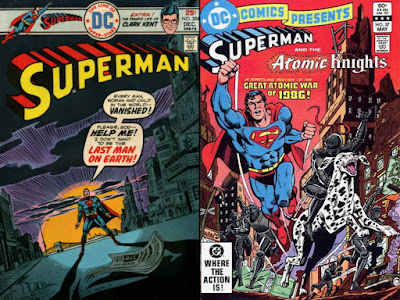 Superman went to the United Nations after, to have them try to avoid a Great Disaster with atomic weapons (though that didn't always work out....as shown here!).