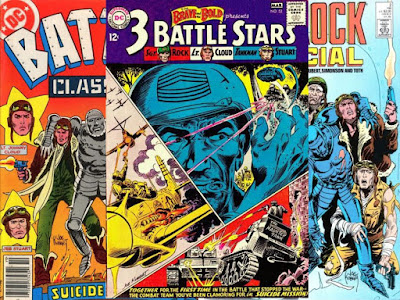 Talking about the greatest generation, and times when they fought for our freedom.

One time brought together the greatest fighters of that generation for their greatest mission....

...and here is that story, from Brave and the Bold #52 (February-March, 1964) by Robert Kanigher and Joe Kubert (under a cover by Kubert), when they had to work together on a... 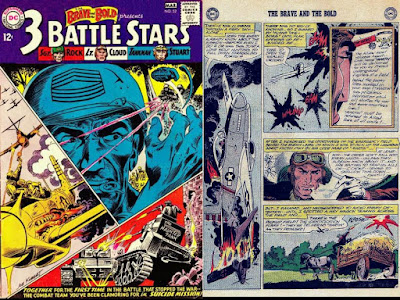 An agent needed behind the lines in World War II, so the United States sent its best flier, Johnny Cloud, on a secret mission to retrieve the hero (but, with a plan so secret, his plan had a bomb implanted, rigged to explode to prevent capture).  After a pitched battle against Nazi fighters, Cloud landed his P-41 to find the informant, code named "Martin", sealed in an iron suit, as a torture by Nazis who had captured him. Still, the resistance helped the agent escape with vital information, but had no time to remove the suit.  To allow Cloud and Martin to get into the air, the resistance fighter sacrificed his life fending off attacking Nazi troops.  In the air, more planes attacked, but Cloud was saved when a tank joined the fray, taking out the last Nazi fighter. 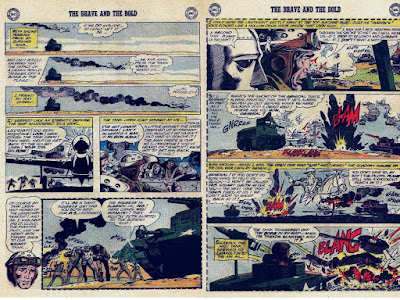 After landing carefully (to not trigger the explosives), Cloud and Martin had to hurry to get into the M-3 (the Haunted Tank of Jeb Stuart), as they provided cover for Nazi troops who had been attracted to the air battle.  The troops were little trouble for Stuart and his crew, but soon, a Nazi Tiger tank arrived, bringing more trouble than they could handle.  Still, Stuart went for advise from his ghostly Civil War namesake (who only he could see and hear), and led the Tiger to crashing into Cloud's plane, which exploded on impact, taking out the Tiger.

Stuart, Cloud, Martin and the crew were rolling on, with the ghost giving Jeb the advice of needing a rock of strength....which, after an encounter with another Tiger tank, they needed.  Sgt. Rock and Easy Company approached, being drawn in by the tank battle. 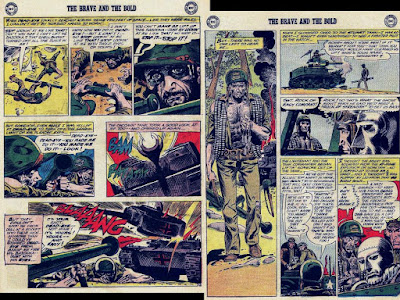 Rock and bazooka holding Dead-Eye could decide the fate of the mission, having to take down the Tiger, but enemy fire weakened the two men....yet, as he was dying, Dead-Eye wouldn't stop staring at Sgt. Rock....which gave him the strength to lift the bazooka, firing it and taking out the Tiger tank.

Rock, Stuart and Cloud had to take "Martin" away on foot, finding the iron suit too hard to manage, finally freed the agent from it....to find out that it was French resistance fighter Sgt. Rock had met before!  The four continued on, being found by another Nazi tank....where the commander wanted to know which of the four was "Martin".  They all claimed to be...distracting him long enough for Sgt. Rock to dive under the tank and use the remaining bazooka shells to blow up the tank. 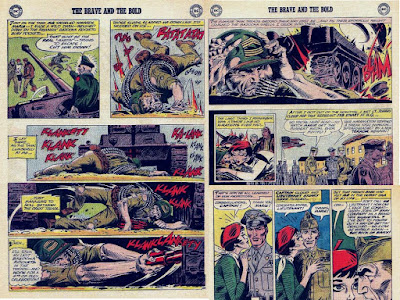 The team was able to deliver the agent to the Allies, where the information delivered was able to stop a Nazi terror invasion.  This work and sacrifice resulted in Rock and Stuart being promoted to Lieutenant, and Cloud to Captain....yet Frank Rock was already working on getting demoted, as he only ever wanted to be a sergeant, and top kick of Easy Company.

Now, some quick files on the men of this mission (with a reveal of who was behind the iron mask at the end!). 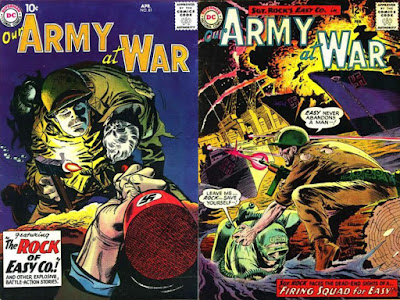 Sgt. Rock premiered in Our Army At War #81 (April, 1959) by Robert Kanigher, Bob Haney, Ross Andru and Michael Esposito) but became the Sgt. Frank Rock of Easy more readily recognized about two issues later.  The son of a miner, who became a boxer, then worked at a steel mill, Rock enlisted, and embodied the fighting spirit of the average American, finding leading men into battle to be where he truly belonged. 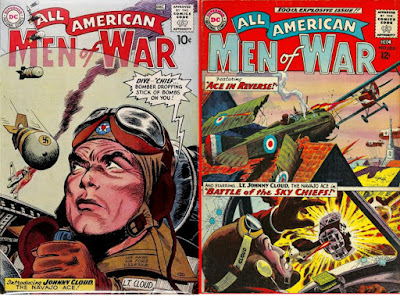 Johnny Cloud premiered in All-American Men Of War #82 (November-December, 1960) by Robert Kanigher and Irv Novick,  Johnny was the son of a Navajo Indian Chief, who called his boy "Flying Cloud", who took inspiration from the clouds.  Johnny suffered discrimination in the air corps, yet became a lieutenant, and leader of his squadron, after dispatching the enemy fighters who attacked his squadron, fatally wounding their leader, Mack, who recommends Johnny as the new leader of the squadron, now nicknamed the Happy Braves.

Jeb Stuart of the Haunted Tank 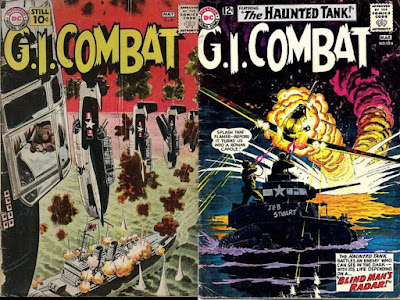 Jeb Stuart and his haunted tank premiered in G.I. Combat #87 (April-May, 1961) by Robert Kanigher and Russ Heath (though not on that first cover), with Stuart and his M-3 crew going into battle against a Nazi Tiger tank team.  The M-3 was lighter and more maneuverable, taking out the more powerful Nazi tanks, with a little help from the ghost of Civil War General Jeb Stuart (a forefather of Jeb's, and spiritual protector of the tank).  Later, the ghost would appear to Jeb, giving him advice which allowed Stuart and his crew to fight well in World War II. 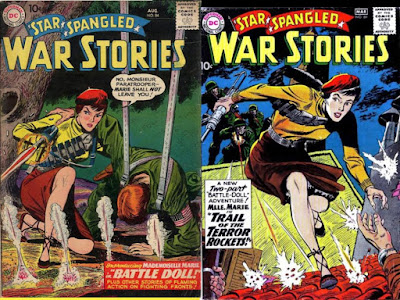 The "man" in the iron suit was really a doll....a French resistance fighter named Mademoiselle Marie, who premiered in Star-Spangled War Stories #84 (August, 1959) by Robert Kanigher and Jerry Grandenetti, Marie had many missions in France, trying to free her occupied land from the Nazis who had unjustly taken their land.  Marie fought on even after many sacrifices, including her father (though she seemed to lose a father many times, a bit of contradiction in her stories).  Marie even lost her own series, but continued to aid the Allies, popping up to help Sgt. Rock and Easy Company in Our Army At War #115 before her appearance in B&B. 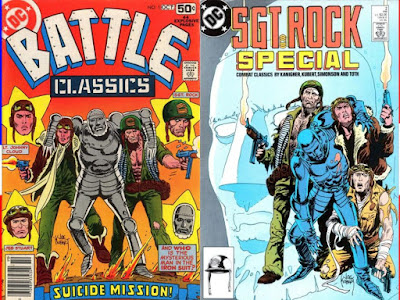 This "Suicide Mission" was reprinted many times, including in Battle Classics #1 (September-October, 1978) and Sgt. Rock Special #2 (1988), both with covers by Joe Kubert, detailing the hard work that our armed forces must endure to protect our freedom! 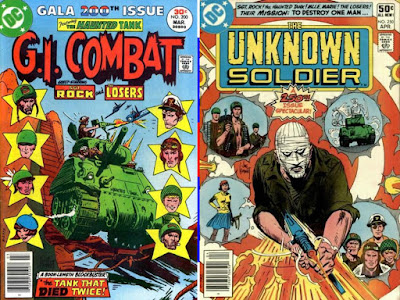 These heroes would also join forces many times in the future as well (with additional heroes, like the Losers and the Unknown Soldier), keeping an ever vigilant battle against the forces of evil, to prevent them from winning the fight, no matter the sacrifice.