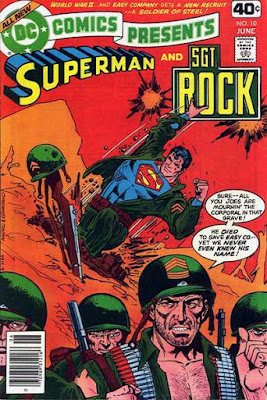 Super-heroes and soldiers seem an odd mix, but it did happen quite a bit in the comics.

The gold standard of super-heroes was Superman, and the best of the war comics featured Sgt. Rock....

...so, here is a simple tale of the time these two characters met under a cover by Ross Andru and Dick Giordano!

The Miracle Man Of Easy Company 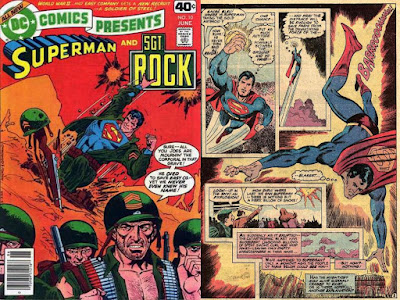 Cary Bates, Joe Staton and Jack Abel gave us the story from DC Comics Presents #10 (June, 1979), starting off in modern day Paris, with Superman getting an award for saving the city from an asteroid.  But, the award was booby trapped with a bomb, which Superman couldn't just throw away (as it was also coated with an adhesive strong enough to hold it to Superman).

To save Paris, Superman flew into space above it....and disappeared when the bomb went off.  Superman awoke on the ground in Paris of 1944, seeing two Nazi soldiers taking off their American soldier disguises, yet found...he could not remember his own name! 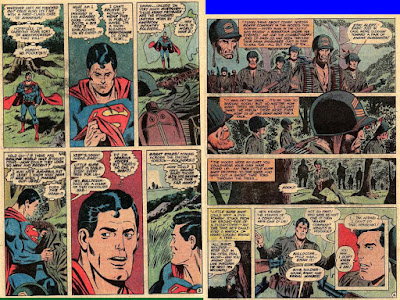 Looking at his outfit and realizing this would look odd to people, he appropriated one of the American soldier uniforms (wondering why there were fresh WWII uniforms on the ground....at least remembering he was from 1979), and heard (from an impossible distance) approaching American soldiers.  The soldiers were the combat happy joes of Easy Company, led by Sgt. Rock, who were looking for Nazi saboteurs disguised as American soldiers (they had already dispatched all but two of them).  The soldiers found the amnesiac Superman, and questioned him, not sure about his lack of memory, but took him in (fending off a Nazi attack).

Superman answered enough of Easy's tests to lay some of their fears to rest (but, now Sgt. Rock was unsure whether this new Tag-Along would be able to perform under combat).  Soon, the troop was set upon by a Tiger tank, with Tag-Along holding the bazooka, which he was ready to fire....but didn't (Superman had a code against killing).  In frustration, he hit the ground, which caused a chasm, that engulfed the tank (Superman didn't know his own strength). 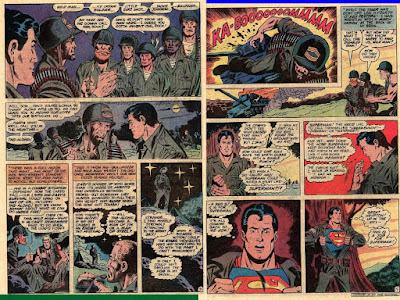 Easy Company took take of the Nazis in the tank, while Tag-Along started to wonder about his powers, thinking about Nazi Supermen....and realizing he was Superman.  Just in time, as Easy Company was now set upon by a Nazi fighter plane (but, the now fully super Superman snagged the bomb it dropped before it got to the troops).  Superman then set the plane down out of range and froze it.  Superman was wondering why Rock's Easy Company was such targets....and realized he was at fault.  In the gear he took to be Tag-Along, was a Nazi transmitter so Easy Company could be tracked.  So, to even up history, Superman put a little super-scare into the local Nazi commandant, then faked Tag-Along's death (allowing Easy to bury him) so they could go on in their own natural history before Superman returned to his own time (to find out how he got here in the first place!). 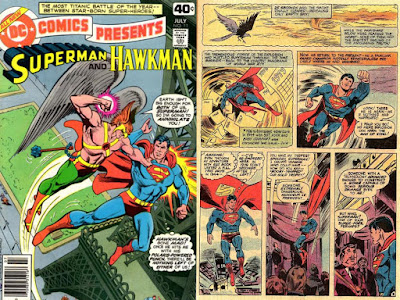 It was in the next issue where Superman found out who planted the bomb, all in a team-up with Hawkman...all in a wonderful tale summarized here (along with a few other the Hawkman and Superman team-ups!). 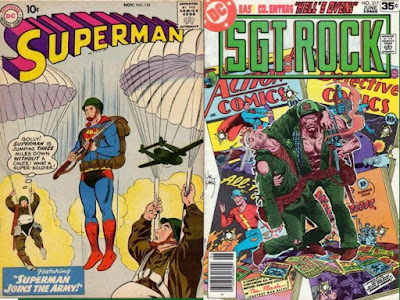 This tale brings up a few odd thoughts...where did Superman get his military training?  (He did have some when he joined the army, back in Superman #133).

Why wouldn't Sgt. Rock and Easy know super-heroes?  (While on Earth-2, super-heroes were contemporaries of World War II, on Earth-1, Superman was one of the first heroes, who first appeared only relatively recently....with super-heroes only the things of comic books!).

But, just enjoy this tale as the simple one that it was, as dedicated to Jerry Siegel, Joe Shuster, Robert Kanigher and Joe Kubert!