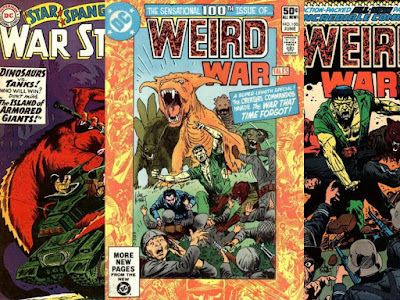 Chocolate and peanut butter are two great things.  Each of them are made better by combining the two...and the same can be said about series set in World War II.

Two of the oddest features of World War II combined for an issue, when the Creature Commandos ended up on Dinosaur Island, fighting the War That Time Forgot in Weird War Tales #100 (June, 1981) by Mike W. Barr, Bob Hall and Jerry Ordway (under a cover by Joe Kubert). 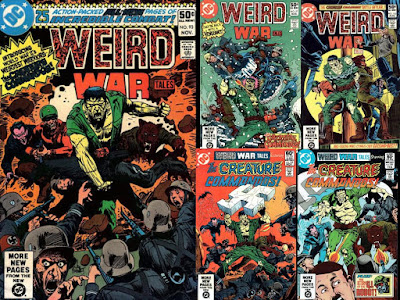 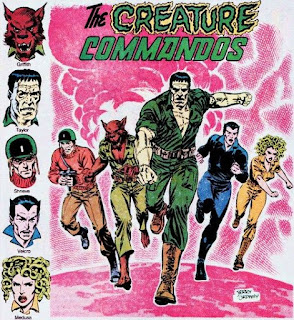 ...taking convicted con man Sgt. Vincent Velcro and injecting him with experimental chemicals including the blood of vampire bats until he manifested the ability to turn into a bat, with a desire for human blood (though no weakness to the sun or religious iconography); Warren Griffith, a 4F young man from Oklahoma who suffered from the belief he was a lycanthrope, and giving him treatments to make him change into a wolfman at random (not controlled by the moon) and Private Elliot "Lucky" Taylor, who stepped on a land mine on a Pacific island, yet was reassembled as a super-strong, silent patchwork man; with these men turned monsters led by Lt. Matthew Shrieve (whose lust for battle could make him the most monstrous of them all). 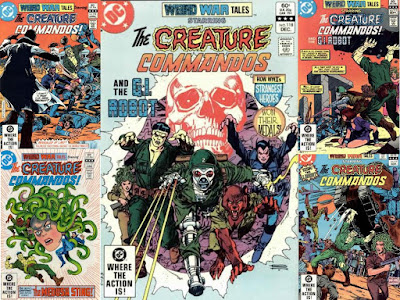 The group continued as the main feature of Weird War Tales after this issue, missing only a few issues, adding a Dr. Medusa to their ranks, as well as teaming up with both versions of the G.I. Robot, right up until the end of the series with Weird War Tales #124 (June, 1983), where they were shot into space (later to be picked up by Brainiac and returned to Earth by Superman).

The War That Time Forgot 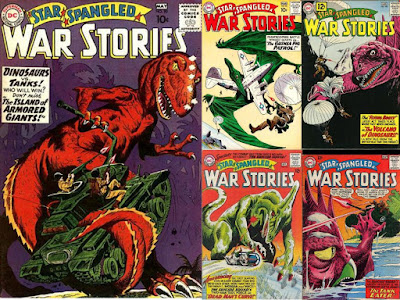 Dinosaur Island premiered in Star Spangled War Stories #90 (April-May, 1960) by Robert Kanigher, Ross Andru and Mike Esposito (though the island didn't get that name until later in the series), and started a series of loosely connected stories featuring soldiers versus dinosaurs during World War II, but with some regular sub-features that it introduced like... 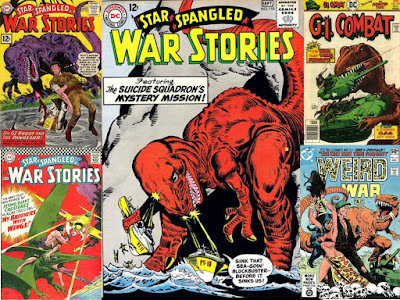 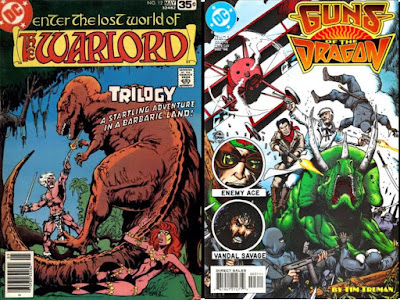 ...with Dinosaur Island "settling" post-Crisis to be a part of Warlord's Skartaris (and even being a place where Bat Lash and the Enemy Ace fought Vandal Savage in the 1920s before these stories....). 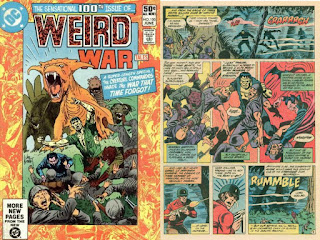 The Creature Commandos were assigned to follow up on missing recon patrols near a series of Pacific Islands, looking for a Japanese convoy.

There, they encountered Japanese troops (as well as plenty of dinosaurs), with both Shrieve and the Japanese commander realizing that the dinosaurs could have uses as troops as well. 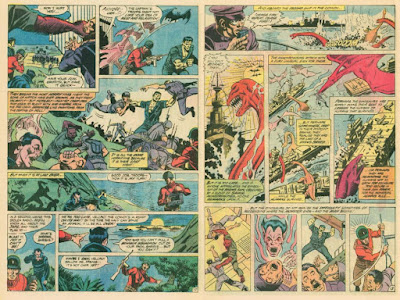 Lucky (the patchwork man) destroyed Shrieve's camera, with Velcro (the vampire) explaining that he wouldn't let them exploit the dinosaurs, who were just mindless creatures, unlike the "monsters" of the Creature Commandos they already have in service.