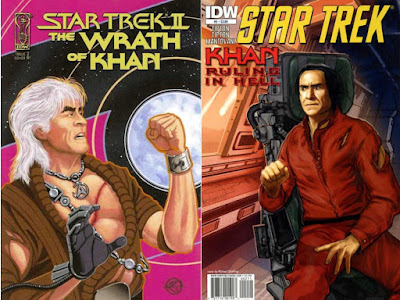 ...he was better known as the genetically enhanced man from the 1990s, Khan Noonien Singh, from the 1967 Star Trek episode "Space Seed" and the movie, Star Trek II: The Wrath Of Khan (1982). 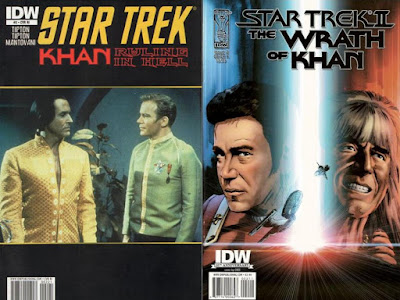 While Kirk, Spock, McCoy and the rest have had many of their exploits told in comics...

...Khan has only recently had his adventures told in the funny pages, thanks to IDW. 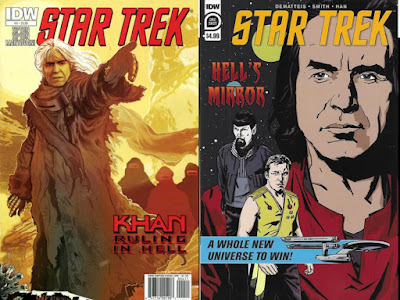 Major appearances of Khan in the comics include the two mini-series, Star Trek II: The Wrath Of Khan (June-July, 2009) and Star Trek: Khan Ruling In Hell (October-January, 2010/2011) , as well as the recent one shot Star Trek: Hell's Mirror from August, 2020, detailing the adventures of the mirror universe Khan. 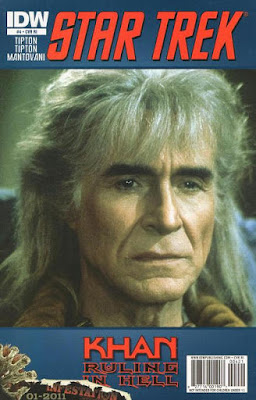 Fans of Star Trek will always remember Montalban's portrayal as Khan: "He tasks me. He tasks me and I shall have him! I'll chase him 'round the moons of Nibia and 'round the Antares Maelstrom and 'round perdition's flames before I give him up!".

Posted by Dave's Not Here Comic Blog at 8:13 AM