First Issue Plus One: Warlord 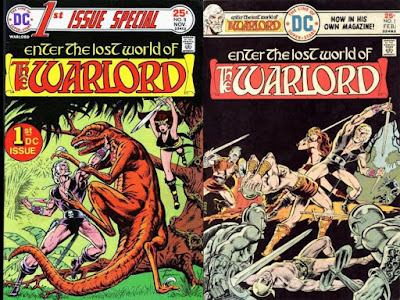 It's a simple enough story...man finds incredible land...a jungle paradise with an eternal sun...a beautiful woman...and more dinosaurs and other menaces to shake a sword at for a score of lifetimes....that is the saga of the Warlord!
But, that's the overall story....time to take a look back at the first couple of issues that featured Travis Morgan, and his time in Skartaris! 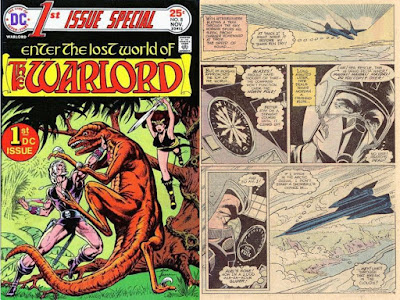 The saga of the Warlord begins in 1st Issue Special #8 (November, 1975; by Mike Grell), starting where most barbarian sagas start...., on June 16th, 1969, with Air Force pilot Lt. Colonel Travis Morgan, piloting his SR-71 over Russia, to take pictures of a secret installation, then being followed by the Russian Air Force, damaging his plane over the tundra, forcing him to make a desperate attempt escape over the North Pole as his fuel was leaking out...wait....what?
Yes, this starts a sword and sorcery book.  As Morgan goes over the North Pole, his compass becomes useless, and he follows the horizon....until he spots a cloudy land in the water, and figures that's where he can safely eject, but he had no idea that he'd end up in a tropical jungle. 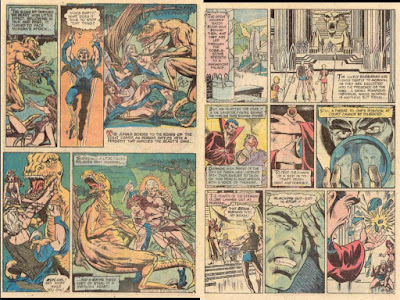 Even bigger surprise as he checked his supplies in his survival vest....that of a beautiful young barbarian woman fighting a dinosaur!  Morgan joined the fight, distracting the dinosaur enough for the woman to finish it.  Times didn't get any easier, as the pair were set upon by armed soldiers, whom Morgan used most of his ammunition against, but the two eventually were took to King Baldur of Thera and his high priest, Deimos, where Morgan used his last bullet against a sphere of Deimos' that was probing Morgan's mind. 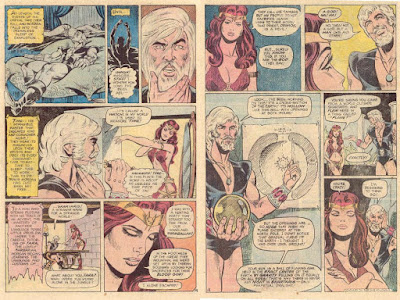 The two were kept together as prisoners, and Tara (the young barbarian woman) taught Morgan their language, and of Skartaris, the world of the eternal sun, while Morgan tried to explain to her his plane, and that this world likely was inside his, where he came through an opening over slowly sloping ground (crazy, right?).  After assassins tried to kill the pair, Tara and Morgan escaped, planning to go to Tara's land of Shamballah....and into the next issue! 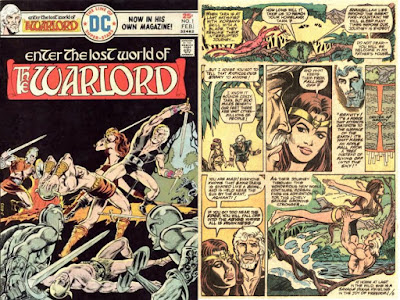 Warlord #1 (January-February, 1976 by Mike Grell) continued the saga of the Warlord, as he and Tara continued the trek to Shamballah, with Tara teaching Morgan swordplay along the way as the pair grew closer (Tara was quickly becoming the love of Morgan's life).
Along the way, they had to avoid dinosaurs and slave traders, seeking refuge in a cave.  There, Tara showed Morgan a crude compass she had. 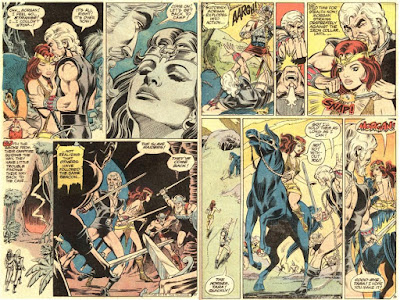 As they rested for the night, Tara was hypnotically taken by a satyr.  Thankfully, Morgan was awoken by the music, followed her trail, and ended the menace.  But, when they returned to their cave, the slave traders had found it, and, after a fierce battle, captured the duo to take them to the slave markets.  Using his titanium dog tag chain, Morgan started to work on breaking Tara's bond, eventually being discovered, but still being able to free her.  Putting her on a horse, Morgan sent her off as he faced the slave traders.  Eventually, Morgan succumbed to the superior force.  In revenge for the lives he cost them (as well as Tara and what her sale would have made them)....they left Morgan to die.....and readers waiting for the next issue! 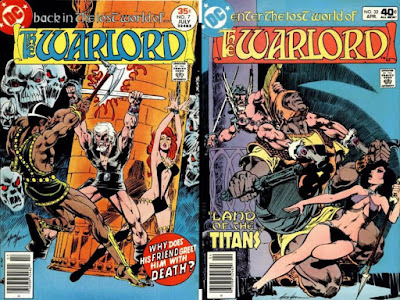 Yes, the next issue did resolve that cliffhanger, and started a trend of Morgan fighting for freedom, and his making friends, starting with the warrior king, Machiste, who helped him train in the slave pits, and the two found freedom.  More friends came, including Russian archeologist and spy Mariah (who was a saber champion), and even Shakira, a woman who could turn into a cat (or is that a cat who could turn into a woman?) with knowledge of ancient Atlantis (the source of the advanced technology found all around Skartaris).  Morgan even found his plane wreckage, and a gun with an incredible amount of ammunition! 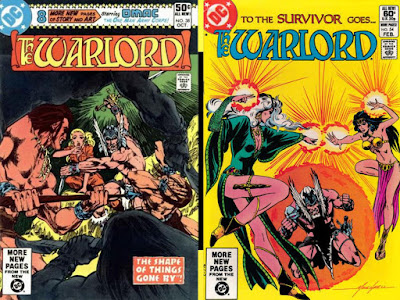 Morgan reunited with Tara, and fought Deimos (many times), and even had his daughter from the surface, Jennifer Morgan, come look for him....and, after Morgan's last encounter with Deimos, Jennifer learned real magic from Ashiya (who used real magic for Deimos, as he mostly used Atlantean technology before his encounter with Morgan). 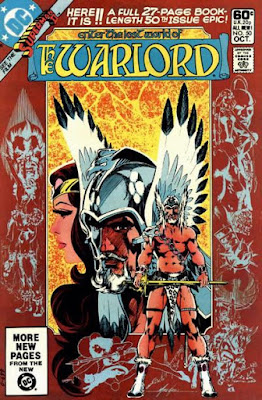 The Warlord saga would unfold over 133 issues and 6 annuals in its original run, the first 50 written and drawn by Mike Grell, (and well after Grell left, touching the Crisis on Infinite Earths and more of the DC Universe, though not meeting other 1st Issue Special alumni like Atlas, Lady Cop, Manhunter or the Dingbats; though Dr. Fate , Power Girl and even Orion and the New Gods might fit in).
With plenty of swords, sorcery and science all mixed together, and starting with the second issue, a two-page spread to start the issues, then later, along with a motto that should serve you well anywhere, anytime..."In the savage world of Skartaris, life is a constant struggle for survival.  Here, beneath an unblinking orb of eternal sunlight, one simple law prevails:  if you let your guard down for an instant you will soon be very dead.".
Posted by Dave's Not Here Comic Blog at 12:55 AM