First Issue Plus One: Doctor Fate 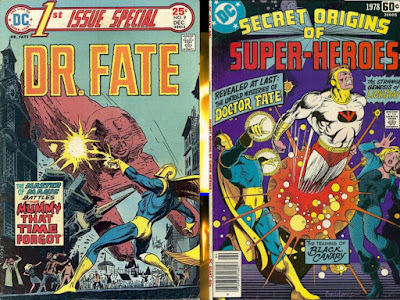 Digging into the history of Doctor Fate, one sees that he had one era where he had shown as a particularly bright light....

Being a major player in JLA/JSA team-ups was not his only function at this time, as he had two solo ventures worth taking a look at!

Here they are, appearing as if by magic!

The Mummy That Time Forgot 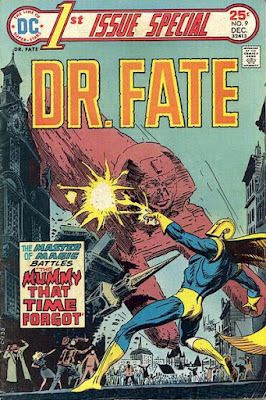 First up is the first Dr. Fate solo tale since the 1940s, 1st Issue Special #9 (December, 1975) by Martin Pasko and Walt Simonson, all under a cover by Joe Kubert.


This issue was a great showcase for the golden gladiator, introducing readers of this issue to Kent Nelson, archeologist, who lives in a mystic tower in Salem, MA, with his wife, Inza...

...all the while harboring the mystic entity of ancient Lord of Order Nabu, which when Kent dons his helmet..

...turns Nelson into the protector of the universe, Doctor Fate! 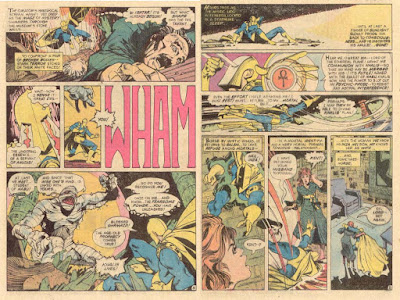 This issue starts in the Boston Museum of Egyptology, where a great evil breaks loose, one that Dr. Fate has feared...that of Khalis!  This animated mummy attacks the doctor, taking away his mystic amulet, with Fate heading back to his sanctuary, and removing the helmet of Nabu, allowing Inza to care for the injured Kent Nelson.   Inza tries to care for her husband, but curses the fates that make her share him with Nabu, and leaves their tower.

Kent awakens, to go to study about Khalis....who was a follower of Anubis in 2030 B.C., and causing chaos in the Egypt of that time, until Nabu came and stopped the mad sorcerer, who was punished by being mummified alive, with Anubis insuring Khalis would stay alive, to come back at some future point to retrieve the amulet of his power...and that day was today! 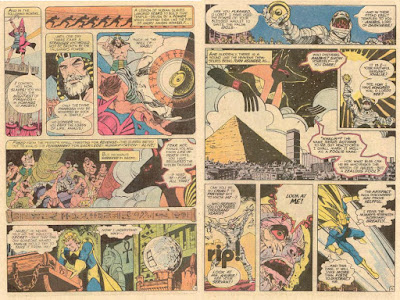 Kent also reflects on his own origins (more on this later), and Inza feels she stormed out too quickly, yet goes to investigate the museum Khalis came from.  Nelson becomes Dr. Fate again, chasing after Khalis, and using what power he has available, but still unable to defeat his foe, at least until Inza arrives with a piece of Khalis' sarcophagus with Nabu's seal....giving Dr. Fate the ability to stop Khalis' plan to turn modern Boston into ancient Egypt by invoking the power of the Egyptian sun god, Amon-Ra.

Once the battle is completed, Inza and Kent reunite, getting back the amulet, and figuring out a way the three of them can live together.

A stunning story by Marty Pasko that added a little of the Egyptian look to Dr. Fate's bag of tricks, especially the use of the Ankh, all thanks to Walt Simonson's vibrant art. 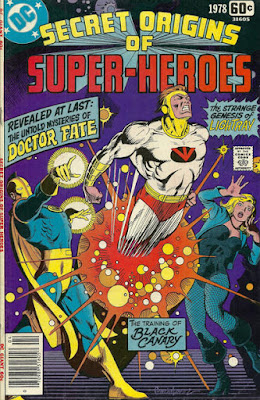 All that, but only a hint of the origin behind Dr. Fate.  DC Special Series #10 (1978) by Paul Levitz, Joe Staton and Michael Netzer explores his origins more fully, expanding upon the original tale told back in More Fun Comics, all under a cover by Jose Luis Garcia-Lopez.

This issue starts with Inza brooding in Dr. Fate's Salem Tower, poring over the tomes that give life to Dr. Fate's history.


Young 12 year old Kent Nelson was accompanying his archeologist father, Sven Nelson, onto a dig in Sumeria, when the boy stumbled upon the sleeping form of Nabu, releasing him from his suspended animation (with the gas keeping him under killing Kent's dad). 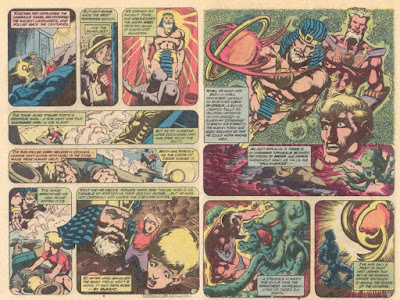 Now alone and grief stricken, Kent's anguish was replaced by Nabu's magic, as the Lord of Order explained that he was a host to an ancient mystic power, that had been hibernating since his battles in ancient Egypt, waiting for this day, when he could teach a new student the mystic arts, to prepare that body to be his new host to fight the forces of chaos across the multiverse.  Nabu gave Kent the amulet of Khalis and helm of Nabu, and, accepting them....became Doctor Fate.

But, Kent didn't know that would also mean handing control of his body over to Nabu, a fate which Inza was still wrestling with.... 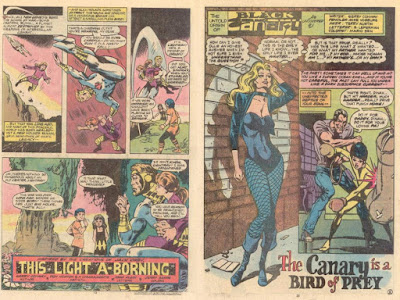 This issue also contains origins of the New God, Lightray, and Dr. Fate's fellow Earth-2 inhabitant, Black Canary (though her origin is more complex than the one told here, as it is the Earth-1 Black Canary relating the origin of her mother, the Earth-2-Black Canary).


These will be tales explored at a different time. 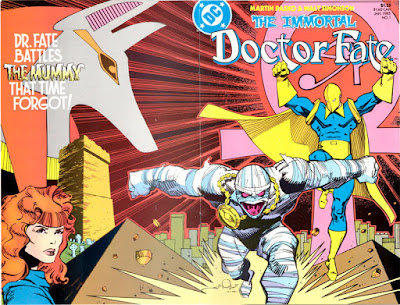 Looking for an inexpensive way to read these classic tales?  Look no further than The Immortal Doctor Fate #1 (January, 1985), that reprints these two stories, along with a classic Golden Age adventure of Dr. Fate vs. Wotan, all under a wraparound cover by Walt Simonson, the first of three issues reprinting Dr. Fate (the next two focusing on stories from his time as a back up in the Flash), showing off the magic that is Dr. Fate!