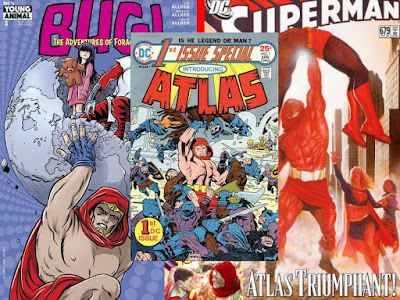 ...but, likely even the "King" wouldn't have been able to predict the strange turns his life took over the years! 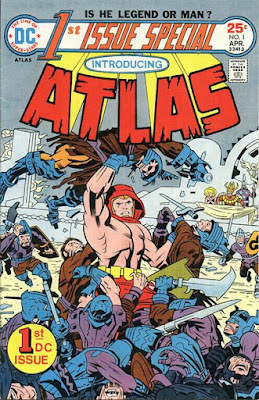 Atlas' story started in First Issue Special #1 (April, 1975), by Jack Kirby and D. Bruce Berry, where readers were introduced to "Atlas The Great!".

First, readers see Atlas fell Kargin, the champion of Hyssa the lizard king in a land out of time, then a flashback to Atlas as a boy, as his father was killed by the forces of King Hyssa, and only due to his unnatural strength and ability did Atlas escape.  Being found by Chagra the seeker, who learned the lad got his powers from a shard of the Crystal Mountain (a land Atlas was from).  The two traveled together, as the boy grew into a man, and with his great strength, Atlas also had great heart, saving many villages from various evils, with Chagra there encouraging him on, so Atlas could have a final confrontation with the lizard king, and then take Chagra to the Crystal Mountain.

That's where the only 20th Century produced comic of Atlas ended.... 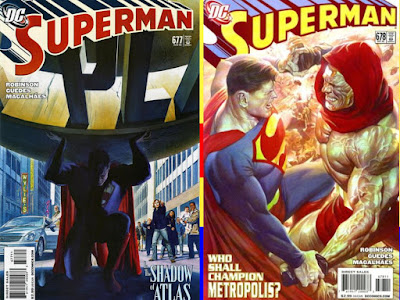 Atlas' first return was in Superman #677 (August, 2008) starting a four issue run of "The Coming Of Atlas" by James Robinson, Renato Guedes and Jose Wilson Magalhaes (and covers by Alex Ross), where Atlas was torn from his quest and Chagra, and found himself in a land not his own...

....that of modern day Metropolis. 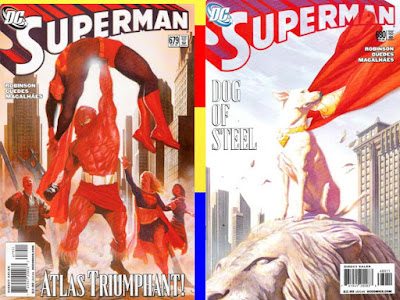 Atlas stops a creature from invading Metropolis, but finds himself at odds with Superman.  For some reason, being near Atlas makes Superman weak, giving Atlas an advantage.  Atlas was brought forward through time and works for General Sam Lane against Superman.  Supergirl comes to Metropolis to help Superman, but fairs no better, and it takes the help of Krypto, Superman's superdog, to finally defeat Atlas in Superman #680 (November, 2008) due to the dog's magical nature (as revealed by Zachary Zatara). 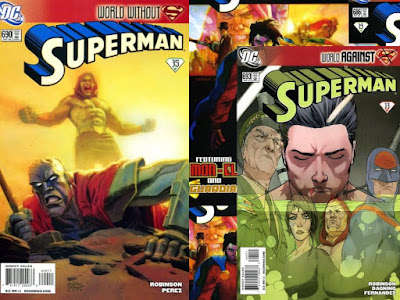 Atlas remained in the 21st century (and Superman titles) for a time after his, having a battle with Steel, meeting fellow Kirby creation of the Guardian (as well as fellow First Issue Special headliner, Codename: Assassin), even meeting Batman in an issue of Justice League of America (#42), as well as dealing with the temporary new protector of Metropolis, Mon-El. 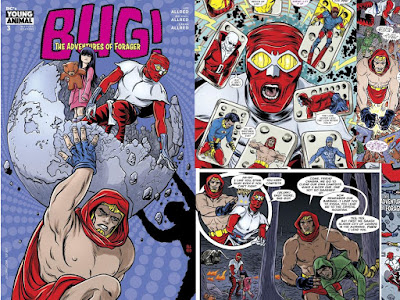 Atlas' next return was as a part of 2017's Bug! The Adventures of Forager by Michael, Lee and Laura Allred, which follows the adventures of the Forager (a Kirby creation that met an untimely end in Cosmic Odyssey).  This six issue mini-series follows his adventures through time, meeting many of Jack Kirby's characters, including two different Sandman, one Manhunter, OMAC, the New Gods including Mr. Miracle, even the Deadman robot Kirby used in the Forever People....and Atlas and his helper, Chagra (Chagra was even more important to the book than Atlas). 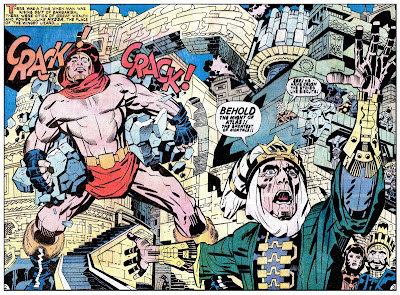 Trying to tell you the plot of this odd story is pointless, so instead, using a phrase Kirby once used...."Don't ask -- Just Buy It"....if you are a fan of Jack Kirby, and an odd continuity between all his characters, seek out this book and wonder of Atlas' adventures could begin anew!
Posted by Dave's Not Here Comic Blog at 4:10 AM