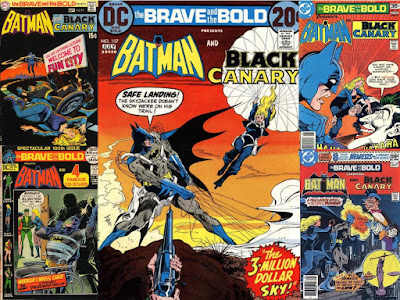 Batman had been at times a lonely vigilante, but, every once in a while, he was able to get some help, from a fellow member of the Justice League.  Black Canary had accepted many changes in her life, and after joining the JLA, was willing to work with her new teammates.

So, team ups between these two were a great idea, and made for many a fun issue of Brave and the Bold.

Time to take a look at their meetings!

Brave and the Bold 91 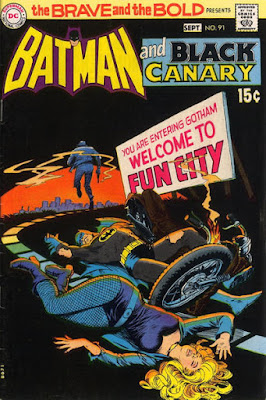 Batman's first solo team-up with Black Canary happened in Brave and the Bold #91 (August-September, 1970) as the duo had to deal with "A Cold Corpse For The Collector" by Bob Haney and Nick Cardy.

This issue has Batman dealing with criminal syndicates, with the Collector, a hit man, taking out mob boss Rhymer's men.  Meanwhile, Black Canary was getting use to life on Earth-1, chasing down Larry Lance, the man, who on the alternate world of Earth-2, was her husband (or so she thought, later changes made this....odd).  Still, at the time, Dinah Lance was looking for Larry, who was also looking for the Collector....or, was he?  With Black Canary running interference for him, it is true Larry could purse the Collector unfettered, but, it was also preventing Batman from finding the Collector.  The pair realized...Larry was the Collector, with Lance dying accidentally during a fight with the Batman.  This also helped Dinah realize her old life was gone (and along with her JLA appearances at the time, was also working with Green Lantern and Green Arrow in their title). 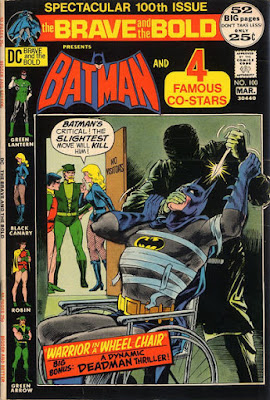 In fact, Black Canary's return to B&B had her working with Green Lantern and Green Arrow as well as Batman and Robin in Brave and the Bold #100 (February-March, 1972) in a story by Bob Haney and Jim Aparo (under a cover by Nick Cardy) entitled "The Warrior In A Wheel-Chair".

As Batman is taken out by a sniper's bullet, with only the talented Dr. Hellstrom between health, paralysis or death for the Caped Crusader, Batman's friends had to come to the forefront to stop a shipment of cocaine into Gotham.  None of the leads pans out for any of them, but Batman is about to undergo an operation, when he realizes his doctor is really the druglord, Belknap, trying to finish off the Batman.  The other heroes stop him, and Green Lantern goes to get the real doctor, who finds Belknap's stash in the equipment in the operating room.  After the operation, Batman recuperates, thanking his friends for the help. 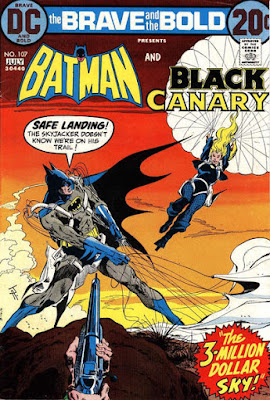 
Plane hijacker Willie Kresh wants 3 million dollars and the release of Monk Devlin.  Batman and Black Canary sneak aboard the flight as a pilot and stewardess to stop the theft, but the plane crashes, with Batman and Black Canary having to stop the crooks, and recover the money from a local bandit.  By luck, the heroes win this one, as the criminals turn on each other, with Willie and Monk killing each other, leaving the money and their corpses to be taken home by the heroes. 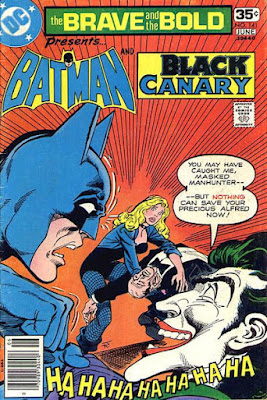 Batman is investigating the deaths of some Gotham businessmen, as Black Canary also has one of her business partner's murdered, so the two team up and find that they all had been in debt to a loan shark by the name of Mr. Longreen.  They then realize that "Longreen" is really a possessor of a "long grin"....the Joker!  Batman then volunteers his butler Alfred to get a loan, so the heroes can track how Joker gets his victims.  Sadly, that way is found...that Joker doses his victims with a slow acting chemical that will cause them to explode if they don't get a cure.  As Black Canary almost finds the Joker in his hideout, she gets captured, making Batman work to save her and capture the Joker instead of saving Alfred.  Joker is overjoyed that he'll get to watch Alfred die, until Batman realizes the cure is in Joker's blood, which he give some of to Alfred via a transfusion.  This saves Alfred, who is none too happy to have Joker blood in his veins. 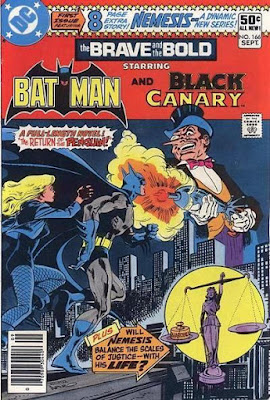 Black Canary's last team up with Batman in B&B was in Brave and the Bold #166 (September, 1980) in "Requiem For 4 Canaries" by Michael Fleisher, Dick Giordano and Terry Austin (all under a stunning Jim Aparo cover, in an issue that also featured the premiere of Nemesis in a separate story).

Batman deals with a breakout at Gotham State Penitentiary, capturing most of the escapees except for the Penguin, who Batman deduces might be headed to Star City in search of his four former henchmen who turned against him.  That is true, as Penguin is beginning a crime spree in Star City, using a canary theme, which is when Black Canary catches wind of his scheme, as Penguin gets his first of 4 victims.  Working with Batman when he arrives, the pair still fail to save the second of Penguin's targets.  Penguin then changes tactics, instead trying to eliminate Batman....by sending Black Canary after him?  Well, to be fair, Penguin had kidnapped Black Canary first, then sent out a look-a-like in Dinah's costume to kill Batman, but he stopped her, and went to Penguin's hideout to defeat the fowl bird....and loan a scantily clad Black Canary his cape until she can get her costume back, earning Batman a kiss for his chivalry. 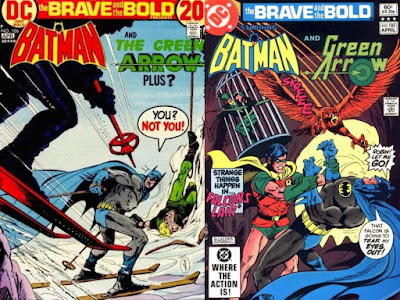 It's Black Canary's occasional attraction to Batman that might explain why Batman/Green Arrow team-ups are sometimes less cordial, though, to be fair, Black Canary has also had problems with Batman's paramour, Catwoman.
Posted by Dave's Not Here Comic Blog at 4:11 AM